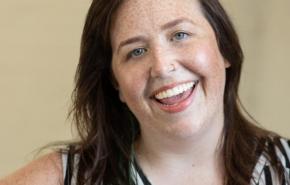 KATIE HILEMAN (she/her) is a fat DIY theatre maker working out of Baltimore, MD. She is passionate about developing and producing high quality, meaningful new works for the stage by local artists on a tiny budget. In her work, she strives to create brave spaces for collaboration, expression, and storytelling to take place with a consent-based, trauma-informed practice, while working to dismantle the Corporate Theatre Machine that favors the thin, white, cis-male, and beautiful. Katie believes that... more

i will eat you alive.

You are cordially invited to a dinner party to celebrate one fat woman’s decision to lose weight. Join us for a delicious, five course meal examining diet culture, representation, and what it’s really like to be a fat woman+ in today’s society. There’s singing. There’s dancing. There’s even cake. Because we all deserve dessert! (In moderation of course!) Remember: nothing tastes as good as skinny feels, right?

"i will eat you alive" was inspired by and written after a series of interviews conducted between fat playwright, Katie Hileman, and a community of self-identified fat women+.

We are fat. We are here. And we will eat you alive.

Plans for a Baltimore remount and subsequent 2021 tour cancelled due to COVID-19.

Recently single actor Kate is given an opportunity to play Virginia Woolf. As she struggles to make a self-tape audition in an uprooted life, she finds guidance, wisdom, and inspiration from various witches that she meets along the way. Their magic seeps into Kate’s creative process with surprising results. Modern Witches is a multi-character solo show inspired by the life of Virginia Woolf that examines the characteristics of women beneath the label of "witch".

All photos and promotional material by Kiirstn Pagan

OLGA Presents: a Stand-Up Show!!! (or The Alibi Play) by Jen Diamond
Directed by Katie Hileman

Comedy duo OLGA is super psyched to perform for you a brand new night of stand up comedy!!! Well, they would be psyched – except Jen’s boyfriend just broke up with her in a frozen yogurt shop. And Pam is unemployed and unable to buy a Bitcoin. And something really, really bad happened just a few hours ago and it might just change both of their lives forever. Half stand up, half theatre, The Alibi Play is a comedy that kaleidoscopes reality, fantasy, and friendship to figure out what it means to be a truly Good Person.

The piece was a recipient of the 2019 Maryland State Arts Council Creativity Grant. The show was named one of the “Best Things To Do in Baltimore” by Baltimore Magazine.

All photos by Kiirstn Pagan

Nothing Tastes as Good as Skinny Feels

Two women named Before and After meet in a gym. They talk about their own bodies, each other's bodies, and fight over a slice of pizza. Does nothing really taste as good as skinny feels? Or is that just a myth fed to women to get them to hate themselves and each other?

Mae is single and ready to tingle... Based off of a story from a close friend of her contracting chlamydia from a Tinder hook up, Chlamydia reimagines Tinder as a game show host, leading Mae through different dates with The Fuckboys. The Fuckboys were all played by women, and their spoken text was taken from real screenshots provided to me by my close friend, and others, of their actual interactions with men on Tinder. Mae dates, she fucks, her vagina sings the cha-cha slide, but ultimately she learns that men are, and always will be, trash.

“This night was SO MUCH fun, I can’t even contain it on a page. It will be talked about forever in the mythical circles of ‘I was there’… I think what I appreciated the most about the evening was not just the energy and fun, but the tribute to non-standard sex and people. I am not a prude, but that was my first time seeing some of these things in person and on stage.” —Baltimore Independent Theater Review (BITR Sisters)

One Night Stand was a love/dating themed, sex-positive, one-night-only cabaret. It premiered to a sold out, standing room only crowd. This began as an idea for a variety show fundraiser for Interrobang, but turned into a huge sex-positive celebration of local performers. Kiirstn and I hosted the evening, and presented our performers, along with several comedic bits featuring sex toys from our sponsor, Sugar.

Plans for One Night Stand 2 were cancelled due do COVID-19.

In January of 2019, the Towson Theatre MFA 2020 Cohort made a trip to study abroad in South Africa. Left mostly to our own devices on the trip, we, of course, came up with a last minute cabaret performance at a local cafe called The Drawing Room. Each cohort member presented a short piece. This was my piece inspired by my time spent in South Africa in a fat body (at the height of my eating disorder with a recently broken heart). This was one of the first pieces I ever shared publicly about my fatness, and set the course for my writing work moving forward.

This was a one night only event open to locals and other students on the trip. Very casual and stripped down. The title of the cabaret, American Heifer, was an inside joke amongst the cohort, but as I thought about what I wanted to present, the title seemed to resonate with me further than something just light-hearted, so it became the title of my monologue as well.

Connected by jumper cables for the entirety of this 10-minute play, a couple navigates the overwhelming electricity of their relationship and connection to each other by jumping through time and form and a gas station.

There were no other set or props used to tell the story besides the jumper cables. Originially conceived as part of Single Carrot Theatre's 24-Hour Play Festival. This play was part of a one night only, sold out variety show called Charm City Nights on the Fringe.

All Photography and Video by Kiirstn Pagan