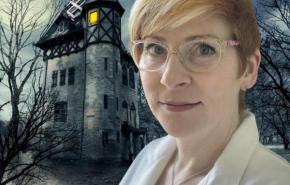 Kathy Flann is an award-winning prose writer, whose work includes fiction, nonfiction, and humor. Her most recent book – How to Survive a Human Attack: A Guide for Werewolves, Mummies, Cyborgs, Ghosts, Nuclear Mutants, and Other Movie Monsters (Running Press) – was featured in The New York Times/Wirecutter article, “The Gifts We Want to Give.” It was also featured as a “Scary Book of the Week” on the Hachette Novel Suspects site, where an excerpt appeared, a chapter entitled “The 6(66) Habits of Highly... more
See 2021 $2,500 Baker Artist Award Winning Portfolio
View Kathy's Resume

How to Survive a Human Attack

This is a series of advice pieces for movie monsters such as zombies, mummies, and swamp monsters. Everyone is always trying to kill these creatures, and these are guides for avoiding that fate. Partly, the pieces are a bit of fun. Partly, they are an exploration of the subjectivity of the concept of "monsters." Movie villains undoubtedly perceive themselves as the heroes. The book was selected for The New York Times/Wirecutter article, "Gifts We Want to Give."

Selections from the book have appeared in Weekly Humorist, Monkeybicycle, Defenstration, and elsewhere. On the basis of them, Flann was invited to appear at "An Evening of Humorous Prose," in Washington, DC, along with writers from Cracked, The Onion, McSweeneys, and TV's "Late Night with Seth Myers."

"How to Survive a Human Attack: A Zombie's Guide to Filling the Emptiness and Moving Forward"

"How to Survive a Human Attack: A Mummy's Decree (Papyrus Edition)"

"How to Survive a Human Attack: Swamp Monster Makeovers"

"How to Survive a Human Attack Appendix I: A Compendium of Human Repellents"

Kathy has contributed reflections on writing and life for  The Washington Post Magazine, The Gettysburg Review, The Texas Review, Baltimore Style, Baltimore Fishbowl, Stay Thirsty Magazine, and other publications.

She was a short fiction writer for years, and one of the appeals of the form was the invisibility it afforded. Readers would (she hoped) be focused on the fictional characters and plots rather than on the writer herself. The impetus to pivot to nonfiction, even with all its vulnerability, was a simple urge to pay homage to her dog. After all, the dog had saved her from a fire and seemed unlikely to write its own memoirs. As the pieces evolved, the work seemed really to be about grief and loss. Occasionally, there weren't even dogs in them.

Humor can serve as a release or even as a form of defiance. Against the backdrop of grief and struggle -- whether personal or collective -- humor may provide a tiny lift from emotional weight we carry. After all, what is a laugh if not a deep breath, the chance for a pause, a renewal in miniature?

The stories in Get a Grip depict a range of imagined lives. There are Estonian brothers trekking from their  neighborhood to a college interview. There’s a TV meteorite hunter in town to search for otherworldly treasure. We meet a widow addicted to physical pain and a successful ad executive who loses all his worldly possessions in one day. All of the characters work out their struggles in a partly real and partly imagined Baltimore, channeling, in turns, its charm, its despair, its humor, its self-doubt, its compassion. Get a Grip is a book about who we are when the cameras are off and the phone has died.

"Kathy Flann has created a beautiful work of art, populated by characters who are full of love, fear, loss, courage, and redemption. A brilliant collection, Flann's work restores my hope in humanity and makes me feel more truly alive." --Julianna Baggott, author of Harriet Wolf's Seventh Book of Wonders, a New York Times Notable Book of 2015

"There's a touch of Barry Hannah's cosmic what-the-fuckness running through Flann's short-story collection, the way an intimate scene's humor or horror depends on the point of view. From the woman whose husband died in flagrante with a prostitute to the teacher who gets a hard-on every time he sees his ex-wife in the cafeteria, these eight Baltimore-set stories dive into the lives of people a little bit desperate. Flann animates their responses to such crises with a merciless humanity, and whether you're laughing or crying with the results, you always feel a little empathy and a little, well, unclean." -- Baltimore City Paper

“Kathy Flann’s Get a Grip is a collection of short stories featuring tales with a strong sense of place (for Flann, Baltimore, Maryland) and believable characters in the midst of struggles with identity, relationships and often devastating circumstances…. Reaching the end of the collection, I felt a sort of disappointment creeping in at the edge of my psyche: not with the stories themselves, but with the notion that the reading was finished, which meant that I would cease interacting with such cleverly imagined characters….” --The Literary Review

“These ailments — the neuropathy, the infections, the possible hairline fractures — outwardly manifest for Flann's stunted, afflicted characters an inner fear that they will never again be loved. So much is at stake here….. As they struggle with their dilemmas, these despondent though often hilarious characters become more human for their flaws.” –Minneapolis Star Tribune

“I'd liken the magnetism of these stories to that of a YouTube reel of BMX wipeouts: painful to watch and yet strangely comic as they unfold, braiding both random bad fortune and intimations of inevitability. The slow-motion spills in Get a Grip are certainly more choreographed than an incidental meeting between a human knee and six linear feet of gravel and asphalt, but readers will be too absorbed in Flann's direct and emotionally perceptive prose to peek around for crash pads or strings.”--Carve Magazine

"Kathy Flann writes about Baltimore; all of the characters inside of Get A Grip know Baltimore and breathe it. They might not represent the whole of the city—Baltimore contains multitudes after all—but the subsection that they capture are represented well. They are well off, they are dissatisfied with their success, they are alienated from their family, their friends and themselves. When you read these characters’ stories, you know that Flann knows her audience well..... When you’re finished Get A Grip, you wonder if you truly know how to speak the language of your soul. You spend time thinking about the choices you’ve made, the choices you’ve failed to make, why you have or have not made them. Are you content? Do you just think you are? These are big questions, bigger than you’re prepared to answer, but you’re grateful that a book of short fiction can get you to even think them. You feel melancholy, like your heart has a toothache, but also hopeful. Melanhope. It’s a new feeling." -- Michael Tager, JMWW

"Kathy Flann’s collection of eleven short stories in Smoky Ordinary was a delight for me to read. For example, in her compelling tale, “The Dispossession of Billy Montgomery,” you will find plenty to hold your interest, while having a huge laugh at the same time. Ms. Flann’s fiction stories are centered around Smoky Ordinary, a community located in rural Virginia, just south of Washington, D.C. I highly recommend her book." -- William Hughes, Media Monitors Network

Stories in this collection have appeared in Shenandoah, The North American Review, Quarterly West, The Barcelona Review, New Stories from the South, and other publications.

Writers have reputations for being loners, and yet community is crucial for story-tellers, not only in terms of serving as inspiration for material, but also in terms of bringing material to fruition. It is difficult for most writers to craft a publishable piece without help. Kathy compiled the advice she gives again and again in her college classes, with the intention to support anyone -- whether inside or outside a college community -- through the most common challenges of writing a story. Everyone has a story to tell, and with some adjustment to technique, the story may be positioned to the reach people who need to hear it.