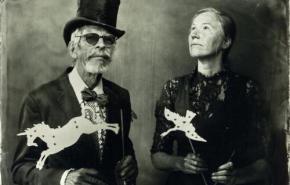 I am a storyteller, papercut artist, and puppeteer. I mainly make crankies, a form of visual art performance that involves a box containing a scroll of artwork. The scroll is attached to rods with cranks at the top. As the cranks are turned the scroll moves across the front of the box, where the viewer can see the artwork.  I'm a formally trained artist with a degree in sculpture from MICA, however over ten years ago I started my foray into puppetry after seeing some shadow puppet shows and... more
See 2021 $2,500 Baker Artist Award Winning Portfolio
View Katherine's Resume

In 2020 I was commissioned by Willow Garden Films to make two crankies for a documantary about Baltimore musician, folk legend, and activist Hazel Dickens. Many citizens moved to Baltimore to work in factories, to escape the poverty and coal mines of West Virgina. Hazel and her siblings were some of these hard working poor. Hazel went on to become a bastion of the folk music community in Baltimore and then in DC. She also wrote songs of protest bringing awareness to the dangers of the coal mining industry and sexism. I can't share video yet, since the film has not yet been released.

Between Monument and Montford

This shadow puppet crankie piece is based on interviews with Robin Reid, Dan Van Allen,  and the Arabbers* of Baltimore City. It is the story of a young african amercan girl and the magic that the Baltimore Arabbers brought to her neighborhood and her life. Thanks to arabbers who run a stable behing my house and Dan Van Allan, former president of the Arabber Preservation Society I have gotten to know and admire this community as neighbors, collaborators, and as a Baltimore heritage.

*Arabbers are horse cart vendors. Baltimore is the last city in the US to have Arabbers. The word Arabber comes from the Turkish word for horseman.

Projected shadow puppet crankie based on Edgar Allan Poe's The Raven, commissioned by The Peabody School of Music.  Paper and Tyvek scroll. Poster board and foam core puppets and overhead projections.

This shadow puppet show is a combination of various shadow puppetry techniques, incorporating a pop-up book, lazy susans, moving human figures, and overhead projectors. Everything was hand cut with a hobby knife.

This piece was originally performed with Tim Kearly, Valeska Populoh, Eamon Epsey, Channing Showalter, Lisa Kraus, Nick Sjostrom,  and Burke Sampson at The Peabody School of Music on Halloween night of 2016, accompanied by an original musical score and sound effects by Nick Sjostrom and Burke Sampson.

In 2015 I collaborated with Cortina productions, a film company that makes historical films for museums, approached me about making a giant shadow puppet crankie* for a film, I was pretty excited.
The film is about a traveling story teller, who uses a crankie to tell oral histories of the American revolution through 6 different people who lived through it. (among them, a housewife, a native american man, and an african american man). These are actual oral histories of people who lived at the time. It was an inspiring and educational experience working with producer, Brent Feito and a curator/historian, Katherine Gruber of the Jamestown-Yorktown Foundation.
I got to spend months researching, story boarding, making sample scenes, and finally making the final piece. The images are based on artwork and aesthetics of the period. In order to make the deadline friend and colleague, Caleb Stine, worked full time hand cutting paper and glueing down scenes with me for over a month. Some other folks who lent a hand during construction were Annie Howe, Lisa Krause, Christine Sajecki, and Eamon Espey. We ended up with three scrolls, some of which are over eighty feet long. Everything was hand cut with a hobby knife.

It was especially moving to be working on this piece about these questions of freedom and human rights as the riots broke out in Baltimore this year. It felt all the more meaningful and powerful to be revisiting these questions in my work.
After the crankie was done, I finally arrived in Virginia, where they had been filming all the stories I had illustrated on the crankie in live action. Michael Lamason and Valeska Populoh of Baltimore's Black Cherry Puppet Theater came to Virginia where we performed the crankie in period dress for the film.
This has been an exciting and challenging project. The rough cut looks great and I can't wait to see the the final edit of the film. In the meantime there is an exhibit of the making of the film on display at the American Revolution Museum at Yorktown.
The film has been  available to the public since December 2016.

I spent the first part of this year working on a shadow puppet show for a music video for Baltimore band, Wye Oak. I had a lot of fun creating the characters for this underwater world and the process of working with film was a new and exciting experience for me.

Shadow puppet crankie*, based on a song about one colonial woman's struggle to survive a Vermont winter on her own in the mid-18th century.

This piece has been sung it a Capella mostly, but on occasion with a guitarist or fiddler.

Pickett's Charge is a shadow puppet crankie (see definition below). It's the story of a young girl's inner questions about war and the universe.

This exciting venture which began with singer songwriter ellen cherry's poignant song of the same name. We filmed the video with Mike O'Leary over one weekend. He orchestrated the lighting cues so that it was one continuous shot.

I Don't Feel Dead Yet

You can see a video here:
https://www.youtube.com/watch?v=Gew0PM10mqE

Where stars come from

In 1806 two sisters in England published a book of thier peotry fro children. One of them is a song sung all over the world to this day. This Shadow Puppet Crankie was a commision for Kentucky Educational Television Foundation based on Twinkle Twinkle Little Star. Video available here.
https://www.youtube.com/watch?v=5KZLDh4N9YY

Bury Me Not on the Lone Prairie

In 2021 I was commissioned by California's Ismay Music to make a crankie* for a short film based on the folk song, Bury Me Not on the Lone Prairie. I reinterpreted the song to be about the death of a horse instead of a cowboy. I also included cowboys of diverse race, gender, and ethnicity  in the piece, which have been often underrepresented in Amercan films. This piece was an exciting exporation of new shadow puppetry techniques which I had time to focus on learning this year. The music you hear is Ismay and the video was filmed and edited by Baltimore's Julia Golonka.

* A crankie or moving panorama is an old fashioned form of visual performance, device. It is a hand cranked scroll in a box. The artwork is rolled around two posts, which is then pulled across the front, much like film in an old camera. This crankie combines papercuts and shadow puppetry.