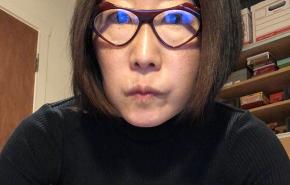 I created 6 FT EVIL EYE MASK in 2020 for MASKerade Baltimore–a fundraiser hosted by the Baltimore Community Foundation's LGBTQ Fund and Maryland Art Place to raise awareness and funds for issues facing the LGBTQ community in Baltimore. Both BCF and MAP are non-profits that I support.

I was interested in the way MASKerade encouraged artists to explore masks as form and fashion, and as political and social signifiers. As the daughter of Korean immigrants in the US, I have a long, self-preserving interest in fashion as social signifier. In the groundbreaking book Minor Feelings: An Asian American Reckoning, Cathy Park Hong touched on this role of fashion when she wrote about David Dao, the Asian-American doctor who was brutalized and dragged off the United flight in 2017. She compared his black Patagonia sweater and khaki cap to camouflage, code for “I am not one to take up space or make a scene.” Horrifying because he looked like Dad to many of us.

I can see parallels between how the Asian community has been scapegoated for COVID and how the gay community was scapegoated for AIDS…. 6 FT EVIL EYE MASK does not blend in. The mask takes up space and makes a scene. Inspired by Met Gala gowns, voguing, and Rupaul’s Drag Race, I tried to create a mask with bling that demands us to look and pay attention.

The photo-collages in Transit are drawn from scans of Julia Kim Smith’s father’s slides from the period 1955-1973, the period before her parents became naturalized American citizens. If Smith’s father’s photographs were his way of “claiming” America and his life in the United States, her photo-collages are a way of reclaiming her family’s immigrant history and herstory. She cull images from the slides and layers them to create new meanings and perspectives, the perspective of one who is “over there” but does not yet belong. Taken as a whole, the photo-collages examine what it means to become American.

The series title Transit references Anna Seghers’ fictional novel Transit based on Seghers’ experiences as a German refugee in the 1930s. Peter Conrad, in his introduction to a reissue of Seghers’ Transit, noted “The novel’s blunt but richly allusive title suggests that these are people in transition, and not only between countries: they commute up and down on what theologians once saw as the chain of being, some aspiring to the status of spirits, others behaving and even coming to look like beasts.” Smith’s Transit echoes Seghers’ and serves as a paean to the vulnerability and complexity, the spirits and the beasts, of her immigrant family.

American As Fuck appropriates phrases typically associated with the right-wing and explores the boundaries and intersectionality of what it means to be an American and a patriot.

Sticker and T-shirt made in Baltimore: created and designed by Julia Kim Smith, printed by Momentum, and sold exclusively at Atomic Books and Sideshow at The American Visionary Art Museum. Every sticker and T-shirt makes an impact: We donate 100% of profits to The Creative Alliance of Baltimore.

The limited edition postcard, commissioned by the The Creative Alliance and printed by Typecast Press, is available in an edition of 200, each signed and numbered by the artist. Text on front reads “Baltimore: Actually, I like it.”; text on back reads “Dearest_______,” to be completed by the sender.

“A trending unofficial civic slogan declares ‘Baltimore: Actually, I Like It,’ which best captures the mix of resignation and defensiveness that comes from residing in a place long synonymous with what’s wrong with American cities. This may never be a Portlandia-style urban playground, but the raggedy pleasures of Baltimore living are real and durable, and can be found no where else. That’s why we’re here, and why we stay, even though sometimes we all feel like tearing the place down.”
Grist, David Dudley, “Why Baltimore is fighting for its life, again,” April 2015

Community–it’s no walk in the park.

Cylburn Park is a text movie in two acts inspired by and edited from a Baltimore neighborhood’s Google Group daily feed and the media’s coverage of it (below). The texts scroll by at a quick pace as if on a teleprompter screen and include lively exchanges over ducks and racial profiling, offering different perspectives from “bitchy” indeed to high-minded and deeply moving. Cylburn Park is relevant today in Baltimore and beyond as communities struggle to keep it together.

BEST SOMETIMES-RACIST GOOGLE GROUP
“For cringe-worthy entertainment, nothing beats reading the daily feed from the Mount Washington Google Group, the provenance for overly educated people with too much time on their hands and axes to grind. Aside from the mundane stuff–free kids’ toys and recommendations for dentists–the group’s archive of bitchy exchanges over whether to allow ducks to live in the community garden nearly brought some residents to blows. The Group’s Greek chorus really pulls out all the stops when teens from the Pimlico neighborhood are spotted in Mount Washington. Accusations of racial profiling are never funny, but you’ve gotta roll your eyes when Mount Washingtonians call each other ‘moron’ and ‘ass’ as they try to sidestep their own prejudices.”
City Paper’s “Best of Baltimore 2013”

“The internet poses significant problems in female representation, from pornography to the use of female form in advertising and notably the use of sexually violent language as a form of censorship and aggression towards female expression. Exquisite Corpse presents an array of female artists using both online and material forms for creativity, empowerment, and subversion, whilst reclaiming control of the representation of their bodies.”
Sarah Faraday, Curator, Exquisite Corpse, Fuse Art Space, Bradford, UK and Cologne, Germany

ARTIST STATEMENT
In 2015-16, I participated in Exquisite Corpse, an exhibition at Fuse Art Space in Bradford, UK and Cologne, Germany, featuring the work of hot (professionally hot, that is) fourth-wave feminist artists Rupi Kaur, Kate Durbin, Faith Holland, Poppy Jackson, Sue Williams, among others. The exhibition challenged the misrepresentation of the female form and identity on the internet. I screened Why, a film in which I utilized Google’s search engine’s autocomplete feature to find out what the masses wondered about me, an Asian woman, and discovered unsettling truths, fallacies, desires, and fears about many of us.

In conjunction with Exquisite Corpse, I took over Fuse Art Space’s Instagram account, posting from my series The Daily Pad–images created from Kotex products and blood–for six days, the duration of a period. The Daily Pad is a humorous, Dadaist challenge to those who view female sexuality, including menstruation, as a taboo to shame, censor, and silence. Sometimes the only rational response in the face of irrationality is to stop making sense.
— Julia Kim Smith

The Real Wi-Fi Of Baltimore (Are U Connected?)

PRODUCTION NOTE
“Baltimore is the world. The world is Baltimore.”
Your Face In Mine, Jess Row

In the wake of the Freddie Gray uprising, I was traveling around Baltimore, lost and looking for a Wi-Fi connection, and was fascinated by the Wi-Fi network names that came up on my phone. I started taking screenshots which I edited into a short film. Thanks to a Rubys Artist Grant, I was able to remaster the film for projection on the big screen and combine forces with James Nasty and TT the Artist to produce an original soundtrack for the film, “Are U Connected?”–both a question and a challenge.
— Julia Kim Smith, Director

Receipts calls out and takes ownership of Asian and Asian-American slurs in a series of faux Asian-style scrolls featuring documented racist slurs received on sales receipts from Chick-fil-A, Hooters, and Papa John’s.

“The 5th edition of CURRENTS presents an exhibition in which artists respond to the theme of ABORTION. In this turbulent moment in history, abortion remains a signifier of people's ownership over their bodies, being as urgent a subject as any of the issues that now consume us.”
Barbara Zucker, Curator, Currents: Abortion, A.I.R. Gallery, Brooklyn, NY

ARTIST STATEMENT
Selfie Mirror is a participatory installation piece: A hand mirror is mounted on a microphone stand with the words “In Trump’s America, I am worth nothing.” etched on the front of the mirror and “I am secretly going to burn this thing down from the inside.” etched on the back. A piece of rope is tied to the mirror in a hangman’s noose and an enamel American flag pin is mounted to the mirror.

The work borrows from “Ways I Am Preparing For A Trump Presidency,” an essay by Blythe Roberson.* In Trump’s America, I am alarmed by the rise and normalization of hate crimes and violence. I am alarmed our democracy is teetering into fascism. I am concerned for our future. Diversity is America’s strength, and our diversity is threatened.

My hope is that when viewers get close to Selfie Mirror and look for themselves, they’ll see an image of themselves, and of others, in a different light.
— Julia Kim Smith

*Blythe Roberson, “Ways I Am Preparing For A Trump Presidency,” The New Yorker, November 15, 2016.

Julia Kim Smith utilizes Google’s search engine's autocomplete feature to find out what people are wondering about her, an Asian woman, and discovers unsettling abstractions, truths, fallacies, desires, and fears about all of us. Why is a compilation of 24 of the search engine results.