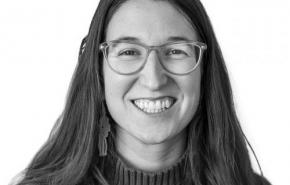 With mixed media imagery and sculptural installation, Julia brings awareness to the complexity of humanity and our communities. Attention to journalism on topics of children's education, marginalization and migration all contribute to her dynamic, collaged work. Through the use of limited color and breathable space, she invites the viewer to consider what is true in our world and of those in it. Julia is a certified educator and works with her community in Highlandtown, Baltimore.
View Julia's Resume

Baltimore Ceasefire is a powerful force for peace in our city. After the loss of a life due to violence, Ceasefire volunteers show up on the scene to “pour light and love into the space”. This body of work honors their impact in valuing every life.

As we grew up, we heard different reinforcements - positive and negative. These statements from those that raised us are unique to where we live, what we look like and who we are. This series explores the diversity of voices and the experienecs that unite and divide us.

"Crossing Borders" - A series made in Residency in Mexico City, 2019

In November and December of 2019, I traveled to Mexico City for an Artist in Residency program called Casa Lu. I departed from Baltimore City and arrived first in San Francisco. I drove south through the whole state and then flew on to Mexico City, collecting images along the way.

While in residency, I created a body of work called "Crossing Borders". The series depicts the nuance and complexity of our ever changing immigration policies at our southern border, and the impact on those that embark on long journeys.

The Little Glass Treasure House is the untold story of community, artmaking and dedication at the Children's Art Centre of Boston's South End. Charlotte Dempsey taught here for nearly 40 years. This is her story and the collective story of the children of the South End who walked through these doors. This children's literature book is 32 pages of text, written with 3rd - 5th grade reading levels in mind.

Since launching my book, I was connected with Charlotte’s living relatives: Anne and Bill Dempsey. Aunt Charlotte was a dear relative in Bill’s life until she passed 40 years ago. It turns out the Charlotte wrote a book as well. Together, we are working toward publication of Charlotte’s memoir and personal accounts from The Children’s Art Centre. This book will be a resource for educators, complete with 70 original works made by children.

The aftermath of the Arab Spring and the range of on-going conflicts in the Middle East are immensely complex. In an effort to comprehend the reasons behind continual violence, Julia dedicated time to the study of Middle Eastern journalism during 2015 - 2017.

Often the images and headlines are too difficult to look at when it comes to this nearly ten year conflict in Syria. Through this exhibit, ceramics and elements of layered collage were used to speak about the many individuals in transit who are forcibly leaving their homeland. Using flattened images and repeated shapes, visual storytelling became a vehicle for seeing the atrocities occurring in our time that we too often simplify.

This collection of work was is the earliest sighting of unframed paper collage. This practice continues into my current work today in 2021.