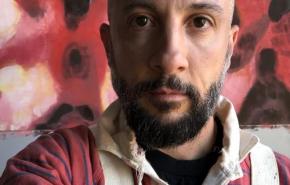 Jules Rosskam is an award-winning filmmaker, educator and interdisciplinary artist. Through the lens of autoethnography and the use of hybrid forms, his work investigates the means by which we construct individual and collective histories. He is consistently drawn to the rich discursive space of the liminal: the space between male and female, between documentary and fiction, between moving image and still. The liminal is a space in which identity dissolves and the possibility of new perspectives... more
View Jules's Resume

“When I dance, that is my true gender.”

In Dance, Dance, Evolution six trans-identified people explore their relationship to dance over time. As one participant says, “What I feel when I’m dancing is the very decomposition of myself.” This short, joyful documentary looks at the ways in which the body in motion opens up the spaces between gender, race, and time, producing pleasure in indeterminacy. This begs the question, how do we take that idealized moment on the dance floor--where nothing matters but the beat--and take it with us everywhere we go?

Paternal Rites is a first-person essay film that examines the secret underbelly of a contemporary Jewish American family as they grapple with the aftereffects of physical and sexual abuse on their present-day lives. It is also a groundbreaking film about the nature of trauma and memory itself: the ways in which trauma encrypts in uncanny ways; the function of speech and narrative in the process of decryption; and the role of film and filmmaking in the practice of healing. Paternal Rites draws inspiration from podcasts like This American Life and Radiolab and the long lineage of LGBT essay filmmakers in North America such as Jenni Olson, Marlon Riggs, and Richard Fung.

Functioning as the film’s primary conceit, in the fall of 2013 filmmaker Jules Rosskam and his partner, Alex, set out to retrace a road trip that Rosskam’s parents, Marilyn and Skip, completed in the fall of 1974—just prior to his birth and their transition to suburbia and parenthood. The viewer hears audio diaries that Marilyn and Skip kept during the course of their four-month journey and sees photographs and travelogue footage recorded on Super 8: barely perceptible, grainy, and quickly receding signs and landmarks carry the viewer along their route: Boston, Mobile, Savannah, Chicago, Portland, Vancouver.

The visual field of Paternal Rites is dominated by bright, pristine, and nearly-still images of the American landscape, which haunt the viewer with their splendor and banality, and with the layering of still images over live-action footage. Paternal Rites also utilizes the white screen, where colorful animations and beautifully rendered, hand-painted 16mm film are used to evoke the psychoanalytic process of memory’s retrieval and trauma’s repair.

Implicit throughout is the filmmaker’s queer and transgender subjectivity, which floats to the surface of the screen as the viewer is confronted with fragments of home movies of his childhood—iconic in their unremarkability—and hears audio recordings of contemporary conversations between Rosskam and Alex, who functions as Rosskam’s partner in life as well as in this project of decoding his past on screen. Together, they create a stunning visual portrait about the power of film to transform us.

Synopsis
In Something to Cry About three trans-masculine identified people watch a movie or television show that makes them cry. The result is a touching and humorous short documentary that explores the difficulty of expressing intimacy between men, the complexities of desire, and the gift of a good cry.

No Place But Between Us is an hour-long expanded cinema project developed while in residency at ISSUE Project Room in Brooklyn, New York. The piece uses projected images, dance, performance, lecture, live music and audience participation to explore cinema and the utopian. Using the works of Emmanuel Levinas, Eva Kittay, Judith Butler, Herbert Marcuse, Toni Cade Bambara, Miranda Joseph, and Lisa Cartwright, I call for a reinvestment in an ethical framework for engaging with one another, in the power of human connection to induce both our undoing and our remaking, and in the potentiality of cinematic space as utopian.

Thick Relations is a snapshot of an urban, queer community. Featuring a motley crew of compelling queer anti-heroes, this film constructs and calls forth queer accounts of time, space, and relationality which are unscripted by conventional or institutional forms of social belonging. Thick Relations is a Chosen Family affair. Director, Jules Rosskam uses recurring water images as a metaphor for the fluid promises and potentialities of queer desires and kinships, making his film a celebration of the intimacies that exist outside the normative trappings of “proper” or “mature” romances. In this way, Thick Relations exists as a kind of Anti-RomCom; it defies narrative resolution and allows for relational ambiguity. Thick Relations subverts romantic tropes and opts to trace the ways that chosen family arrangements embrace a different logic of love, alliance, and identification.

Rosskam’s film is not a place to define things, to define people, or relationships. It is an ambiguous cinematic space where every day tasks, dinner conversations, and sexual themes all run parallel in an open and unresolved fashion. Inside of this current, the film’s central characters are permitted to express love in incalculable ways. Thick Relations is a celebration of a queer counterpublic that embraces desire/pleasure as its primary, orienting ethos. In one scene, someone casually remarks, “Once I date someone, they become family.” This is the principle tenet that underscores each character’s respective journey through the film. How is chosen family built, maintained, and mourned?