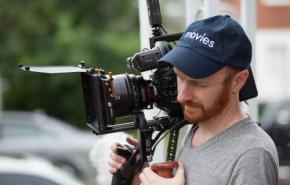 Joe Kraemer is an award winning filmmaker, artist and writer. He received his M.F.A. in Film and Media Arts from Temple University and his B.F.A. in Film from the University of Wisconsin Milwaukee’s Peck School of the Arts. His films have exhibited at film festivals and conferences both nationally and internationally. His recent film, "Just Another Day," was nominated for a regional Emmy Award, received numerous industry accolades including a Gold Telly Award, and reached over 10 million views on... more
View Joseph's Resume

Suffering from a rare eye disorder, a man convinces his estranged ex-wife to drive him back to the places from their shared past so he can see them - and her - one last time. Inspired by Ingmar Bergman's "Persona," this experimental narrative serves as a portrait of literal and metaphorical blindness, as the characters' memories of the past overlap with the fragmentary experiences of the present.

The cinematic apparatus, so often considered an objective method of documenting reality that parallels the supposedly 20/20 nature of hindsight vision, is instead presented as a metaphor for the ephemeral, biased nature of vision, a sense so often taken for granted. Multi-layered soundscapes combine with a visual aesthetic that expresses vision versus deprivation to evoke a disrupted sensory experience in the viewer akin to the fragmented perspectives and disabilities within the characters.

A study of space along the frozen shoreline of Lake Michigan during the spring thaw. Intended for gallery exhibition. Exhibitions include: Light City Baltimore, Taubman Museum at Virginia Tech University, and Tyler School of Art Gallery at Temple University.

With currently almost 10 million views on YouTube, Just Another Day explores the unthinkable: an active shooter event on a college campus. Depicting the three recommended actions to take if ever in such a situation – Avoid, Deny, Defend – this video profiles the experiences of a handful of students, professors and staff who come face to face with an active shooter attack on a college campus. Addressing what to do and how the university community will respond, this dramatization serves as an important  public service message seeking to promote increased awareness and preparedness in the community.

Shiver & You Have Weather

2012. Paper & Pencil. Shot on 16mm.
Animated adaptation of the poem by Matthea Harvey, created for Poetry Everywhere, sponsored by the Poetry Foundation and DocUWM.

It is Dr. Susan Hardy's first day on the job at her father's rustic small town family practice after taking over when a heart attack forces him into early retirement. Susan is determined to make the best of what she sees as a bad situation until her loquacious assistant, Betsy, and an unruly first patient cause everything to spiral out of control. Things only get worse when her father arrives to meddle in her affairs. This short comedic film and webseries pilot episode is a farcical and character-driven story about a young female doctor struggling to step out from her father’s shadow as she fights to take control of his dilapidated, rural family practice.

All of This is Somehow True

A sick patient enters a waiting room seeking medical help, but help never comes. A reflection on the fear and dread that defined the early days of the COVID-19 pandemic's spread.

Created in quarantine in May 2020. Filmed, performed and edited by two filmmakers from Baltimore, MD, USA. Sound design was created using freesound.org.

Ghost in the Static

A solitary security guard's mundane life is shaken when he stumbles upon what appears to be the scene of a violent crime in the forest outside the city. What he takes away with him that day will mark him for the rest of his life.

Shot in Super 16mm color negative film and incorporating a found footage aesthetic, where elements of documentary realism intrude on the narrative of the story, the film presents a gritty portrait of a solitary life in inner city Philadelphia. Ghost in the Static is a narrative short film that explores voyeurism, obsession and paranoia about the threat of violence in society.