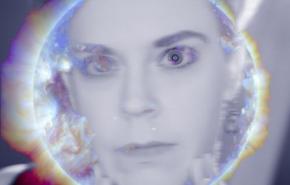 Jessica Keyes is a Baltimore-based performer and composer. Her compositions explore trickster characters, ecstatic energy, and communion with the audience. Under the name Mueo, her solo practice for saxophone and electronics explores the tensions and transportive nature of durational performance with slowly building complexity. Jessica leads an 11-piece punk brass band called Bedlam Brass and is a member of the experimental chamber group Trucker Talk. She co-organizes Mid-Atlantic Wilderness, a monthly... more
View Jessica's Resume

Patrick McMinn and I were invited to collaborate to create a composition for the Voyages event on November 17, 2022 at the National Aquarium in Baltimore. We were given the parameters that our performance would go from 7-9:30pm and would be presented on wireless "silent disco" headphones, which have three audio channels available. The Aquarium invited us to take inspiration from their programs and exhibits, and after meeting with several of their curators and educators we decided to take our inspiration from the Chesapeake Bay. I was particularly interested in oyster reefs and Patrick was interested in working with water quality data, so we decided to split the composition up such that we would each prepare a generative composition that could play live for the first two channels, and we would perform together on the third channel. Additionally, Patrick created live visuals for three projectors and I wrote a composition for a live ensemble of 10 musicians incorporating movement, music, and audience interaction.

Will the Great Water Remember is the resulting piece. It is in four movements, which we performed simultaneously.

According to Algonquian linguist Blair Rudes, “Chesapeake” likely means something like “great water.” In choosing a title, we were also inspired by the poem, “Water as a Sense of Place” by Kim Shuck, published in the anthology When the Light of the World was Subdued, our Songs Came Through. The notion of conservation as an effort in helping water and ecosystems remember what they were before we interfered is very powerful. Here’s an excerpt from the poem:

I forgot to ask the name
Of the creek that used to run through
What is now my backyard.
They piped it under,
But with enough rain
It remembers where to go.

I. “The Body is the Foundation”
I was very moved by the process of oyster reefs growing by accretion of new generations on the shells of earlier generations. I have experienced chronic illness and pain since childhood, and the idea of one body as a piece of a greater, growing whole speaks to me. A central value in my life and art is that when we make something together it is far greater than anything we could make alone, and there is great joy in this communion.

II. “A Coefficient of Memory”
Patrick encountered the phrase “a coefficient of mercy” in the book Mason & Dixon by Thomas Pynchon, and was moved by the juxtaposition of a seemingly cold mathematical term with an emotional experience. This movement creates a similar juxtaposition by associating long lists of water quality data from Baltimore’s Inner Harbor with sounds and algorithmically generating music from the relationship.

III. “What Happens After the Stochastic Event”
Ecosystems are frequently reshaped by chance events such as hurricanes, droughts, and other extreme weather. We were very moved to learn about the ecological effects of Hurricane Agnes, which ravaged Maryland 50 years ago, in 1972. The storm deposited a deep onslaught of sediment into the Chesapeake Bay and drastically lowered salinity levels, which all but wiped out many species and radically transformed the ecosystems of those that remained. Overfishing and industrial development around the Bay were factors in the dramatic outcome of the storm. Conservation efforts have helped restore health to the Bay, but it has been long, hard work.

IV. “Lateral Lines”
This playful movement is based on the behaviors of schooling fish. These fish have a physiological characteristic called a “lateral line” down the sides of their bodies, which senses via pressure changes the movements of the fish around them, allowing them to respond quickly as movement messages spread through the group.

Mid-Atlantic Wilderness is a monthly(ish) experimental music series that takes place on third Sundays at The Crown. Each month we feature a selection of improvisers grouped in various ways to present around 6 sets of delightful, strange, unexpected, and sublime sounds. We are committed to keeping the series free and inclusive, and we collect donations at the show, which we pass directly to the performers.

I co-organize and host this series with Patrick McMinn. I do the artist booking and set arranging and he runs sound and provides technical support during the show. We alternate months performing alongside the invited improvisers.

I started this series in August of 2021 because, while the world was starting to open up again after pandemic shutdowns, the High Zero Foundation and Red Room were not yet holding in-person shows of experimental music and I was eager to connect with other improvisers and play together. My goal was to create a welcoming, casual environment where we could take risks trying new things, and where young performers or musicians new to improvisation could find opportunities to get experience playing with others.

When putting together the lineup for each show, I aim to invite a diverse group of people, considering primarily their musical backgrounds and the scenes they belong to, the kinds of sounds they make, their age, gender, and race. This approach has resulted in folks who might not otherwise have met forming relationships that have led to new and exciting collaborations outside of Mid-Atlantic Wilderness, which I'm particularly proud of.

Above all, I am interested in fostering and supporting an inclusive community around improvisation, while balancing our efforts to support others in the scene who are also putting on experimental music shows. And it is a wonderful benefit that I get to enjoy regular opportunities to play music with friends, old and new.

I am the bandleader and composer for this high energy 12-piece brass band playing original music to get you up on your feet. With explosive rhythms, soaring melodies, and playful interchanges between musicians, this is the anti-marching band we would have wanted to invade the field with in high school but never got the chance to.

Bedlam Brass is part music and part performance art. We incorporate theatrical choreography and a sly sense of humor in our performances to engage with and delight our audiences. For Bedlam Brass-hosted events, I prepare bills in which bands alternate playing on stage and playing within the audience to eliminate changeover times and build the maximum energy in the room. I endeavor to book shows that represent Baltimore's diversity of musicians and musical genres, with a focus on including female-identifying and queer performers.

In my compositions for Bedlam Brass, I write parts with the personalities of the performers in mind. The music is energetic and danceable, but full of complex counterpoint and important moments for each part so the musicians have as much fun as the audience does. Through the music and performance practice, I challenge my musicians to take the written notes and turn them into an immersive experience that draws audiences in and suprises them.

On February 8, 2020, I hosted a fundraiser for recording Bedlam's first EP at Heartwood Studios. The event had a circus feel with a variety of games and opportunities for engagement, including live commentated MarioKart and Mad Libs Karaoke. The band raised $900, and went into the studio in November of 2021 (delayed by the pandemic). We released Exit Seeking Behavior on July 8, 2022, and it is available digitally and on vinyl.

Patrick McMinn and I are frequent collaborators. In Opt Out we perform durational improvisations with an ambient quality, sometimes veering into the sound world of noise. We have performed for a variety of occasions, including in the woods at dawn before a wedding, for the Bladensburg Satanic Peace Cross Ceremony, and at the new Lexington Market for Baltimore Homecoming.

I was honored to perform at the High Zero experimental music festival on September 21, 2021. I shared the stage with Jarrett Gilgore and Rupert Wondolowski.

Improvisation for Modular Synth and Puppet

I created this short video by invitation from Jeff Carey to include in his Executive Summary livestream series in March, 2021.

I co-wrote, with Thomas Ward, music for this audiobook adaptation of Mercy Athena by poet Andrea Applebee. Thomas and I traded snippets of melody and harmony remotely, building each time off what the other had sent. After several rounds, I edited the snippets together into musical interludes and underscoring and mixed them with the readings by Andrea's friends.

Mueo is my solo music project for synthesizers and woodwinds, in which I create durational music with rich and complex timbres and textures. I released my first album in November 2020, called Upbraid the Permitting Stars. I created this music during the time I was bedridden between two spine surgeries. I found that creating generative patches on my eurorack modular synthesizer provided me with a tool for deep listening as a form of pain management. I often livestreamed my patches while they were running, and developed a small following of listeners who also found the music to be soothing. I released the album as a set of hour-long tracks, which support relaxation through repetition with slow variations.

I composed, arranged, and recorded the music for this short film written by Dirk Joseph for the Baltimore Rock Opera Society Puppet 6-Pack, which premiered on January 15, 2021. In this visionary and searching sci-fi tale, an underground bunker in a post-apocalyptic future, a young scientist and a strange visitor engage in a debate that will decide the fate of the human colony. The music calls attention to the opposing forces of underground life reliant on machinery and the longed-for connection between humanity and nature through the use of acoustic instruments such as clarinet, saxophones, piano, and samples of resonant boulders recorded at Ringing Rocks Park varyingly combined with electronics and processed through eurorack synthesizer. The music gradually speeds up and intensifies as the show builds to its closing moment.

Additionally, I designed the sound for the character Geode's voice. The concept was that Geode, a semi-intelligent probe from the surface observing the people in the bunker, is a stand-in for nature and all the world on the surface. I recorded the performer with hard autotune, then copied the voice 3 times transposed to different registers and added moving filters so each comes in and out of prominence at different rates. The result is a mixture of robotic and humanistic voices that sounds otherworldly.

This Land is Not

I co-hosted a concert of new music at the Current Space with composer and bassoonist James Young on August 11, 2019. I wrote This Land is Not, an open score composition performed by the temporary low reeds ensemble, Reedswarm. We assembled and ensemble of 12 low woodwinds (baritone saxophone, tenor saxophone, bassoon, and bass clarinet) to perform alongside other temporary ensembles.

The structure of the piece was inspired by the performance practice in shape note singing, an important facet of my personal music practice, where singers may choose any part and each part is of equal importance. The opening melody is based on a bird song heard during the summer of 2019 in West Virginia and the harmonic framework draws from laments in traditional Serbian singing. The closing choral is based on the song “Arkansas” from the Sacred Harp.

Additionally, I designed the show poster.