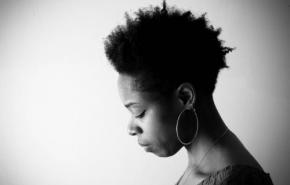 Jennifer N. Shannon (@writerjns) is a native of Cheraw, SC which is also the birthplace of famous jazz musician, Dizzy Gillespie. While she has lived in several cities both in the south and north, she has kept her southern heritage as a foundation in her writing. Jennifer has written and published three books and she has had short stories and poems published in several literary magazines such as "Deep South," "The Auburn Avenue" and an essay in "North Dakota Quarterly." ... more

"REVOLT: Black Joy Still Exists, It Always Will" is a virtual exhibition that was born out of a need to see something other than what was being shown in the media about Black people. I felt that after the murders of Ahmaud Arbery, Breonna Taylor and George Floyd, I—and everyone I knew—needed to feel energy that was joyous, happy and peaceful, so I put out a call for submissions on my social channels and within my personal networks. This led to me showcasing the poetry and photography of 13 artists from across the country on my social media channels and website.

"tender, a literary anthology and book of spells: evidence"

Three of my poems were published in the 2019 anthology, "tender, a literary anthology and book of spells: evidence." I submitted my poems back in early 2017 while living in Pittsburgh, PA. This book explores what tenderness means to Black women through various forms of art and literature. It was truly inspiring to be chosen as one of the 19 artists featured in this beautiful anthology.

I've had short stories and poems published in several literary magazines such as Deep South, The Auburn Avenue, Tuck Magazine and an essay forthcoming in North Dakota Quarterly in spring 2021. Also this year, my poem "When She Calls" will be shared in the online exhibition titled Identity from the Maryland State Arts Council.

2040 Review was a literary journal dedicated to enhancing bookshelves by showcasing authors & reviewers of color. My partner and I created 2040 Review after discovering the lack of book review journals dedicated to authors and reviewers of color. I was the creative director and she was the editorial director. The idea formed in 2017, at the Muse and the Marketplace conference, hosted in Boston by GrubStreet, where we both were attending and met during the writers of color meet up.

The publication title—2040 Review—was inspired by author David Mura. During his 2017 MUSE session, he echoed the projection that by 2040 people of color will no longer be the minority in the U.S. This projection not only influenced the publication's name, it also infused 2040 Review with an energetic mission to showcase writers of color and shift the culture of literature throughout the world.

Ultimately, I am a creative. I love to write but I also enjoy telling stories through photography and art and any other tools available. It's what I do! And I have an exciting project that I will be working on in 2021 that will take me along the east coast and involves the heavy usage of my Minolta XG-M.