Jennifer McBrien is  a thread illustrator, who uses hand and freehand machine embroidery to illustrate her thoughts of our natural and complicated world. Her process begins with ink drawings from observation and photographic resources. The rest relies on  mind ramblings, juxtapositions and compositional techniques. In her prior life as a painter, she would always begins with a wall paper pattern that she would layer onto, to hide and reveal. Currently Toile, decorative fabrics, or... more
View Jennifer's Resume

“Hanging Them Out to Dry” is about man’s influenced on climate change through everyday life activities. The embroidered birds represent a wide range of birds that are on the sliding scale of endangerment: the Piping plover to the Boat-tail grackle, the American Woodcock to the Mourning Warbler, the Brown Pelican to the Upland Sandpiper. Stitching them all from hand was done as a dedication as well as an act of preservation. The vintage napkins, as well as the clothesline, were selected for their function and history. We have traded in the health of our earth for our convenience.

This is the first work of art that exclusively features my hand embroidery. Thanks to a course at Penland School of Craft titled "Stitching as Drawing", I had been updated beyond my pre-teen experience of stitching embroidery kits on long road trips. I was amazed that I did remember most of the stitches. Now the "kit" is of my own design, with the mission of rendering living birds. I had to go back to my painting knowledge and color theory to figure out the art of blending colors with thread. Stitching is definitely a three dimensional act and a color thread stitched with or next to each other can blend and make new colors.

To photograph this piece, I took them out to New Germany State park, to find a place that I could install to bring it to life. I really have to admit there is something amazing about seeing them in this beautiful environment that truly brings them to life. I plan on adding more birds, with a kingfisher in progress , as well as find new places to install them.

"Hanging them out to Dry", was originally created for the show : "Unnatural Causes, an Exhibition about Climate Change and Biodiversity Loss" that was to be at the Charles Mansion in Baltimore, MD, for the spring of 2020. It has been postpone indefinitely due to the COVID-19 crisis. Hopefully it will happen at the Peale Center some time in the near future.

The Emergence of the Bird Women

My bird women first came as a reaction to the Alexander McQueen’s show : “Savage Beauty” , at The Metropolitan Museum of Art in the summer of 2011. Not right at first. I had to go see the show again at the Victoria and Albert in London in 2015. Still not emerging in my work. Not even in my sketches, but that duck wing dress, I could not forget. The incorporation of animal parts in his headdresses and dresses could not escape my mind. I remember my first thought , “ If I wore that I could do anything," like a super woman, a fighter.

The bird portraits that I began to draw in thread started in 2015, first as small hoop pieces. But not until 2017 , that they became my ancestors in my piece “The Genealogy of My Imaginary Family”, made up of 13 freehand machine-stitched bird portraits, ranging in sizes from 3” to 14”, canvas stretched circular hooped birds portraits resembling a genealogy tree of human personalities. My portraits evolved from shape and size, ruff to helmeted guneafowl, black thread to color.

Then 2016 happened along with the Trump administration and my world got rocked with constant news blast and mistrust of my government. Watching the rights of my fellow human beings getting stumped on while environmental protections were snuffed out! I needed strength to fight this evil power, and the bird woman emerged from that vision of Alexander McQueen. I kept seeing myself with added uniform of wings and helmet at the end of my yoga routines when I would envision my younger self staring back at me. These are the pieces that grew from this period of rage. My new characters and plants play and interact within the scenes of the toile and decor fabrics. I’ve used a variety of materials to stitch on, depending of its opaqueness and color. Fabrics range from vintage barkcloth to organic cotton to felt.

This is the most recent series that Ihave been working on since 2019. I see them growing and evolving even now that Trump is out of office, knowing very well, what he represents and what he has uncovered and brought to the light. I can see me turning myself into a bird woman in the future.

A series of images that illustrate moments during this current period of the Coronavirus. Images are transferred onto cotton then manipulated with hand embroidery. Each of these have been converted into a mask, which just seems to be the best symbol to represent COVID- 19 in America where the Mask has become as politicized and controversial to our continual divide under the Trump administration. Since I am talking about social and political current events I have used photographs from various news publications to manipulate.

Figures in thread have been a focal point for my work since my first piece “Girl with Bird” in 2014. I was doing figure drawing during an open studio session at Maryland Institute ,College of Art to keep my drawing skills up to snuff. I have always enjoyed drawing the figure and using the female figure as my vehicle of communication. It was only natural for me to challenge myself with stitching the figure on my sewing machine.

“Lost in Collaboration” is the first piece that felt like home to me. It captured the layers that I used when I painted. Having the figures and birds collaborate with the pattern background revived my painter past of painting wallpaper backgrounds as my ground, adding layers of line work with color shaping in and out with playful levels of opaqueness of paint , now translate in fabric and felt.

The two studies of woman based on Works by Richard Deibenkorn are my first works that incorporate felt into the background for color.

With the threat from the Trump administration to privatize the Postal System, I wanted to speak up on my support of one of our countries oldest and most popular systems that I have definitely relied on to do my everyday business.
In collaboration with artist, MattMuirhead, who started a campaign for the USPS by selling silkscreen mailboxes on fabrics that he would mail through our beloved system. I started to elaborate and asked Matt to silkscreen mailboxes and specific fabrics for me.

These pillows are perfect to scream or cry into as we deal with the insanity of 2020 and beyond.

"The Genealogy of My Imaginary Family"..Birdland and the Anthropocene and Beyond, 2017- 2020

In 2017, I turned my little 3” hoop bird portraits into a larger family that became my ancestors in my piece “The Genealogy of My Imaginary Family”. This piece was to fill a case that was in the Peale Museum for the “Birdland and Anthropocene” exhibit. My family tree was made up of 13 freehand machine-stitched bird portraits, ranging in sizes from 3” to 14," canvas stretched circular hooped birds portraits resembling a genealogy tree of human personalities.

I selected a variety of native birds that range from the familiar to the extirpated breeds in Maryland. I wanted them to feel like family portraits, arranged to create a narrative of subtle expressive reactions and silent dialogue. Each portrait is created freehand on the sewing machine. Drawing each mark, value and detail by manipulating the canvas under the moving needle. Each has a final result of a line drawing but with a more labor intensive method that I chose as a dedication towards their preservation.

I've continued to add more to my "family" throughout the year. My portraits evolve from shape and size, ruff to helmeted guineafowl, profiles to full body, black thread to color.

My bird portraits have become quite popular with a number of bird lovers who are now purchasing and collecting them. You can see all of my bird portraits here on my online shop.
Check out the show here for the Birdland and the Anthropocene catalogue

A series of freehand machine embroidered plants, flowers and seeds . All designs begin with watercolor and ink drawing studies from observation and researched references. I gravitate towards the edible plants commonly mistaken as weeds, such as dandelions, purslane, and thistle. I am constandly picking up seeds, leaves, twigs and dead plants on my everyday walks amd forest bathing hikes. I trace my ink drawings onto tracing paper, then trace onto canvas or cotton fabric using my light table. I then go over my lines using my long arm quilting machine where I freehand stitch by moving the fabric underneath the moving needle. I then add the felt to the piece. Then I have to redraw over the felt by following the lines stitched on the back of the piece. I've been playing with patterns and colors with the fabric choices I select.

Not for The Shooting Gallery, 2017

For the Birdland and Anthropocene show at the Peale Museum, I was given two cases at either end of the lounge room.I created “ Not for the Shooting Gallery,” for the second case. I wanted to create a diorama that included stuffed birds that were created to be somewhat of a hybrid of the stuffed animals (like the ones you win when winning a game at a carnival) with a stuffed replica. Subjects were selected by either their popularity or their un-popularity. Made of wool blend felt, recycled polyfilled stuffing and freehand machine stitched detailed and wire feet. Magpie costumes and owl masks were made and worn to the closing reception for the Birdland exhibition.

I needed a way to express my current distaste for Trump regene. I started with making catnip toys in the image of Trump, Shirtless Putin, Kelly Ann Conway, Betsy Devos, and Mitch McConell. Selling these at several craft shows throughout the East coast , I have started several conversations that have clarified that I am not alone in my feelings for this administration. I then had to add a VOODOO doll and protest banners! My husband and I have participated in many protest over the past four years. The first was the amazing women's march the day after Trump's inauguration. All works have freehand machine stitched facial features, and made of felt.

Looking through the Lines

My exploration of overlaying lines began in the early nineties. I loved how David Salle made us look through images to discover a new dialoged. I also was highly influenced by his use of juxtaposition. In these early paintings, I was doing a lot of soul searching and reaching out for my vocabulary. Borrowing most images from childhood textbooks and found imagery. I would project and play with textures, overlaying images and color. I loved painting the projected line. I found it to be quite meditative even when labor intensive. I used this technique through most of my painting career. Finding many similarities in my fiber work. Drawing the traced line, overlaying the lines over the pattern and color shapes of fabric and felt. 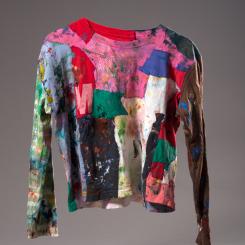 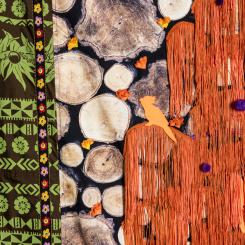 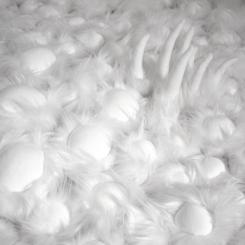 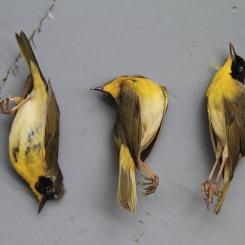 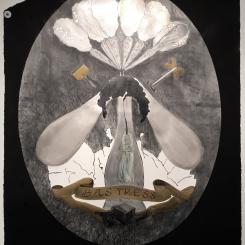 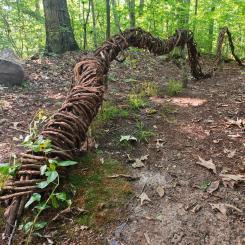 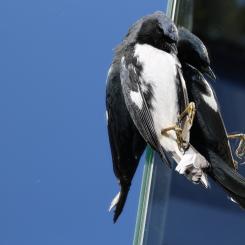 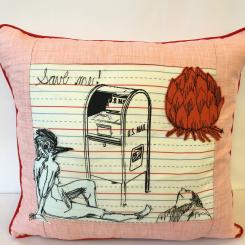