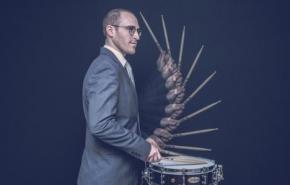 Known for performing “with precision and an impressive attention to timbral detail” (Boston Musical Intelligencer), percussionist Jeff Stern has developed a voice to listen for in today’s contemporary music scene. He has performed extensively throughout the United States, Europe, and Asia, and has collaborated with and championed the work of a number of the world’s most prominent composers. Recent premieres include Alejandro Viñao’s Stress and Flow with The Percussion Collective,... more
View Jeff's Resume

Like the mythological figure from which it draws its name, the half piano/half percussion icarus Quartet dares to fly towards the sun, aspiring to new heights of artistry. Following their Carnegie Hall debut, composer Paul Lansky simply remarked, “This is music making of the highest order.”

Winner of the 2019 Chamber Music Yellow Springs Competition and laureate of the 2017-18 American Prize, icarus has given new life to old masterpieces as well as the future of their instrumentation. What started as a graduate school project that Yale composition chair Martin Bresnick regarded as “one of the best student performances of any work I have ever heard, with great energy, sensitivity, and precision” has now toured professionally throughout the United States. Highlights include performances at the New Music Gathering, the Queens New Music Festival, Music in the Valley, the Horowitz Piano Series, and two performances at Music at St. David's in Baltimore as their 2017-18 Ensemble-in-Residence.

Their 2020-21 concert season includes performances at Princeton Sound Kitchen, Music at the Forefront, Delaware County Community College’s New Music Concert Series, the University of Cincinnati's College-Conservatory of Music, Florida State University, the University of Florida, Community Concerts at 2nd, and more. Fostering the development of new works through commissioning and collaborating with composers is at the core of the iQ mission, and this season will see the culmination of some of these endeavors with world premieres by Liliya Ugay, Natalie Dietterich, David Crowell, Douglas Knehans, and Ruby Fulton. icarus’ season activities additionally include world premieres of works by the two winners of the inaugural iQ Tests, a program that incites collaboration and furthers the careers of gifted student composers. The Quartet will further serve as the first ever ensemble to hold the Klingler Electroacoustic Residency at Bowling Green State University.

Passionate about educating and engaging with the next generation of musicians, iQ often works in school and university settings. They have given classes and coachings on chamber music, as well as composition seminars on writing for their instruments at institutions including the Peabody Conservatory, the University of Massachusetts Amherst, Bridgeport University, Yale College, and Wright State University, in addition to presentations for grade school and Pre-K students.

Larry Weng, Yevgeny Yontov, Matt Keown, and Jeff Stern are all celebrated soloists in their own rights, and together they have found a special chemistry and inimitable joy playing chamber music. They are dedicated to the discovery, creation, and performance of new music, but what distinguishes their approach to contemporary music is a strong training and background in the classical genre. icarus Quartet is committed to performing new works with a studied and convincing interpretation that mirrors the validity of works with performance practices developed over centuries.

At the pinnacle of his legendary career, performer and pedagogue Robert van Sice has assembled a stunning collection of young artists who are reinventing the concert experience. The Percussion Collective transcends the medium of percussion through uncommon performance experiences that surprise and engage audiences at a profound emotional level. The hallmarks of van Sice’s musical approach—precise execution, sonic refinement, and dynamic onstage communication—are all on display in the most vivid manner to date. Drawing from an incomparably rich bouquet of talent, The Percussion Collective flexes in size offering exquisitely curated programs for an array of venues and settings. The fabulously successful ten concert inaugural tour of the United States in the Spring of 2018 featured the first performances of the newly commissioned Seaborne, an immersive multimedia work by Emmy Award-winning composer Garth Neustadter and videographer Kjell van Sice that celebrates the beauty of our world’s oceans.

The 2018-2019 season began with the group’s first tour to China in October ‘18, featuring performances of Seaborne in the new Shanghai Symphony Hall, the stunning Jiangjsu Grand Theatre at Nanjing University, and the beautiful temple in Beijing. The tour was received with critical acclaim:

In March and in a performance presented by the Yellow Barn Music Festival, The Collective performed Martin Bresnick’s Caprichos Enfaticos at the Nasher Sculpture Garden in Dallas, Texas. This powerful work is based on Francisco Goya's etchings depicting the horrors of war. The Percussion Collective was joined by Yellow Barn's Artistic Director, Seth Knopp.

“This was truly masterful performing, and it is a lesson in getting capacity crowds to contemporary music performances.” - Theater Jones Reviews, March 2019

A performance with the Oregon Symphony and maestro Carlos Kalmar saw The Percussion Collective’s first orchestral showcase and the world premiere of Christopher Theofinidis’s Drum Circles. In this piece, four members of The Collective and the orchestra’s own percussion section surrounded the orchestra in a circle, creating a spatial and theatrical effect.

The 2019-2020 season will begin with The Collective visiting the Aspen Music Festival in August, where they will perform Drum Circles. Following performances include the Baltimore Symphony, Colorado Symphony, Curtis Symphony Orchestra, and Hartford Symphony. Residencies at The University of Nebraska, UT Austin, and the world premiere of Seaborne with Orchestra with maestro Teddy Abrams and the Louisville Orchestra. In the spring of 2020, The Percussion Collective will make its first appearance in Europe, with a tour through the Musikverein in Vienna, Concertgebouw in Amsterdam, and the Purcell Hall in London. A first recording of Seaborne that includes both the audio and visual components will also take place later in the 2020 season.

The roster of The Percussion Collective includes some of the world’s most esteemed and dynamic young voices in the art form. They are drawn from the Chamber Music Society of Lincoln Center, Camerata Pacifica, the Pittsburgh New Music Ensemble as well as faculty members from universities such as Miami’s Frost School of Music, Michigan State University, the University of Massachusetts, Vanderbilt’s Blair School of Music, and the University of Kansas. Featuring players from Europe, Asia, and the US, this new generation of virtuosi represent the leading edge of innovation in concert conception and performance.

As a percussionist specializing in contemporary music, one of my foremost responsibilities and privileges is to collaborate with composers on fostering the continuation of our repertoire. Here are some of the pieces I have helped bring into the world along with some that I look forward to performing upon their completion: