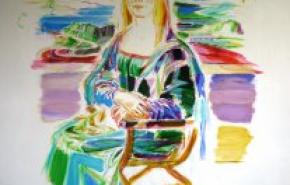 Jean E. Razulis attended the Mount Royal Graduate School at MICA on a partial scholarship, graduating with an MFA. She earned a BA in Studio Arts from the University of MD, College Park, which she attended on a full Seagram's scholarship. Jean also completed graduate-level courses in painting and printmaking at Towson University. Ms. Razulis has explored various media, currently concentrating on photography and acrylic painting to create large, colorful figurative and landscape pieces. A recurring... more
View Jean's Resume

When my daughter was 11 months old, an ER surgeon secretly and maliciously misdiagnosed my ruptured, gangrenous appendicitis as an "Anxiety Disorder." I developed excruciatingly painful, life-threatening infectious complications, including peritonitis, football-sized abdominal abscesses, a small bowel obstruction, twisting of the colon, twisting of the mesentary, adhesive disease and a giant open wound in my abdomen. I did not know if I would live, let alone paint.

After months of torturous procedures, including starvation, NG tubes and four emergency surgeries at two different hospitals, I was miraculously still alive but grotesquely disfigured, disabled, in pain and unable to paint.

My nephew suggested that I take a photo of my daughter each day. One photo led to ten. Ten to twenty. I now have more than 60,000 photos. Of my daughter. For my daughter.

And for every woman who has ever been or who will be falsely labeled with the Scarlet A of "Anxiety" instead of a real, life-threatening medical condition.

And for the poor, the old and other "worthless" patients. People who are "wasting the Court's time," as was I.

Forget everything you think you know about medical malpractice, all the hype you've seen on bus ads, on TV or at the movies. Forget the glossy hospital brochures with their "Patient's Bill of Rights." We have no patient's bill of rights in Maryland or our country.

Doctors can and do get away with malpractice all the time, thanks to our court system, which protects the powerful, wealthy medical insurance companies and their medical providers and blames the victims. Medical errors are the third-leading cause of death in our country, where killer doctors go right back out through a revolving door to abuse again.

The killer who misdiagnosed me had, a year before, butchered a Towson woman with appendicitis in an eerily similar case, yet Maryland's Court of Appeals let him go, stating that patients had "no guarantees."

Yes, the Court set him free to butcher me. To butcher me for a few hundred dollars. And he is still out there, lurking around the ERs.

Let the buyer beware. We have more rights when we buy a can of beans than with our own bodies.

I lost my body, my ability, my art. I lost my husband, who was fired for taking off too much time to care for me and then lost his mind from the stress. I lost my pets because I was too incapacitated to care for them. I lost just about everything - except my life. And my daughter. I was the fortunate one.

I could not get a single lawyer to take my case. Victims don't get big payouts; they get abused all over again by the court system. Lawyers, who take malpractice cases only on contingency, become the judge, jury and executioner. They are looking for an enormous, easy payout, not justice for the victim.

And woe are you if you decide to sue the doctor yourself - without a lawyer- as I did. You will be forced by law to pay thousands of dollars to "an expert witnesss" doctor - who was not there and who does not know you from Adam -because the courts consider ordinary citizens just too stupid to see that the giant hole in your stomach is not an anxiety disorder.

You will be put on the defense and treated like a conviving criminal. The doctor's lawyers will supeona all your medical and dental records from the beginning of time. Your abuser will smirk at you as you are deposed for eight hours straight. His lawyers will badger you with ridiculous, irrelevant and embarrassing questions; hurl insults at you; laugh at you; play good-cop-bad-cop; and accuse you of lying. The truth will not be discovered.

You will not have your pain healed, your body restored, your lost years returned, your huge financial losses repaid or your life given back. No races will be run for you. You will not be awarded a pink ribbon or applause.

But you know the truth. And so do they. Because you told them. And you will continue to tell your story until we can have justice. And our daughters' lives will be saved.

Examples of Work from Various Shows

Large, outdoor commissioned sculptures made of fiberglass, acrylic paint, canvas and other materials for Loyola College and the University of Baltimore for the "Crabtown Project."

Bust of John Waters made from carved Styrofoam, 3,00 quilting pins and acrylic paint for the "Hon Heads" show.

In October 2015, I was invited to participate in the first-ever, international Madonnari Arts Festival in Baltimore's Little Italy. For three days, I painted outside - in the rain - directly on a 10 foot by 10 foot square of the asphalt on High Street. Each day I would begin again, since the rain had washed away the work from the day before.

I created my own original piece on the street from my own acrylic sketches. I chose not to copy from a great master or grid out an existing work of art. I preferred the challenge of the live energy and experience.

In October 2016, I was thrilled to be part of the festival once again. And once again, we had rain for all three days. But the show went on.

In 2017, the Festival was moved to September. And I was out chalking again, this time in beautiful, sunny weather, appropriate for The theme of "Freedom." The wonderful people, music and food made the experience even the more fun.

In 2018, the Festival was rained out for the first time, but I kept on painting, even in the pouring rain. In 2019, for the Festival's theme of "courage," I painted a picture of my daughter at our church, courageously entering to receive her First Holy Communion.

The Movement of Change 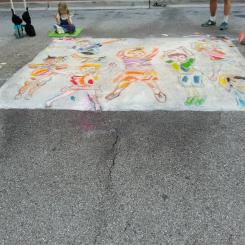