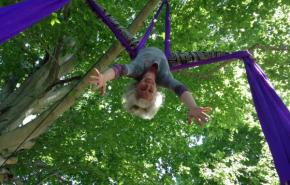 Jayne pays homage to her ancestors in the granite industry, many who died young from silicosis. My Grandfather's Hands uses spoken word, photographs, film and aerial dance to create a mixed media performance.  Ernesto Bernasconi (Jayne's great-grandfather) sculpted Ceres, a 30 foot tall Goddess of Agriculture and Fertility in the early 1900's and today this statue stands with 5 others on the facade of Union Station in Washington, D.C.  Jayne's family monument is captured in this piece as well as other granite monuments from the Hope Cemetary in Barre, VT, as well as old and current images of The Rock Of Ages granite quarries including Jayne flying on a crane over the quarries.

This is a mixed-media collaboration of aerial dance, visuals effects, and sound score that pays homage to the natural elements of Water, Air, Fire and Earth with aerial dancer/choreographer Jayne Bernasconi and visual effects artist, Lynn Tomlinson. Jayne performs the Water and Air solos, followed by Fire with  a duet with her daughter, Stacey Shapiro. The 4th section, Earth, is performed by Jayne's aerial repertory students from Towson University. The animated light-painting is collaged from sources locally and around the world including video shots by members of Lynn’s family.  Other images were taken from Jayne's recent trip to India.  Elsa Langford created an original sound score for this performance.

Below The Above honors the Divine feminine and the Ocean. It is also inspired by world-renowned marine biologist, Sylvia Earle, who holds the record for deepest walk on the bottom of the ocean. The pink silk apparatus used in this performance represents a pink plant Earl discovered as well as movement references in the beginning of the piece. Choreographed and performed by Jayne Bernasconi, visual effects by John Harris, and music by Zoe Keating.

Expanding Circumstances is a duet that uses bungie and harness. Inspiration for this choreography came from a darker phase in life, torn in two directions. Even though it's a duet, the dancers represent the same person, thus, identical costumes. The Tuvan Throat singers, Huun Huur Tu, create a haunting sound environment, expanding their voices across multiple tones. The second part of this dance uses more tradition music from the Outer Mongolia group and the movement resolves into more free flow choreography.

Dear Terry.... Sincerely, Nancy & Jayne honors our mother of Aerial Dance, Terry Sendgraff, inventer low-flying trapeze in the early 1970's. Terry was inspirational for many aerial dancers who came from a modern dance background. Terry was a strong advocate for creating unique and original aerial works that include improvisation, spontaneity, as well as choreographed structure.  Jayne's mentor and dear friend, Nancy Smith, who introduced her to aerial dance in 1995, met Terry at the 1st Aerial Dance Festival in 1999 and they both became students of Terry. They also developed a deep and lasting friendship with Terry and sent this dance to her when she was ill to raise her spirits before she passed in 2019.  "Dear Terry.... Sincerely, Nancy & Jayne is a play on words from one of Terry's original aerial dances called "Sincerely, Terry."   This dance is accompanied by a live sound score with beat boxer, Shodekeh.

Remembering Her Beauty is in memory of Jayne's sister, Jan.  Creating this dance helped Jayne with the grieving process of losing her sister to ALS/Lou Gehrig's disease. "Remembering...." was premiered at the International Aerial Dance Festival in Colorado a month prior to Jan's death and she was able to watch this dance on video before she passed away.  One of Jan's last sentiments to Jayne was to keep dancing no matter what.  The sound score in this dance has several pauses, starts and stopsto symbolize a life put on hold and cut short with a terminal illness.

Back Then & Now uses tire swings for remembering childhood memories. The performance begins with dancers entering from the back of the house moving through the audience in the dark with flashlights looking for night crawlers and other bugs.  Once onstage, they gather and remember their first aerial/flying experiences such as jumping off a roof into a swimming pool, getting dropped down a staircase, playing "measle man" tag, flying through space while learning to ride a 2 wheeler.  The dance progresses into hand games, carefree and lighthearted afternoons rowing boats in a lake and dancing to Mississippi John Hurt's "Chicken Song."

As Above So Below

As Above So Below is a performance that pays homage to the ocean.  Using aerial silks, lyra (hoops) and visual projection of underwater sea life, the choreography explores the beauty and ecosystem of the sea.  The 2nd half of the performance has darker undercurrents with rigid and abrupt movements to depict the effects of global warming. The movement incorporates both modern dance and circus arts. The ending image is of an aerial dancer diving deep into the ocean with a video of projected fish are extinct due to global warming.

For That Which Flys

For That Which Flys was inspired by the mysterious and enigmatic sound of the Ukrainian Music Group DakhaBrakha. "Listening to their music, I was captured by the haunting voices and choreography started to unfold in my head. This entire dance came together in a record breaking 5 rehearsals as I wanted to capture the energy and magic of their vocals with the soaring beauty and energy of aerial dance. " Jayne recalls.

Space Craft is an intentional design of space that is being "crafted" both on the ground and in the air with orbiting hoops.  As a choreographer,  Jayne was especially interested in blending the same shapes on the ground and in the air and to maintain the same quality from the ground to air in a seamless blend of motion. Dancers move over, under, around and in-between creating and working in negative and positive spaces with floor patterns to match the air patterns. The silver costumes were designed to give a play on words with the title of the dance and to explore the outer limits of a traditional dance.  "Space Craft" bridges the gap between ground and air, creating a dance that fills the entire proscenium stage in space. 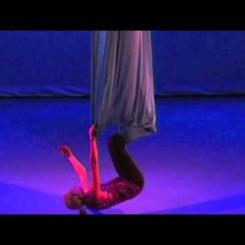 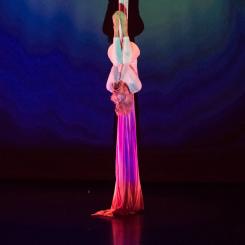