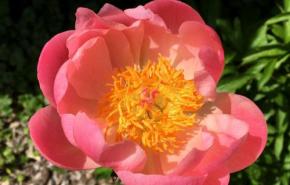 Proprietor of Circlegarden Studio, in Westerly, Rhode Island, and Professor Emeritus of Art from Loyola University Maryland, Janet Maher works in and has taught many disciplines over the decades. Her prints, drawings, bookworks, collages, assemblages, digital images, works in clay and multiple forms of mixed media have been widely exhibited and are in many private and public collections. She has also published two scholarly books. She has returned her focus to Works on Paper and Book Arts,... more
View Janet's Resume

Prayers for the Earth

One of the things I do is marble paper. Intrigued by papers that seemed imperfect for use in book arts, I saw the possibilities of drawing into the swirls to enhance the organic forms that were suggested. After drawing into the marbling, I scanned the papers and made symmetrical framing devices with them using Adobe Photoshop. After having a single sheet of each printed on archival fine art paper, I completed the images with additional hand-drawn imagery, enhancing the results with colored pencil. The three Prayers for the Earth images included here are limited edition digital prints based upon the original drawings, which I further adjusted and reduced in size before having them printed.

During the Pandemic I made collages with tiny pieces of left-over paper and shapes cut from my hand-marbled paper, composing and colorizing them with colored pencil and/or watercolor paint. I responded to each with no imposed rules, free of the need to tie them into any sequence of work, letting each take me wherever it seemed to direct me.
Simultaneous to the "Pandemic Poems" I was also doing exchange art with other artists, ultimately participating in the USPS Project. Doing the Pandemic collages led me to completely cutting up the “start” that Lori Niland Rounds sent me for the USPS Project, which resulted in my producing three additional small collages, using up every bit of the positive linework that had been in her image after cutting away all the negative space.

Early in the Pandemic, Brooklyn, NY-based artist, Christina Massey, began to collaborate with her artist friends, each sending beginnings of works to each other to complete. In addition to trying to recapture a feeling of normalcy and maintain an art community connection during a time of isolation when the world was shut down, she was also doing a form of Mail Art. This time, however, the mailed art was intended to specifically support the Postal System while the former president was actively working to sabotage the system.
I was already going to the Post Office regularly to send off the many masks I was making for specific people (by now at least 100), I am a fan of Mail Art in general,  and I was as upset as Massey was about what was happening politically, so I decided to reach out to some people, and eventually to participate in her project. It turned out to be a saving grace for me during that time, and it helped me get back to my own work (in progress). The images here include a “start” from my artist friend with the result that I completed and sent to selected shows that Massey organized.

According the the Merriam-Webster dictionary, the name of the ancient Greek earth goddess, Gaia, which came to mean earth, evolved further in 1972 to:

"the hypothesis that the living and nonliving
components of earth function as a single system
in such a way that the living component regulates
and maintains conditions (such as the temperature
of the ocean or composition of the atmosphere) so
as to be suitable for life; also: this system regarded as
a single organism."

As the planet is now fully immersed in the Anthropcene period, I choose to create abstract art images that can be interpreted at both micro and macro levels. I am responding to what captivates my waking thoughts regarding the dilemma of humans’ impact upon the earth. Within the overarching theme, Gaia, I work in several ways with toner-based mixed media images. I call my mixed media drawings "Origin" and my transfer and mixed media prints are "Specimen".  "Petrie" are small mixed media drawings that began as residue elements from "Origin" then served as the basis for larger "Specimen" works, several works in each grouping, a sample of each included here.

Metaphorical thinking regarding concealed and revealed macro/micro forms sparked open-ended questions and a new chapter in my artwork. A collaboration opportunity brought me together with Dr. Jocelyne DiRuggerio, a research biologist at Johns Hopkins. I enjoyed working with her material so much that after the exhibition I wanted to continue the series. I used digital technology initially to enlarge 1" artifacts from research papers of  DiRuggerio and her team regarding their examinations of microscopic subterranean life in the Atacama Desert, Chile. Using Adobe Photoshop to strip away value and enlarge thumbnail details I was able to alter and transform their original structures into abstract mixed media drawing/paintings. They include various combinations of gouache, watercolor, chalk pastel and charcoal, the last of this group also containing material of my own (specifically lithographic toner wash tests).  Having been immersed photographically and digitally for the last decade, it was refreshing to return to my first love, drawing, through this project.

After creating works in my ongoing Gaia series, I revisited and updated some of the Mapping the Invisible images during summer, 2018.