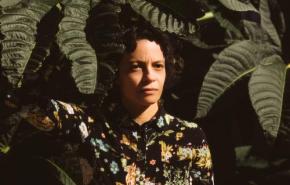 Images taken from solo exhibition for Julio Fine Art Gallery on the campus of Loyola University, Maryland and curated by Megan Rook-Koepsel in early spring 2020.  Images by Vivian Doering.

"As a daughter of an Egyptian father and Honduran mother, and having grown up in Baltimore, Milad’s cultural identity is necessarily one of many layers. It seems only appropriate, then, that her work reflect this layering. In It Means Desert, Desert, Milad reflects upon her Egyptian heritage, connecting her own multi-layered identity to the long and ever-shifting cultural heritage of Egypt herself. As Milad says, “Egypt, with its long and complex history, is a modern nation that nonetheless reveals its ancient, medieval, and colonial pasts on every street corner and in every neighborhood.” This metaphor is one that is beautifully parallel to Milad’s work. Every crevice, every corner, every layer of her work tells a piece of a fractured tale—overlapping, translucent in places, opaque in others—one that never quite comes together, and yet manages to make almost the most complete picture possible." - Curator, Megan Rook-Koepsel

Every layer shows a new choice; it’s a record of my decisions. History is a complicated thing; it is almost always told from the perspective of the dominant power. Showing the history of my hand is a way to tell my own story, my own history. I also dig back into the layers or cut and paste older works to reveal the past. My work is personal, and some of the layerings are meant to reveal and later protect or hide information. This collection of images shows how over time individual artworks take on diffrent iterations.

We assign a value to objects, and those same objects can shift meaning depending on perspective, time in history, and their given cultural context. How does a society come to these determinations, who has dominion over what is highly valued or not? As an artist, there's no doubt I make choices of what to keep precious or otherwise discard in my studio. In my current studio practice, I cut up older completed drawings, in some cases works I've held on for years, and now use for collage material to redefine their value and purpose. This sustainable process of making art is messy and most times irreverent--but an endless source of production. In these drawing-collages, I directly reference cultural symbols and language associated with my Egyptian and Honduran heritage, especially those co-opted into American pop-culture. I take creative liberties with the imagery to create a new narrative and landscape of my own.

".......The pyramid leitmotif in her recent work here feels indebted to Milad's Egyptian and Honduran background; ancient cultures in both regions erected pyramids. Visually tweaking, erasing, camouflaging, obliterating, and remixing that pyramid shape reads like the artist pointing out that living in a country/on a planet where identity—ethnic, racial, gender, etc.—is fundamental for the organizing power structure to define who you are, you can feel a little unmoored if the available boxes don't always seem like the right fit. Feeling kinda/sorta part of each parent's identity marker but not a whole anything as conventionally defined can feel like not having an identity at all. And when you're some other Other, conventional identity politics not only doesn't always know how to handle that but sometimes even wants you to choose a team. Be this or be that. Be what we think you look like. Be what we think we know about where your people came from. Be that something we assume we already know.

Science informs us that our genotypes contain the genetic information of an individual, but what's expressed as our phenotype is what people see. Biology, of course, is not destiny, and in a few of the works in "Pyramids Fall Too" Milad treats the pyramid form as a visual expression of identity that is, perhaps, no longer sufficient for communicating what it once did. In pieces such as 'They Are Pyramids,' 'Rebuilt Site,' and 'Pharonic Open' Milad's pyramid forms are beginning to be overshadowed by other elements. Gold curves suggest a feathery exterior. A pyramid's matte black face melts into a billowing cloud. Gold-line loops interlock to become stretches of gold chain. These visual developments aren't tacked extras to the pyramid forms, like adding a bathroom to a house. Milad's visual flourishes are indications of the pyramids becoming something else. And if the creation of an accurate self-identity means demolishing the historical conventions represented by the pyramids in the process, well, let them come down".