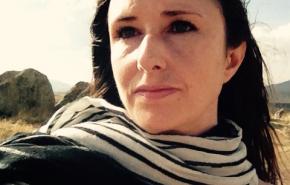 Heather Rounds received her MFA in Creative Writing from the University of Baltimore in 2007. After graduating she took a teaching job in Kurdistan, Iraq and while there briefly did some journalism for a local, English speaking newspaper. Her experiences with the paper served as the inspiration for her debut novel, There, which won Emergency Press’ 2011 International book award and was published by the Press in 2013. Her novella, She Named Him Michael, was published by Ink Press in 2017 and... more

There: an experimental novel

After graduating with my MFA I took a teaching job in Kurdistan, Iraq and while there briefly did some journalism for a local, English speaking newspaper. My experiences with the paper served as the inspiration for my debut novel, There, which won Emergency Press’ 2011 International book award and was published by the Press in 2013.

This book gets to the bone of what I seek to most get out of the writing experience:  An exploration of place, history and culture by way of the lyrical and visual, placing high value on the way words sound and look on the page, as well as the white space that surrounds them.

Synopsis: There follows a young American journalist working in the capital city of the northern Kurdish region of Iraq, a land verging on economic boom, but never far from a violent past. A cross-genre work that most closely resembles a novel, the story is at once driven and diverted by the young reporter’s struggles to negotiate her own uncertainties in a strange land— observing, participating, and retreating daily from the people and events surrounding her. Assigned reports that the newspaper bosses deem fit for an inexperienced female foreigner, she ultimately turns to writing her own story, relayed with careful attention to the intricacies of language rhythm, acoustics, and repletion. What she discovers is that her own in-betweenness is only amplified in this foreign place, that the tension between ancient customs and contemporary conflicts somehow provides a familiar backdrop for her own attempts to relate to the people back home who, confused by her choice to travel to a dangerous place, ask, why go there?”

Listen to an interview I did with Lisa Morgan on WYPR:
https://www.wypr.org/post/black-sabbath-drummer-bill-ward-heather-rounds-there-and-toy-piano-composer-david-smooke

Watch a reading I did at Yellow Sign Theater:
https://www.youtube.com/watch?v=ulE44eeKjRk

Some praise for There


“Rounds is a major new voice in Baltimore's literary scene, and There is a work of both beauty and courage.

Baynard Woods, Author of I Got a Monster: The Rise and Fall of America's Most Corrupt Police Squad

"As an American writing about time spent in the Middle East, Rounds’ voice is mercifully free of the hubris and self-pride that infects many Western travelers. This story has been skimmed of Orientalist attitudes and biases; this is a rare protagonist whose eyes have not been clouded with self-righteous assumptions and expectations."

“Rounds has passed her life onto these characters, and them onto us. Putting There around our eyes, our ability to see a girl in clothes she does not recognize, hankering after the small, vital facts that tell her story.”

“Heather Rounds manages to make entirely everyone in her novel, There, rootless and adrift, whether that be her American protagonist or the various homelanders she meets on assignment in Kurdistan. No one—and certainly not the reader—escapes from a feeling of escape, of a gnawing tumble in space. Thing is, that feeling is so perfectly pitched, so well attuned through imagination and craft, that one feels the wheel of familiarity, a presence of home in homelessness.”

“Rounds gives us her eyes and ears, jacks us up with the heightened receptivity of the traveler, and sets us down in Iraqi Kurdistan. With direct, economical prose, alive to its surroundings, she chronicles every contour of that space between wanderlust and the way a place actually turns out to be—and the way one turns out to be in it. There takes us all the way in, and on the way gives us a meditation on the poetics of self as a foreign body, on the accidental poetry of translation and strangeness, on the merry-go-round of subtle breakthroughs, approaches, and evasions; in short, the being there, and the being always destined to lose it all by going home.”

Megan McShea, author of A Mountain City of Toad Splendor

She Named Him Michael: an experimental novella

World War II has ended and on a farm in the Great Valley of Colorado, the youngest son failed to return from Normandy, leaving the mother tucked in bed with grief and a ticking in her ear. In the fields, the velvetleaf weeds are encroaching on the sugar beets and the oldest son and the wife can barely keep up with the demand of the work. Life changes in a night, when the oldest son fails to cut the head clean off the dinner chicken. When the chicken survives the blow, the wife decides to name him Michael. Soon realizing the fortune that can come from a headless, living chicken, the oldest son and wife take off for life on the road with the traveling circus’ Tent of Nature’s Mistakes. The rest is history, a strange journey in a world where tigers have three legs and elephants have no ears and chickens have no heads.

This is an experimental/cross-genre work of prose inspired by the true story of Miracle Mike the Headless Chicken—a Colorado chicken that managed to live for 18 months without a head. It’s a story about the fragility and resilience of nature and life, war, the grief associated with loss, how we might live with our dead and the unexpected ways in which one might choose to foster the life of another as a strategy for giving meaning to their own. The book was published by Ink Press in 2017 and won City Paper's Best Of for fiction that year.

The wonderful website Monkey Bicycle invited me to contribute to If My Book—a feature dedicated to authors comparing their recently released books to weird things.

This is what I said:

If She Named Him Michael were your eyes, those eyes wouldn’t get far down the night roads. Especially out of the city when met with the winding patterns or the fading broken white lines. No, it wouldn’t be age, those hapless eyes would have always been bad at night travels. No, it wouldn’t be their preference, those delicate retinas would pine to take it all in for as long as they were open to you.

If She Named Him Michael were your gallbladder it would have gotten carved out many ills and moons ago and you really wouldn’t recall that small, sludgy pouch now because, life.

If She Named Him Michael were your heart it would sometimes soar like a drone under the control of an unsupervised child. Just as susceptible to climbing over the winds as to a crash on some side street. Either way, easily broken.

If She Named Him Michael were your liver it would never forget to remind you of its vitality when it deemed it necessary. It would remain a quiet and passive gland only until you filled it up one too many times with the toxins you lean on and love and believe in so long as you can keep up the memory making.

Light There is to Find: a novel

It’s fuzzy—I was young. But the earthquake that struck Gyumri, Armenia on December 7, 1988 was on my television. I remember it, that disaster that took out 80% of the city’s infrastructure and 25,000 lives. I remember it, even though it wasn’t my disaster and it wasn’t the disaster of anyone I knew. I remember it probably because it was the first time such an event made me think directly about how mean and unfair the world can be. I think that’s why I went there in 2015 and again in 2016.

And also, I think I went because I have a preoccupation, now more than ever, with these environmental disasters. The way they come to us through media and then disappear.

But they don’t disappear, right? We—the unscathed—we just move on to look at the next one. Most of us don’t see all the ways survivors survive.

I began in Gyumri with the intention of conducting all my research there, with the help of a wonderful fixer and a couple of equally wonderful translators. In Gyumri I learned that the disaster I saw on television back in 1988 was still very much there. Decades later and thousands of people still lack permanent housing. A lot of structures—houses, churches, hotels—remain as they fell. Doing research in Gyumri turned out to be really easy, in some regards. I met a lot of resilient and spirited people. They welcomed me and volunteered their sadness and traumas.

I had no idea what I would write—especially during my first trip. I thought, perhaps, a book of lyrical vignettes, transcribed oral histories, interview excerpts, informative data, lists, indexes, and photos.  It didn’t end up like that at all.

During my second visit in 2016, despite all the beauty and spirit I found in Gyumri, I departed a little early. Perhaps because of personal things I was lugging along with me on my travels—the sadness, the intensity of the town, it kind of got to me.  So I ended up in the Armenian capital, Yerevan, and from there ended up in the semi-autonomous region of Nagorno-Karabakh.

Shortly after the publication of my book, Light There is to Find, I held an exhibition and reading at the Microfiction Row House in Baltimore. The exhibition included photographs, video and interview transcriptions from my trips.