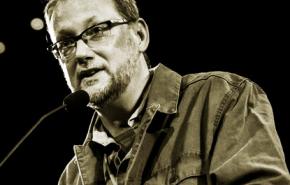 Gregg Wilhelm is a literary artist, educator, community builder, and advocate. Gregg has been Director of Mason Creative Writing at George Mason University since 2018. He oversees the undergraduate BFA in Creative Writing and graduate MFA in Creative Writing programs and serves as assistant professor, teaching the BFA Capstone and Thesis course. In 2020, he co-founded Watershed Lit: Center for Literary Engagement and Publishing Practice at Mason. Watershed Lit is a collective of organizations whose... more
View Gregg's Resume

This image depicts a selection of titles that Gregg Wilhelm has shepherded to publication as an editor, designer, production manager, marketer, and/or publisher; these are some of more than 300 book projects he has been honored to be involved with during his career in independent publishing.

A collaboration between The Light Ekphrastic journal (edited by Jenny O'Grady) and the Baltimore LED Project, visual artists paired with literary artists to create an original artwork based on a orginal poem, and in turn a new poem was written based on a new piece by the visual artist. Poet Gregg Wilhelm partnered with painter Dayna Carpenter.

Co-edited by Gerry LaFemina and Gregg Wilhelm, Clash By Night inspired by The Clash's seminal London Calling album was the first title in CityLit Press's Lo-fi Poetry series where "poets cover your record collection." Forty poets from across the United States contributed to the anthology, which found its way into the hands of the three surviving band members and other musicians, such as Alejandro Escovedo.

For a long time, lyric poetry and song lyrics have lived parallel lives, but so many poets love music and rock-and-roll. Clash by Night attempts to enter the space between those parallel lines, and engage a dialogue between other poems and the songs of London Calling. It is an artistically anachronistic book: it asked poets to “cover” songs, which led to a variety of questions (What does it mean to cover a song vis-à-vis a poem? What do these songs say today? What does the process of writing the poems discover?) that could only be answered through the making of the poems themselves.

Gregg Wilhelm's work as a literary arts administrator includes developing the popular annual CityLit Festival. This video represents some of the free events highlights over the years.

Highlights of CityLit's outreach to youth through creative writing and project management strategies.

“Geo-Poe” was a city-wide literary geo-caching adventure dreamed up and coordinated by Gregg Wilhelm in the Fall 2014.  Fifteen writers (from established authors to emerging voices) penned short short stories surrounding the mysterious death of Edgar Allan Poe or stories written in a Poe-esque style.  These stories were hidden around Baltimore in spots relevant to the narrative, and readers-seekers used mobile devices to find-and-read the story caches. Clues to each stashed cache were posted via social media.  The project took on extra life as a reading was staged at Westminster Hall, Eight Stone Press published a chapbook, and a culminating event celebrating the publication of the chapbook took place at Atomic Books.  Participants stated that the experience was a highlight of their year, and stories produced by the writers were uniformly excellent. 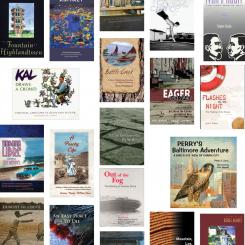