Greg McLemore is an artist and art educator. His art frequently employs the idea of Magical Realism to explore the tragic, mysterious, and comical aspects of life. It ranges from detailed urban landscapes to fantastical narratives, from watercolor still life arrangements to symbolic portraits of the Creative Class.   Greg earned an MFA (Painting and Drawing) at The University of Arizona in 2003 and a BFA (Painting and Drawing) at The University of North Carolina Asheville in 1999. He... more
View Greg's Resume

This body of work started in the Covid Lockdown of 2020. Trapped at home for days on end, my sweet escape was to go to Towson University, where I teach classes. I’d go to the drawing room and draw and paint from the still life closet. The college was like a ghost town, and the art building was virtually deserted. I held an open studio, though I rarely saw more than one or two students.  The series likely started with me doing class demos but morphed into something much more expansive. I began to pull out and assemble my favorite mannequins, and spend time thinking about these mysterious, human-like objects we use to approximate the human form. They became my strange new company. The older models wear the many scars of being hastily moved from one room to another- cracks, bruises, and discoloration decorate their limbless bodies. Both matched and miss-matched arms and legs awkwardly attach to these plastic, helpless torsos. Unseeing eyes, some remarkably penetrating, seem to hold secrets no one will ever know. Mouths that will never speak, noses that will never smell- these pitiable plastic forms allowed my imagination to take flight. Once the menagerie of props- deer antlers, bricks and bottles, human skulls, fake fruit and plants, and colorful drapery are introduced, the mysterious narrative only deepens.

This is an ongoing series of watercolor portraits describing the life and spaces of the "creative class."
So far I have worked with friends, either married or engaged, and their pets. It is important that I understand and explore my sitters personal symbolism, and include it, as much as possible, in the narrative. So far the process of seeing and developing each person's symbolic personae, and how the two sitters engage with each other and me, has been very interesting!
As an artist, it's no surprise that most of my friends are also artists, of one form or another. In some cases, I  have worked to incorporate some of what they do/ make into their painting. In others I focus more on trying to find symbols that most accurately capture their beliefs and aesthetic ideas.

This group of paintings started in Nagasaki, Japan. When my wife and I go to visit her family, I often draw in my sketchbook. Over time I have amassed several sketchbooks full of ideas.  The imagery is from parks, hospitals, temples, cathedrals, parking lots, the wharf, graveyards, shrines, museums, and other places I have visited while in this fascinating city.
I simply sit and draw what I see, for a limited time, then move to what comes next. I try and keep the sketches moving at the same speed as my perception and experience of the area.  This process helps me to experience what this city and the people here are all about. The drawings are not completely observational, as some of my other work is- but are observations combined with interpretation and imagination. While I certainly lean toward specific symbolic or iconographical material as anchors in these paintings, I take joy in incorporating aspects of the everyday as well. An example would be drawing the bust of Mary from an historic cathedral, or a statue of the Buddha, alongside of a couple of common pigeons or a woman walking her dog. In painting as in life, these things all work together to make the full human experience.

From the sketchbooks, I form the paintings you see here. I have re- drawn them much larger, on canvas, and painted them. I work fairly quickly and instinctively with the paint. The goal is to keep the immediacy and spontenaiety of the sketches, while opening and deepening their meaning through color, texture, and value.

The On the Stoop Series, made with ink wash and pen, started as a tongue in cheek exploration
of stoop culture in Baltimore. City folks of all stripes enjoy sitting out on their front steps and
watching the world go by. As the series developed, I started seeing interesting political and social
overtones evolve in the work. Some of this is about my relationship to the city, and some delves
into our specific social issues, both in the local and the international arena. I hope that a darkly
comical feeling is evoked, with references to the satirical work of the English artist, William
Hogarth among many others in the satirical, illustrative tradition.
I've made and published a book of the collected works along with a brief barrative to carry the viewer
deeper into the drawings. It's called On the Stoop; A new Exploration of City Living.
Attached is a link to the book. https://www.blurb.com/b/10284784-on-the-stoop

This group of paintings (Nagasaki, Japan) started in about 2013, and continued until about 2018. It is rooted in the architecture and people of Nagasaki, Japan. I realize that Nagasaki is most well known to the US as one of the two cities on which atomic bombs were dropped. I am purposefully choosing to show other aspects of the city. Having a wife from Nagasaki, and spending significant time there myself, I know that the city is much more than this horrible episode. I hope to describe the unique texture of the city. Despite the bombing, it is well known in Japan as a historically rich city. Some of these paintings are about me understanding the city and my little place in it. They are densely layered paintings, and in person, very luminous.
Though Japan certainly has the historic architecture it is so well known for, it also has some blocky, concrete architecture of the 60s and 70s as well as plenty of Art Deco. This more common architecture is what sets the stage for the Magical Realism I paint. As the series progresses, I am increasing the amount of odd, slightly unlikely events occurring within the narratives. Animals and figures are becoming a more important part of the work, though they still inhabit and are informed by the surrounding architecture.

The next group, The Mysteries of Baltimore, was made around the same time, and shares stylistic similarities.
I was working with Baltimore's architecture, people, and animals, to develop stories with allegorical overtones. They are based around people's ability to find beauty and wonder among be-devilingly difficult circumstances. In Mysteries of Baltimore IV (Unexpected Windfall), a hungry fox unexpectedly comes upon a group of chickens. The fox has come upon an unexpected windfall, a winning lottery ticket. A dream countless people in Baltimore share. Somehow, good luck will come their way, and deliver them from their dire situation. In Mysteries of Baltimore II, Young Zonnen finds beauty (the Easter Bunny and a golden egg) among the ruins of the city. Again, an example of hope and aspiration in the midst of despair and decay. Most of these Mysteries contain some sort of moral or ambition, though this kind of aspirational thinking might more easily fit in a dream, nightmare, or dystopian future.

The Baltimore Ruins paintings are highly detailed paintings of the city's crumbling and in some cases, razed, structures.  I aspire to reflect the deep, dark, gritty nature of the city, as is reflected in its architecture. Inferences to the human psyche are enmeshed in each gash, hole, and sloppy patch.
The painitngs are not meant to be seen as criticism or praise for the city, as much as observation and exploration of where  l lived for the last 17 years.
In the most recent paintings of this series, such as "A War of Words" and "Mixed Messages" I am working substantially with how the classical structure of buildings is at odds with the graffitti and tags that are all over it. I also enjoy the trying to understand the range of mixed messages between road signs, store fronts, and graphitti.
This series started around 2011, and ended in 2018.

This group of paintings is a collection of work that floats between conscious and unconscious thoughts and urges.  They are meant to investigate ideas of personal transformation, identity,  subversive behavior, and the individual’s place in society.
While this work may nod toward illustration and fantasy, it is also very much influenced by Renaissance and Mannerist painting. Some of the images combine elements of Western religious iconography with symbols and figures from Japan. This combination of cultures and symbols is, in many ways, a description of my current life. In broader language, the mixture of icons is a reaction to the direction of our more globalized world. 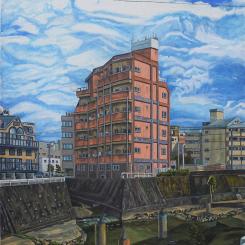 Sketchbooks, From the Water's Edge, Near the Hospital 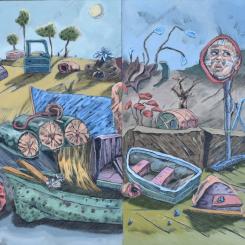