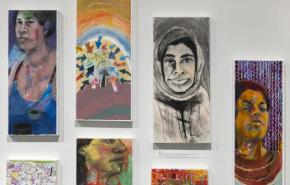 Gina Pierleoni uses portraiture to spark conversations about empathy and our common humanity.  Portraiture is the opposite of assumption.  Pierleoni’s images are acts of deep seeing that push past label and judgments; they seek to "de-separate" us.  In every series, Pierleoni assembles pieces to create a larger whole. Portraits of real people placed together become a community or congregation. Older, paintings are fitted in new ways to make large Human Icons that record a transformative... more
View Gina's Resume

My mixed media paintings are created over weeks, months and years, each lovingly realized.  I start with a model, paying close attention to impressions and our conversations.  Both form the heart of the piece.  After our time together, I continue alone recalling as much as possible about the sitter and our time together.  The remainder of what happens is intuited.  I draw, paint, scratch into, collage. Hand-made stencils and stamps create additional layers. Gender, race and age sometimes blur.  Figures emerge from long histories of surfaces and ghosted images.  These are real people, alive, changing, vulnerable and genuine.

During the last half of 2019, it was clear my husband was  sick.  His diagnosis came in August and in less than 6 months, he passed.  A couple of weeks later, everything shut down with COVID.
The more things devolved in life, the more I turned to birds for solace.  I watched for them, listened to their conversations and trusted that no matter what happened, nests would continue to be made, baby birds would continue to be born and later fledge.
The less I understood about where people go after their bodies die, the more credence I gave to the birds as intermediaries between worlds, as though they didn't  recognize a dividing line.  Birds continue to find a place in my paintings.

What Makes Us (Us)

Gina Pierleoni: What Makes Us (Us)
Installation at Creative Alliance, Baltimore, MD

Exhibition Statement
Everyone deserves to be seen and heard.

Over the past 26 years, I created nearly 300 portraits of people across the spectrum of familiarity. These images push past labels and judgements as they question perception, habit, and bias in how we place ourselves in relation to others. What Makes Us (Us) is the first time nearly the entire series has been displayed in one place.

In the late 1970s and early 1980s, I frequently sketched commuters and the homeless population inside Grand Central Station in New York.  Sometimes I would have a conversation that resulted in the person asking to have their portrait drawn. The volunteers were almost exclusively homeless. I offered the drawing as a thank you for our time together. The more I showed up, the more people would ask me to draw them. The deeper the connection, the closer the image resembled the sitter.

During the same years, I bartended at a train station lounge. Some of the regulars were Vietnam veterans, who shared their struggles to reintegrate. Their compassion for one another regardless of rank was touching. Drawing portraits of them created conversations. I noticed parallel shame and invisibility among the homeless and veterans.

Sketching became a form of advocacy. I didn’t imagine these drawings would one day provide a gateway to my own healing, form the central philosophy for my teaching and community building, and build a platform for the art I cared about making.

When the series began, I made several drawings of my voice.  The first portraits, emotionally raw unearthings, used mostly charcoal lines. The process was physical, empowering.  Each year I added more portraits.  The pieces were reworked over months, years until the images came alive. Using a similar scale created an absence of hierarchy.

I use portraiture to spark conversations about empathy and our common humanity.  Portrait painting demands curiosity, stillness and deep observation. My portraits are multi-layered: drawn, painted, scratched into, stamped and stenciled under, over and through the surfaces. I am painting from the inside out to convey the emotional fabric of someone, in addition to how they look. These are real people, alive, changing, genuine and vulnerable.”

Human Icons
These paintings honor and make visible moments of transformation within the people they depict.
Most are made of multiple panels from old paintings, reconfigured and reworked. Joining  pieces in new ways mirrors how we continually upgrade versions of ourselves.  Some 'older' areas remain visible in their entirety, other areas are largely obscured. The figures emerge from a long, multi-layered history.

My grandmother, mother and aunts recited daily rosaries into their 80’s and 90’s.  Their hands worked a well-worn path from the crucifix to the first few beads, around the loop and back. They prayed, paced and rocked.  They prayed while vacuuming, making sauce, changing diapers. Prayers, were in their DNA.

The sewn figures parallel my painting and mixed media processes.  Stitching is drawing, fabric is paint and attached objects create layers. Through collecting, sorting  and valuing, materials headed for the landfill are sewn together to make something whole again.

Each figure is made entirely from discarded and re-purposed materials except for thread and paint. Materials have included: electric toothbrush rings, gift bag handles, any small things with holes in them, shoelaces, broken costume jewelry, hospital socks, old beads and buttons, rosaries and medals of saints, graduation tassels, sequins, leather scraps, fabric and yarn. Everything is sewn together with a simple looping stitch.

My mother, a healthy and active 86 year-old, developed an infection which traveled to her brain. Overninght, she was completely transformed, bed ridden and frail. Initially, she was only able to say a handful of phrases which, strung together, seemed meaningless: “You know”, "Wow”, and “I was thinking “.  Every once in a while she had moments of startling clarity.

In the next few months, she rebounded and  learned to walk with a walker. Her ability to speak returned but her memory was dramatically impacted. She asked questions like, “Was I a good mother?” and “Was I a good wife?”   She didn't remember all of her 9 children unless she named them from oldest to youngest. My parents had been married for over 50 years but she'd misplaced her memories of  him.  It was as if the files in her brain had been randomly ransacked and areas were deleted or mismatched.

In many ways, she was more content because she didn't remember what troubled her in the past. My mother became funnier, even to herself, asking questions like, “What do you call the thing with two holes?”  I replied, “Pants?” She called her walker a wagon and most of the time was OK with her mix-ups. It was game we played of remembering and sometimes I got the answers right.

These drawings reflect the space between my mother's mind before and after, memory and forgetting, the frustration of losing something you can’t find again, and the playful moments that sometimes happen when loss is treated like an adventure.

Wearable: Painting Rag Shirts
In the process of making paintings, I clean my brushes and stencils on rags made from old cut up T-shirts.  The combination of colors and patterns that appear on the scraps is not replicated in any of the rags.  Though I didn't realize it would be, sewing the shirts back together is very much like making a painting.  It is a balancing act, a push and pull, and eventually, after days, weeks, months, it's done.  The difference is I can wear these paintings.

The Backstory: I’ve saved these painting rags for 35 years. I couldn't part with them because the colors on the T-shirt scraps were remnants of the paintings I'd created.  They sat around for decades accumulating.  I started sorting the fabric into short and long sleeves, bottom edges, necklines and middle sections. It seemed natural to sew pieces back together. The process became a way to reference the figure and my personal history as a painter. My palette has changed many times over the years. This ongoing series transforms the rags back into paintings.

Statues for My Father

After my father died, my mother handed me a stack of his funeral cards and said, "Why don't you make something from these?"  The cards honor his name (Gino Pierleoni, so close to mine), birth/death dates and the images and religious practice that was important to him.  I wondered whether there would be a point during the alteration process when these religious figures might no longer be considered "holy".

The final pieces are mounted on wood, freestanding like statues.

Visible Man Revealed is a series based on the clear plastic Visible Man models common in my childhood. Rather than showcase the organs, I wanted the interior spaces to be a cataloging system or series of thematic collections. In these black and white ink drawings I used common male archetypes collecting images and text to describe each one.