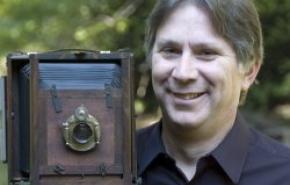 The images I create are meant to provide a jumping-off point for the viewer, allowing them to see what they wish to see, or create a story of their own making. The ethereal nature of the images offers a chance for one to fill in the gaps with objects of their own creation, allowing for a somewhat shared experience. I primarily work with the Bromoil process, one which has few practitioners these days, because it best conveys my intent.
View George's Resume

At one time Braddock was a city of over 20,000 people, but the collapse of the steel industry and infusion of crack cocaine reduced it to a little over 2,000 inhabitants. However, this is not a place that has given up. A strong mayor and the determination of the people are starting to pay off, though there is a very long road ahead.

The Braddock Project - Part 1 is the beginning of a project where I visit the city twice a year over the next decade to document the resurgence. This is a baseline that will tell us where it has been. Indeed, a number of these places no longer exist, as the city works its way back.

Each print was created through the Bromoil process, a labor intensive, time consuming procedure where the silver is removed from a traditionally created darkroom print and replaced with lithographic ink by striking its surface with a stiff, ink charged brush. It adds an ethereal atmosphere to the scene, allowing the viewer to enter and understand the image on their own.

The Extras refers to those individuals who play such roles in the movie of my life. I have no interaction with them, I do not hear their conversations, they remain in the background. However, their lack of presence would be disquieting, and I need them to help complete my story. Although they remain at a distance, each extra has their own successes and failures, worries about the future and care for loved ones, and a life as complete as my own. Just as they are extras in the movie of my life, I serve the same purpose for them..

Each print is created through the Bromoil process, a labor intensive, time consuming procedure where the silver is removed from a traditionally made darkroom print, and replaced with lithographic ink by striking its surface with a stiff, ink charged brush. Although this process is seldom used to make images of this nature, it adds an ethereal atmosphere to the scene, which allows the viewer to enter and understand the image on their own.