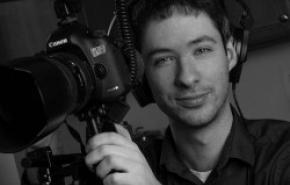 Gabe Dinsmoor is a multimedia journalist and documentary filmmaker living in Baltimore, Maryland. Dinsmoor has been published by HBO, Netflix, The Guardian, The New York Times, NPR, and Vice News Tonight, among other outlets.  Currently, Dinsmoor is a freelance cinematographer working on documentary projects in Baltimore City.
View Gabe's Resume

Director and Cinematographer Gabe Dinsmoor is a dedicated Baltimore storyteller. As a freelance video journalist, he captured the 2015 Baltimore Uprising along with other protests against police brutality. This led him to working as a cinematographer and Associate Producer on Baltimore Rising (2017 HBO). Dinsmoor is committed to telling stories around social justice and making a difference locally by showing Baltimore through a different lens than is portrayed by the media.

“This short gives background into how this movement started and shows how it’s became a source of respite from the violence for all of its participants. We see Bridgeford sharing her soul with her city and utilizing the healing energy of public grief and community mediation.”

The clear crowd favorite, however, was Gabe Dinsmoor’s “Sage,” a visit with the indomitable Erricka Bridgeford, organizer of the Ceasefire movement. Over and over again in the 20-minute film, Bridgeford pleads with whoever will listen to take pride in their city, as if her force of will alone could keep Baltimoreans from killing one another in record numbers. When the film finished, the packed Parkway audience broke into loud and sustained applause.

-By Chris Kaltenbach, The Baltimore Sun

Little League baseball in America's most dangerous city is more than just a game.

In Camden, NJ, America's poorest and most dangerous city, the crack of a bat and the laughter of children for a moment replace the sounds of gunfire and the call of drug dealers. On a set of corridors nicknamed Heroin Highway, the young men and women of the North Camden Little League navigate the hazards of the drug trade to come to and from the sandlot at Pyne Poynt Park. The league plays a vital role in creating change in the struggling community of North Camden by bringing families, coaches, and children of all ages together.

PYNE POYNT is a character-driven film that follows the life and death of players and coaches on one small, urban oasis where the chances of success aren't good, but where the phrase 'hitting it out of the park' takes on a whole new meaning.

In the wake of Freddie Gray's death in police custody, peaceful protests and destructive riots erupted as the city awaited the fate of six police officers involved in the incident. Baltimore Rising follows activists, police officers, community leaders and gang affiliates, who struggle to hold Baltimore together.

The city evicted dozens of local artists from this Station North community space due to "unsafe" living conditions. Published in Baltimore Magazine.

Camden, New Jersey has a murder rate 12 times the national average and is both the poorest and the most dangerous city in America.

Local police are now using state-of-the-art surveillance equipment to track and monitor criminals so they can anticipate their next move. The military-grade apparatus uses cameras, microphones and listening posts at a cost of $4.5m.

Multimedia journalists Gabe Dinsmoor and Tanya García produced this video of a February 12, 2017 Baltimore protest against the recent wave of ICE raids by the Trump administration. Published by Latino Rebels.