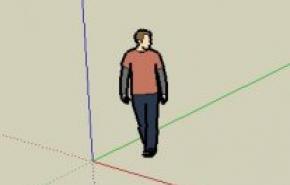 Fred Scharmen graduated with a BS in Architecture from the University of Maryland in 2001 and a Masters Degree in Architecture from Yale University in 2006. Fred is a cofounder and principal of the Working Group on Adaptive Systems, an art, research, and design consultancy. As a board member of D center Baltimore, Fred was active for over four years helping to organize the Baltimore Design Conversations, an open forum for thinking about art and design in Baltimore and beyond. In addition to... more
View Fred's Resume

Space Settlements is a book project authored by me, looking back on NASA's 1975 plan to build huge cities in space for thousands of people. Space Settlements discusses NASA's proposals within the cultural and design contexts of the 1970s. This project was an act of speculative futurism, but it also registers in the realms of art, architecture, urban design, and the popular cultural imagination, and has a lasting implications and influence today. Space Settlements is published by Columbia University's Columbia Books on Architecture and the City imprint. This book is supported by a generous grant from the Graham Foundation for Advanced Studies in the Fine Arts.

The Nonhuman Autonomous Space Agency is an open world speculative research project that proposes a network of robotic and biological systems for exploring the solar system, tied together by exchanges in the material and online attention economies. In recent decades, space exploration has been the heroic imperative of humankind, but this was not always the case. The first Earthlings in space were dogs, monkeys, and rabbits. Offering the opportunity to explore space back to nonhumans reveals new opportunities, risks, and rewards. Would an animal already adapted for life in a weightless medium not be better suited for free fall? What would an intelligent, curious, nonhuman mammal with a twitter account want to see and do in high Earth orbit and beyond? Using robotics and fabrication to create new spatial systems with new affordances for their inhabitants, the Nonhuman Autonomous Space Agency imagines that the future of space exploration and inhabitation might be an adventure for everyone.

This project has been exhibited in a solo show at pinkcomma in Boston, and at Artscape and School 33 in Baltimore.

Pillow Fort Semper was created for the Baltimore Museum of Art in 2016, as an interactive event activity and temporary exhibit in the East Lobby. This project was designed and produced in collaboration with Marian April Glebes.

Since the dawn of time, humans have been rearranging their stuff. Stonehenge, Easter Island, the Great Pyramids, can all be seen as the results of people deciding to move their things around. As soon as couch cushions, chairs, and blankets were available, someone was probably combining these pieces in ways that they were never intended to be combined. People (of all ages) use furniture and fabric to make forts within their homes for a lot of reasons, but most of these boil down to a need find some temporary refuge from everyday life. If the home is a shelter, then the pillow fort is a shelter within the shelter, an interior within the interior. The pillow fort is defensible space, but it is not made of hard warlike materials. Instead it is soft, the comfortable, inviting ordinary stuff of the home is rearranged into new configurations to make new kinds of space. The pillow fort has a whimsical legibility, it reads as both the castle and the couch at the same time, and it invites us to engage with it, to use it, and to remake it. This making and remaking is extra fun with company. Just like in full size home-building (or Stonehenge building), the creation of the pillow fort needs extra hands present, if only to balance the couch cushions while the blanket is draped over the top.

Evergreen Commons was a site specific installation for Sculpture at Evergreen 6: Simultaneous Presence. Designed and built in collaboration with Eric Leshinsky and Ryan Patterson, this was an exercise in urban public placemaking, with work contributed by several Baltimore artists: Gary Kachadourian, Michael Benevento, Lee Freeman, Sarah Doherty, Jonathan Taube, Billy Mode and Services United. This new public space was placed in a dialogue with an existing historic garden opposite, with the grounds of the 19th century estate within which it was situated, and, ultimately, with the city at large.

In the summer of 2010, the artists held regular public events here, with games, music, and food. This project was awarded 'Best Site Specific Work' in the Baltimore City Paper's 2010 annual Best of Baltimore issue.

For more info, see the project website at: http://friendsofevergreencommons.com/

These drawings explore continuous curvature based on a few simple rules about line length, line connections, and degree of change. In each case, a system is developed, and then pushed to its limits or crashed.

The hypothesis that love stories are stories of form: Installation

This large (14' x 5') wall drawing traces the smooth transition between three regular 2D tiling systems: hexagonal, square, and cairo. These grids are disturbed to form figural disruptions based on geometry from the traces of previous work hung on the gallery wall.

Writing and research is a vital and active part of design practice, and design teaching. This collection of writing addresses diverse audiences - those interested in popular culture, cities, and design - in academia, in professional disciplines, and in the general public. The topics of this research and criticism center around the intersection of architecture, science fiction, politics, and public space (especially in Baltimore).

A key aspect of this work is spatial practice. Work in other disciplines - research writing, visual art, installation, architecture - feeds into this. This practice is centered around the creation of images that evoke new realities, to help build consensus among collaborative team members, and to aid in creating public audiences.