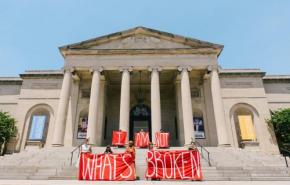 FORCE, the recipient of the 2016 Sondheim Prize, was founded in 2010 by and for survivors as an art and activist collective dedicated to constructing a culture of consent. FORCE is an intersectional, LGBTQ focused, multicultural, pro-black and anti-white supremacist collective, who has done our deepest organizing work in Baltimore and Mexico City, and has planted seeds globally. With a focus on local organizing in our home bases, we strive for our visual imagery, language, resources, and organizing... more

Inspired by the AIDS Quilt, from 2013-2019, FORCE collaborated with survivors of rape and abuse from across the country to tell a collective story. The Monument Quilt is a collection of over 3,000 stories from survivors of rape and abuse. Written, stitched, and painted onto red fabric, our stories are displayed in city and town centers to create and demand public space to heal. The quilt resists the popular and narrow narrative of how sexual violence occurs by telling many stories, not one. The quilt builds a new culture where survivors are publicly supported, rather than publicly shamed.

The 50th and final display of the Monument Quilt was May 31-June 2, 2019. The 3,000 collected squares were displayed an additional 49 times in 35 different cities across the US and in Mexico (read more on CNN and MSNBC).

“PINK loves CONSENT” was a web-based prank that made consent go viral and sparked an internet revolution. FORCE pretended to be Victoria’s Secret promoting a new line of consent-themed, anti-rape panties. The action and internet aftermath got millions of people talking about consent, rape culture, and the sexual empowerment of women.

This project was a collaboration with web developer Dan Staples. The models pictured are Brittney-Elizabeth Williams and Alexa Richardson.

In September 2013, FORCE tricked the internet into thinking that Playboy had re-invented its annual party school list in response to the predominance of rape on college campuses. The new “2013 Top Ten Party Commandments” chose to focus on consent, boldly stating, “A good college party is all about everyone having a good time. Consent is all about everyone having a good time. Rape is only a good time if you’re a rapist. And f- those people.” Slate, NY Magazine, Salon and others reported that the party commandments were an elaborate hoax to promote consent. The fake list featured 10 groups of college students from across the country doing smart and creative things to educate their peers about consent and make the practice of consent a mainstream, accepted idea.

As a follow up to the online spoof, FORCE hosted a contest encouraging students to share ideas about how they are creating consent culture on their campus.  The contest was accompanied by the FORCE's own magazine, Consent: A Good Time for Everyone, including actions and activities for students to use to promote consent on campus. The Consent zine was designed by Whitney Frazier. The spoof was a collaboration with web developer Dan Staples.

On the eve of the last presidential debate, FORCE projected “RAPE IS RAPE” onto the US Capitol Building along with stories of survivors. The text tells the experience of survivors, which in a national conversation about the politics of rape, have eerily been left out. The project was a collaboration with the art/activist collective Luminous Intervention.

This project was a collaboration between feminist team FORCE: Upsetting Rape Culture and the activist collective Luminous Intervention. The project was conceptualized by Hannah Brancato and Rebecca Nagle. Photos are courtesy of Casey McKeel.

On Feb 14, 2013, FORCE: Upsetting Rape Culture floated 44 giant Styrofoam letters in the reflecting pool to spell, “I CAN’T FORGET WHAT HAPPENED BUT NO ONE ELSE REMEMBERS”. The poem, written by a survivor, highlights the isolating and silencing experience of rape in the United States. The poem was a demonstration for The Monument Project: a call to create a permanent memorial to survivors of rape and abuse.

This performance was part of FORCE's installation for the Sondheim Artscape Prize 2016 at the Baltimore Museum of Art. The performance was collaboratively organized with Melani N. Douglass. Photography by Tara Sloane.

In 2016, FORCE organized Not Alone Baltimore, a month-long campaign, where messages of support for survivors blanketed Baltimore on buses and billboards. A series of program where survivors shared their stories and discussed solutions to the challenges Baltimore faces in adequately serving survivor accompanied the visual component of the campaign. Not Alone Baltimore concluded when the Monument Quilt closed down 2 blocks of North Avenue for a day-long healing event.

FORCE creates public actions in solidarity with interconnected issues. This has included work to advocate for Tribal Sovereignty and build healing spaces for Native communities. This series includes a works created to bring visibility to the Dakota Access Pipeline and its connections to these higher rates of sexual violence for Native Women. FORCE also collaborated with other organizers to bring visibility to the Dollar General case. Despite the fact that its store supervisor sexually assaulted a 13-year-old, Dollar General was fighting the survivor’s family and the survivor’s tribe to avoid paying any penalty for the molestation of a minor interning at their store. If ruled in Dollar General’s favor, this case would severely limit all American Indian Nations’ ability to protect their citizens from crimes like the sexual assault this young person experienced. In coordination with fellow Native American activists, FORCE created a fake “coupon saver” to bring attention to the above-mentioned Dollar General Supreme Court case.

We do this work through social media campaigns, direct actions and quilting workshops. 4 in 5 Native women will be raped, abused or stalked in their lifetime and 1 in 3 Native Women will be raped, abused or stalked every year. 96% of these perpetrators are Non-Native. Because of a racist legal framework imposed by the United States government, Native Nations are prohibited from prosecuting Non-Native people who commit sexual assault, rape, child abuse, or murder on their lands. FORCE’s tribal sovereignty projects took place in partnership with community and national Native organizations, including National Indigenous Women’s Resource Center, Native Alliance Against Violence, Muscogee (Creek) Nation Family Violence Prevention Program, and many other Tribal programs, coalitions and grassroots advocates.

On the eve of the presidential inauguration in 2017, survivors of rape and abuse projected building-sized statements of how Trump reminds them of their abusers in Oakland, California and Washington DC. The projections were stills from a video by DISCLOSE, an Oakland-based art-activism collective.

As Trump supporters and protesters poured into the nation’s capitol for inauguration weekend, the front facade of the Washington DC Convention Center was lit up with statements like “In this man’s words I feel the anger of the man who pinned me to the floor when I was 14”. The next night, the convention center hosted an inaugural ball, celebrating Trump’s presidency. In Oakland, California, DISCLOSE organized survivors and allies to march to the Oakland Police Department headquarters, where they projected the video upon the building’s front facade. The Oakland action was in protest of the inauguration of a “Rapist in Chief”, and to the repeated sexual exploitation, coercion and intimidation of sex worker Celeste Guap, whose story made national news in 2016.

“The members of the OPD who exploited Guap, like Trump, are examples of the endemic perpetuation of gender-based power and sexual harm, resulting in the continued oppression of all women, especially women of color and trans women,” said Jadelynn Stahl, from DISCLOSE.

In the video, titled “We Will Not Be Silent”,  survivors name the parallels between the violence of the Trump presidency and the violence they’ve experienced in their own lives. The video concludes with a commitment to survivor-led organizing and resistance. The video was created by DISCLOSE, and includes the voices of several survivors of gender-based violence. It was projected by Luminous Interventions in collaboration with FORCE: Upsetting Rape Culture in DC, and was projected by the San Francisco Projection Department in collaboration with DISCLOSE in Oakland.

“Survivors of rape and abuse, along with our supporters, are coming together to use our collective voice to name what is happening: a rapist is becoming president,” says Jadelynn Stahl from Oakland-based group DISCLOSE. “Not only has Trump bragged about sexual assault in his personal life, but through his public actions, rhetoric and policies, he - and the administration he has appointed- embody the racist, misogynist, xenophobic, classist, ableist, transphobic, and homophobic agenda that is the bedrock of rape culture in the US. We, as survivors of gender-based violence, came together to assert that our collective vision for a world without gender-based violence persists in the face of the impending administration. ”

“As survivors of violence, we know best the tactics that Trump uses to maintain power because we have lived it,” says Rebecca Nagle FORCE Co-Director. “We have been violated, we have been lied to, we have been gaslit. Trump is not new, but all too familiar. As a survivor and as a queer, Native woman I know deeply the hate that Trump embodies, because I live it everyday.”

The full video was released online as part of a #WeWillNotBeSilent Twitter storm coinciding with Trump’s swearing in ceremony. From noon to 1pm EST on Friday January 20th, survivors will be stating the ways Trump reminds them of their abusers using the hashtag #InThisMan. Survivors will also be naming how they plan to organize against and resist Trump with the hashtag #WeWillNotBeSilent. The Twitter storm is co-sponsored by Disclose, Force: Upsetting rape culture, Sister Song and North Carolina Coalition Against Sexual Assault. A Storify from the event is available here.

DISCLOSE is a Bay Area, art-based, collectivist organization founded in the Spring of 2013 to address the pervasive issue of sexual violence. Project-based, they collaborate with artists, organizers and educators on events which aim to actively consult with and engage their diverse communities through outreach, education and direct action in order to facilitate dialogues that address the complex oppressive systems that allow sexual violence culture to thrive. We center the voices of POC, trans and gender-nonconforming folks and all Women.

When Betsey Devos was invited to speak at University of Baltimore’s graduation, FORCE organized a series of actions to show our resistance, including a google hangout conversation on what it would mean to create a new tradition of belief in America, a protest at the graduation, and a series of graphics about belief. FORCE joined with awQward, GLSEN Maryland, JHU Sexual Assault Resource Unit, End Rape On Campus, and the Marsha P Johnson Institute to host the online conversation and with GLSEN Maryland for the protest.

45’s administration’s continues to attack survivors - at home, abroad and on campus. 45 revoked the visas of nearly 60,000 Haitian immigrants. Roy Moore nearly won a Senate seat in Alabama - a man who dreams of an America where Black people were enslaved - and has had nine women allege assault against him. DeVos has raised the burden of proof for survivors on campus, making it harder for college students who experience sexual violence to seek justice. The lesson we as survivors learn again and again, is that rape is an American institution, and that speaking out harms us, and makes us more vulnerable within a toxic culture that seeks to punish survivors for asking to be believed. While belief is a luxury for any survivor, we know that for survivors of color, queer and trans folks, folks with disabilities, immigrants and/or undocumented people, youth and Muslim communities, belief in our histories -- the things that have happened to our bodies -- becomes nearly impossible. We believe it doesn’t have to be this way.