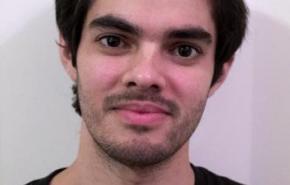 Eric Rivera Barbeito was born in San Juan, Puerto Rico and received his BFA from the Maryland Institute College of Art in 2017. Rivera Barbeito integrates a multimedia approach to his practice that draws from  a diverse field of  processes to give visual representation to concepts relevant to the present condition between Puerto Rico and the United States.  Rivera Barbeito currently lives and works in Baltimore, was an Artist-in-Residence at the Vermont Studio Center and has been... more
View Eric's Resume

Campamento delves into the commodification of Puerto Rico’s tropical spaces: the painting consists of 78 acrylic on paper squares that act as a stand-ins for each of Puerto Rico's municipalities, highlighting the susceptibility of these spaces to be treated as goods.

It portrays an already occurring liquidation of Puerto Rican land to private interests in light of the island's economic struggles exacerbated by the passing of Hurricane María. Facing tightening austerity measures, a massive on-going exodus of Puerto Ricans leaving the island, and precipitating property values, the island's territory is wide open for acquisition by an affluent class itching to make Puerto Rico its own private resort.

Gracias (2017), a site-specific structure that resembles a small shed, makes use of standard tropical architectural imagery and an attached air conditioning unit to portray ineffective design. Its walls, made to mimic concrete ornamental blocks commonly found in the Caribbean fail to contain the cooled air that the unit provides. The air conditioning unit, in turn, derives its power from a larger structure that dwarfs Gracias, and reiterates the persistent colonial relationship between Puerto Rico and the United States.

Defying the reeling economic crisis and more recent setbacks brought by Hurricane María, many Puerto Ricans are leading incredible efforts in reinventing and redefining standard systems of operation in the island. Reconstrucción (2018) takes a cue from these efforts, repurposing pieces from Gracias, to focus on how Puerto Rico can and will rebuild itself out of the remains of what María destroyed, led not by governments but by the ambitious and passionate individuals who want a better future for their home

Jardín is a collection of wall-mounted pieces and small-scale paintings.

On September 20th, 2017, Hurricane María ripped through the island of Puerto Rico. This series of objects attempts to record and represent the new-normals that shape a post-María landscape.

Given the extensive and constantly shifting dynamics of Puerto Rico's current status, maintaining a clear understanding of the ongoing political, economic, and social issues in the island is often a task that requires investigative knowledge into the circumstance and entities that have played a major role in Puerto Rico's unraveling. These drawings belong to a series of exercises in the synthesis of information, both personal and public, aimed at conveying complex systems of operation in and relating to the island through an often simplistic diagrammatic approach. Through them, concepts of futility, resource allocation and wastefulness, and inescapable cycles allude to Puerto Rico's long history as a territory under someone else's rule.