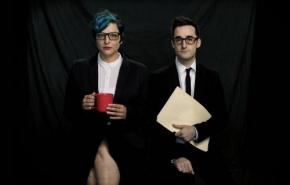 The Encounter is the two-person team of magicians Brian Kehoe and Annie Montone.  We explore stage magic (viewed by many as a "low" art) for its great and inherent storytelling potential.  We seek to create a hybrid of theater and magic that we call "narrative magic."  Narrative magic is a potent blend of traditional magic effects and playwriting, with an aim to create experiences that are part magic show, part theatrical performance.   We find that magic does something for an... more

Town X was first performed by The Encounter at The Jersey Fringe Festival in 2019 in Hammonton, New Jersey.

Town X begins with a problem:  there’s been some sort of “event” in town, your town, and you are trapped in a seemingly endless “emergency meeting” with two of the most inept, low-level governmental officials that ever existed.  We used influences from The Twilight Zone to The X-Files to The Umbrella Academy, to create a story that has been our most successful narrative magic production to date.  The blend of an exciting, suspenseful plot that culminates in a Big Question (Is stability worth the price you pay for it?).  Coupled with some of the most innovative, plot driven magic effects that we've ever built, the result is a typical Encounter mash-up (aliens! zombies! contagion!) that is funny at times, spooky at others, and asks the audience to, sometimes literally, step into the story with us.  To ponder the melancholy of artists longing for normalcy, living as we do, out on the fringe, and the nature of "normalcy" itself.

Jinx was first performed by The Encounter at The Cabaret at Germano's in 2018 in Baltimore, Maryland.

Jinx marked the third stage magic collaboration between Brian Kehoe and Annie Montone.  Taking cues from old-fashioned gaiety teams (like Gallagher/Shean or Smith/Dale), Jinx both trades on and upends the archetypal, male, comedy two-act.  Placing gendered expectations front and center, Jinx explores the nature of teamwork, equality, and the notion that the whole is sometimes worth more than the parts.  Jinx also showcases The Encounter’s most innovative magic concepts to date, including the signature “Two Headed Magician” routine.  Jinx is The Encounter’s modular show, having both half and full-hour versions.

Hoax (2016): What’s the difference between magic and lying?

Hoax was first performed by The Encounter in 2016 at The 14k Cabaret at Maryland Art Place in Baltimore, Maryland.

Hoax was written by Annie Montone in conjunction with Brian Kehoe.  It was directed by Deirdre McAllister.

Hoax, the second full-length stage show from The Encounter, takes the audience into a dimly lit theater wagon full of wonderful, terrifying objects.  We meet, once again, Maxwell Fink and Sarah Swanson, strangely reborn as a squabbling, second-rate vaudeville act on the run.  Part history lesson, part Faustian pact, and part hero’s redemption, Hoax wonders if the magician and the conman aren’t sprung from the same dark parts of the human psyche.  Is it okay to trick people only if they enjoy it?

“Where else can you hear about such cool cons as "Soapy" Smith, who had a field day in late 19th-century America; or the off-the-wall Mary Toft, who supposedly gave birth to a whole bunch of rabbits 290 years ago in an otherwise normal English town? This is the sort of play that will send you straight to Google seeking more info.”
-Tim Smith, The Baltimore Sun

“Fink vehemently repeats "I know the devil" like a scorned lover warning others what an asshole Satan can be. Stay away from that guy—he'll take your money, your dignity, and your soul.”
-Cassandra Miller, Baltimore City Paper

“Fink made it clear that in the present he was seeking redemption for his life of deception, and was here tonight – “For one night only!” – to save us from making his same mistakes.”
-Allie Press, DC Metro Theater Arts

Planchette (2015): Is science ever another word for magic?

Planchette was written by Annie Montone in conjunction with Brian Kehoe. It was directed by Deirdre McAllister.

Planchette, the first collaboration between Brian Kehoe and Annelise Montone as The Encounter, explores the painful, fraught, and ancient question of potential communication between the living and the dead.  Presented at the historic Carroll Mansion and invoking nostalgic feelings through the uneasy presence of the Ouija board (native to Baltimore), this narrative, theatrical show uses stage magic as a tool to place purposefully limited audiences at the center of a scientific experiment gone wrong, and asks them to confront the dichotomy of what we want versus what we believe.

“The Professor is frenetic, passionate about his obsession. His assistant, Dr. Swanson, is cautious, as a scientist should be, but she reluctantly goes along with his increasingly manic and unscripted experiments, within a short time we are riding the edge and receive indications that in fact the spirits are responding to his entreaties, a phantasmagorical ritual is already out of control in this cabinet of curiosities.”
- Daniel Stuelpnagel, What Weekly

Spectacle Obscura v. 2 was performed by DNA Theatre with Brian Kehoe in 2014 at Church and Company in Baltimore, Maryland.

Spectacle Obscura v. 2 was written by Annie Montone. It was directed by Kel Millionie.