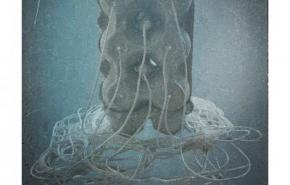 I make sculptural works and images from found objects and materials, placing things in relation to see where they ‘fit’ together, mirror each other or provide compliment or contrast.  Through photography, word-play and installation I attempt to capture the way things interact with the environments they find themselves in, making connections between texts that I am reading and images that resonate from my photographic and video archive.  Working ‘in the moment’ I use studio shadows and instant... more
View Elaine's Resume

'Domestic Structures' (*NEW 2020) is a sereis of small works - assemblages of domestic, recycled materials - reformed into independent, self-reliant sculptures that (whilst often complex in themselves) are also entangled in relationships with 'others'. The works embody ideas of (re)making and (re)balancing complex personal and interpersonal structures (psychological self-care systems and practical arrangements for home-work life) for our new domestic and digital realities in the time of COVID. The 'ovo' series takes its form from the paper-pulp egg-carton and many of its references from Greek Mythology. Objects from both the 'ovo' and 'delicate balance' series were photographed by the ICA as part of their BADAS documentation project in 2020 and will be brought together in March 2021 in a solo installation at 'Shelter in Place Gallery', Boston, Mass.

@ekplisso (εκπλήσσω (ekplisso) : to amaze, dumbfound) is an online collaboration between artists Elaine Fisher and Lucy Gresley, launched in June 2020 in response to the COVID 'lockdown', that utilises instagram as a means of publishing conversational artworks in real time. Primarily based around the instagram ‘post’ each artist submits in turn a two dimensional version of work that has been made as a direct result of an ongoing conversation. Work to date has focussed on an expanded idea of collage which includes two and three dimensional works that converge with the artists main practices. Conversations begin privately on zoom and are developed online as works are made and juxtaposed, relating to each other visually, and conceptually through titles and stories that are shared in the post’s comments.

Originating in an increase in email and Whats App messages when Elaine moved to the USA in February 2018, Ekplisso grew out of the necessity to continue sharing ideas and a desire to undertake collaborative ventures despite geographical limitations. In the strange new world of COVID Ekplisso took on increased significance as a place, a virtual studio (visit) in which we could meet and share work. At a time when Instagram has became a safe, socially distanced, proxy for the physical exhibit, Ekplisso has tested its limitations but also uncovered new possibilities for the exhibition of art; creating a situation in which collaborative work maintains its real-time, conversational relationships, showing work at the time of its making, as the exhibition is being built.

In Greek mythology, the Labyrinth (Greek: Λαβύρινθος, labýrinthos) was an elaborate, confusing structure built by Daedalus for King Minos to hold the Minotaur. From as early as 430 BC the Labyrinth was re-imagined as a Classical ideal, a single-path of seven-courses (without branches or dead ends) that spirals towards the centre. It was not until the Renaissance that the confusing concept of the Labyrinth was re-born as the popular hedge-maze. Labyrinth and maze have become synonymous, yet scholars call for the distinction to be upheld. For clarity, and to honour the Greek origins of the complex labyrinth, we have chosen to utilise the greek verb, εκπλήσσω (ekplisso, to amaze or dumbfound) to describe the various pathways that intersect, diverge and end as we make work in conversation.

'Domestic Structures' (*NEW 2020) is a sereis of small works - assemblages of domestic, recycled materials - reformed into independent, self-reliant sculptures that (whilst often complex in themselves) are also entangled in relationships with 'others'. The works embody ideas of (re)making and (re)balancing complex personal and interpersonal structures (psychological self-care systems and practical arrangements for home-work life) for our new domestic and digital realities in the time of COVID. The 'delicate balance' series takes its form from hard-to-recyle household objects such as plastics and metals and references the impact of plastics on ocean life and overproduction on climate change . Objects from both the 'ovo' and 'delicate balance' series were photographed by the ICA as part of their BADAS documentation project in 2020 and will be brought together in March 2021 in a solo installation at 'Shelter in Place Gallery', Boston, Mass.

The diamond (in the middle of things)

The diamond (in the middle of things) is a series of assemblages that find psychological meaning in their juxtaposition with new feminine translations and often overlooked interpretations of Ancient Greek mythologies.

As installation for 'The Shed Space' (Baltimore) in 2021, 'all armed and grown up' is a shrine to the goddess Athena. The title and centre-piece - a seated warrior - refers to a description of Athena's birth, arriving "all armed and grown up from her father's brain". In Psychological terms, as goddess of the city (of Athens), Athena represents the complete self, expertly holding together many moving parts, parts that are undergoing a constant process of change and renewal.

The work was inspired by a series of photographs looking through diamond shaped windows into a building site in New York City, each window providing a differend view on a world/work in progress. Miniature versions of these images printed directly onto wood panels on the interior shed walls will position the goddess as overseer to personal growth, the materialisation of which can now be seen mirrored, in the outside world.

I make short video and animation projection pieces from footage and photographs I collect on impulse as I might collect an object. These works are related to specific projects, becoming integral parts of exhibition installations but they also often sit slightly outside of known space, perhaps taking the work in a different direction or pointing towards work that is yet to come. Together they find their own project(ion) in relation, within and between works.

body of work in which paintings and the painting process are seen as αρχέ(τυπα), archetypal symbols for the emergence of consciousness. Emerging self-world landscapes are presented as portraits, archetypal symbols of the relationship between our constantly changing inner and outer worlds

Assembly painting series: Through processes of washing away, sanding back and overpainting, conscious and unconscious forces engage in doing and undoing – mythology tells us destruction is also a creative act. The stretched skin is fragile (calico and muslin laid bare with clear gesso) and requires a support solid enough to withstand the storm. Acrylic is the medium of choice because its fast-drying nature demands drastic, sometimes brutal, responses which help to keep the exchange active. Each painting is seen as a self-portrait, the portrait of an inner landscape under a constant process of renewal.

Threshold series: In a damaged painting, cut out shapes, with seemingly endless possibilities, are found unable to change beyond their severed forms. Through acts of folding, tracing, placing and consolidation the form is exhausted, finally found resting on its fragile support. There is nothing to be done other than to start again.

'Did you meet her? (D’m’t-er?)' is a series of works that trace the artists’ pilgrimage around Valletta (Malta) in search of the Mother Goddess. (Not) finding Her (in His tomb but) in the architectural elements of a crumbling city, the works explore the projection of unconscious contents onto the material world and consider ways we might uncover the suppressed feminine, by ‘cutting out’ the established patriarchal contexts that surround the things She is drawn to.

Collaboration with Lucy Gresley (2017) exploring the subjective plurality of artistic collaboration as an alternative lens through which to view the entanglements of things and our perceptions of them.

Framed by the study of Art and Archaeology at the University of the Highlands and Islands, Orkney (and incorporating a shared interest in Psychology) we recorded intuitive responses to encounters with what remains, exploring the potential of the right hemisphere (our primitive myth-making subconscious) to reach a deeper understanding of the past.

Part of a series of residencies on the Jurassic Coast between Portland and Eype (Dorset, UK) exploring sites of (ex)change – where land and water meet – considering the frameworks within which meaning is made and knowledge formed of a constantly changing world and establishing my artistic practice in the triangulation between site (the territory of investigation), studio (the research discipline of working- through) and gallery (re- assembling artefacts for public scrutiny). As in academic research (and as metaphor for the uncertainty of borders) the ‘work’ is considered as existing both in and between the points of the triangle (a constantly repeating loop) despite only being ‘known’ through its publication at exhibition.

A walk along Chesil beach is repeatedly explored through boundaries and their transgression. Pebbles are not permitted to be taken along this protected coastline but what constitutes a pebble? Photographs are taken at regular intervals to measure the phenomenon of pebble sorting - the pebbles get gradually bigger - as you head from east to west along the 18 miles of pebbles beach from the almost-island which becomes gradually mainland potected by a line of WWII pill boxes. Piddock fossils are examined for the same phenomena but refuse absolute categorisation. Weather Station - a giant inflatable ball - is co-opted as part of a commission for B-side festival to audio record constant change on this coastline. Will the protective bubble completely deny what lies outside?

Lower High Street Archive Project residency (collaboration with William Lindley), exhibition, artists book and symposium, commissioned by MEANTIME project space and supported by the University of Gloucestershire, exploring constant change on Cheltenham's Lower High Street through the lens of a Modernist building in the process of demolition. Drawings of historic buildings (previously destroyed to make way for the present building) were projected onto minimalist structures (studio reconstructions of the buildings (d)evolving facades); referencing an (un)realised Utopia and questioning the realities promised by the new development.