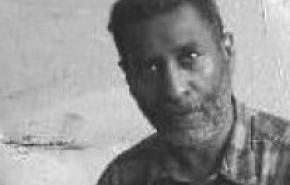 Don Griffin was born in Washington, DC, the younger of two children and moved to Baltimore when he was three [3] years of age. As a child he discovered drawing. His Grandmother once inquired why he drew one legged Westerns ? He replied, when you look at them from the side you can only see one leg. Art stuck with him throughout his school years. He later studied at the Maryland Institute College of Art. Griffin says it was here he actually discovered that he really was an artist. Revealed while... more
View Don's Resume

The abstract visual language in this series emphasizes spatiality and emulated
cursive writing. Watercolor paper serves as texture which enhances the visual
feel of this series collectively. Mixed media further provides a common thread
of connectivity linked to all my work. Printed Text was omitted in this series for
the sake of difference.

Strange as it may seem, it has taken most of the twentieth century for collage to be taken seriously as a major art form. It is now clear that a technical miracle has taken place in the past century. Of all the art media that originated, collage is one of the most far-reaching. Collage was one of the first media to recycle existing materials. No one artist has been credited with the origin of collage, because it occurred spontaneously at the beginning of this century. The elements of collage and assemblage are separately noticeable which makes them quintessential modern media.
This project is the visual experiences of various techniques that I have explored. In it, there is a predominance of commercial labels from corrugated boxes, however all of my art can be termed "Green" as it is essentially created from found and recycled materials having been thrown away. The "Red Line" is the continuity or the interconnectedness of all of the pieces. Some of the works in this series are imagery inspired by visual artists like Basquiat or Twombly whose work I've studied in the past and others by my current contemporaries. Along with visual artists, there are also musicians and R&B Vocalists influences found throughout the series. The very first work evolved from a jazz composition entitled Concierto de Aranjuez that I heard on an Internet radio station. It set the stage for the balance of the works to follow. Frankly, I would encourage one to listen to the titles found in those particular works to experience the depth of the message

As an abstract painter, I have developed a number of inventive techniques that emphasize Abstraction [color, form, and texture], which mirrors many years of experimentation with various mixed media processes that have become integral to my style. Through the evolution of time from 2005 to 2012, the use of text has taken the form of emulated Cursive handwriting. Interestingly, it has the mechanics of cursive witting without actually forming comprehensive words, ideas, or statements within the composition. The text itself was added as an element, and many times expressed no direct relationship to the work itself, other than having a textural effect through the font style & word groups. These word groups interest me simply as structures, and produce an artistic desired effect within the work. The scale of the text is another element used for visual interest. Originally, I employed text from various printed material. This included magazines and novels having aged characteristics with my favorite being encyclopedia pages printed on thin paper. All of these were incorporated into the work as collage.

At the beginning of January 2012, I became so engrossed with the dismal economic portrait that it stimulated this new body of work entitled "Wall Street Short Stories - A Story of Wall Street." It reflects a new direction in comparison to my work created in previous years, mainly via "Fine Parchment Paper" which forms the substrate. “Fine Parchment Paper” was selected for its tactile sense and the ability to be manipulated into a highly textural surface. This, combined with the rich interplay of crumpled, wrinkled surfaces creates a low relief sculptural quality. The Parchment Paper transcends typical painting in both look, effect, and its wonderful sound which when handled, resembles the crispness of new US paper currency. Creative Titles conjure the short stories developed by the activities that produced the Greed of the ugly beast disguised as capitalism, which nearly brought the financial system of the world on the brink of collapse.

MIXED MEDIA ON BRISTOL BOARD

This series produced in January was done on a new medium for me...Bristol Board. It interacts with gouache paint, gold ink, acrylic, oil pastel, gel ink and india ink to create a rare intensity absorbing, yet reflecting true colors, energy and light. The complex simplicity of designs is indicative of my view as the advent to 2013. It's very interesting how such a simple change of use from one paper to another effects the outcome of my statements as an Abstract Expressionist of the 21st Century!

Small work allows the experience of getting up close and personal with the artwork. The size of the artwork forces one to go in and really look. The “Jigsaw Series” was created to do just this, attempting to allow the audience the opportunity to see, feel and dissect each element on the works. Loew Cornell oil pastel, Daler Rowney acrylic ink, Gel ink, and polymer wood glue are melded into original collages on archival fine parchment paper.

Small work allows the experience of getting up close and personal with the artwork. The size of the artwork forces one to go in and really look. The “Post Card Series” was created to do just this, attempting to allow the audience the opportunity to see, feel and dissect each element on the “cards”. Loew Cornell oil pastel, plaster gauze, caran d’ACHE water soluble crayon, Daler Rowney acrylic ink, Golden acrylic polymer, Gel ink, and polymer wood glue are melded into original collages on 140lb. gsm archival cold pressed watercolor paper and archival fine parchment paper.

The Variegated Project is in support of Miles Davis' statement  concerning  change  which I embrace as a major component in my artworks.  Without this variance as a constant vision embodied in my art, it can tether stagnation , quickly … leading to boredom. I'm always seeking new vistas for the deviation from the previous work that I created.

The Public Notice Series integrates with the composition The  Mother's Suite, Movement II "Mother's Love" by The Fresh Cut Orchestra. Public Notice Series is a cross section of  contemporary America and the complexities and simplicities reduced to art forms and music. This is what I felt as an Abstract Expressionist African American Artist, on that day and point in time.
It's what music and art can do together for the joy of life.

Audio Visual Marc Carey with Abbey Lincoln & Don Griffin
Published on Mar 18, 2016
Audio / Visual Presentation with Marc Carey, Piano, Abbey Lincoln, Vocals
Featuring: "Down Here Below" and Don Griffin Fine Artists'
Abandoned Blues Part 1 & Part 2
Mixed Media Collage on Watercolor Paper.
The Abstract Expressionist composition titled Abandoned Blues Part 1 & Part 2 was created as a result of listening to Marc Cary and Abbey Lincoln perform Down Here Below. I chose not to use punching color to describe the strength and depth I experienced from this musical masterpiece of these two individuals, Marc Cary and Abbey Lincoln. Jazz has for a long time been in the forefront of my work as an African American Abstract Expressionist. The platform of Virtual Audio Visual Collaborations has intrigued me profoundly! It is my intention to offer these Gems upon every opportunity wherein I hear great Jazz and it connects with my work. When I hear it I know it! I suggest this video be viewed at Full Screen size, so one can become immersed in the Wholeness, of this virtual audio visual presentation﻿.

These works by Don Griffin are like soft weights. They are dense but delicate
and remind me of private notes written in a codex, reserved for a reader of
extremely high intellect. I feel a wonderful tension that causes me to teeter
between the living and the dead, due to the dense and often times atmospheric
separation between material above and below the surface. The work makes me
want to peek over the horizon line into the storm. It's beautiful and haunting stuff.
I feel something's coming, but I can't tell if it is a refreshing rain or a full onslaught
of stormy destruction. I'm drawn to these pieces in the way a photograph pulls me.
These are mysterious inscriptions of a private dance between Don and his thoughts.
However, there is enough information for me to create my own narrative and dance
with the work as well. 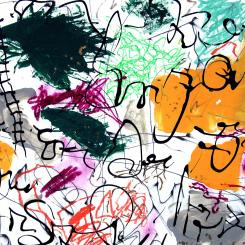 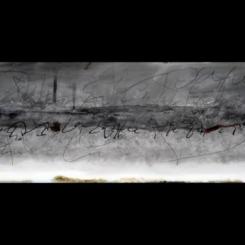