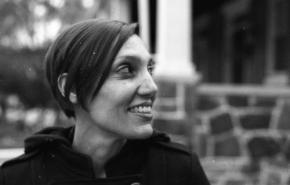 There Is No One What Will Take Care of You

There Is No One What Will Take Care of You is a 3-channel video installation the explores the relationship between a father, daughter and friend whose lives are tragically impacted by addiction.

This project is the recipient of a Saul Zaentz Innovation Fund grant, and will be completed in spring, 2023. A work-in-progress was screened at the 'Momento Mori' exhibition at The Parlor gallery in November/December, 2022. Michael Anthony Farley, in Bmore Art, described the work as "spectral and hypnotic."

Days in the Wake

Days in the Wake (feature film) is the story of a young woman whose father abandons her nine younger siblings at a Safe Haven facility and disappears. In his wake, she embarks on a quest to find them, and get answers to his seemingly unconscionable actions.

Days in the Wake was written at a residency at Dorland Mountain Arts Colony in CA. It was then accepted into Stowe Story Labs, and the Saul Zaentz Innovation Lab. Dina was able to meet with the real family members in Omaha, NE in summer, 2019, and is using their stories in her revision of the script. The film was a finalist for the 2021 Sundance Development Lab and is currently fundraising to shoot in summer, 2023.

Beneath the Remains is a feature film based on the novella of the same name by Baltimore writer Terence Hannum. The film is a coming-of-age mystery about teenage metalhead Gabby and the search for her older sister Steph, who has disappeared in the humid summer of their marshland home. There is a heavy layer of dread in this desolate, decaying and stifling environment, as Gabby grapples with the absence of her sister in a world without rules.

A concept short for the film, also entitled Beneath the Remains, was edited at the GrrlHaus Cinema Seminar Residency in Berlin, Germany in summer, 2019, and completed in December, 2019. The film is distributed on Flixa TV, an online platform for women filmmakers, and has screened in Berlin, Colombia and Detroit.

Commercial for the Queen of Meatloaf

Commercial for the Queen of Meatloaf is a short film based on the play by Emilie Feldenzer. Marge is a bored housewife. Rex, her inattentive husband. In an attempt to spice up their relationship, Marge employs the Queen of Meatloaf, an ephemeral concoction that seduces Rex and Marge into a state of slumber, while permeating the homes of consumers with her enchanting aura and addicting gustatory appeal.

Rex returns home from work to find Marge in the kitchen, where she has been slaving all day over dinner. But this will be no ordinary dinner. Tonight, Marge is serving the Queen of Meatloaf, “a gustatory experience altogether unlike ordinary meatloaf.” The Queen of Meatloaf emerges silently from the kitchen in bedazzled, human form. Rex is taken aback. Marge regales him with the Queen’s nutritional and nuptial benefits. They are so overcome by the Queen that they fall asleep at the table. The Queen, in direct address to the camera, explains her irresistible appeal. She begins to multiply, emerging in various other human forms and wreaking havoc on consumer TV sets, before disappearing with a slow buzz and a fading dot of white light on the black screen.

The film was awarded a Saul Zaentz Innovation Fund Production grant and was completed in April, 2017. It has screened at over 25 film festivals, won Women's Voices Now! Best Experimental Film and was nominated for the New Filmmakers Los Angeles "Best Of" Awards: Best Comedy Performance (Aya Cash) and Best New Media (Dina Fiasconaro).

Pucky's Pappagallo is a short documentary/personal essay about my grandmother's hair, and the impact it had on both her and our family.

There There is a short experimental film about a tired man's journey towards a voracious young girl in the forest. It was made for the Charm City Fringe Festival 2018, where filmmakers were given the same score and invited to make a film for it. It stars Lucas Cullen and Sailor Fay Cuddington and has also screened in Berlin, Germany.

Moms and Meds: Navigating Pregnancy and Psychiatric Medication is a feature-length documentary film that explores the options women face when they want to have children, but take psychotropic medication for mental illness. The film follows multiple women as they attempt to navigate the conflicting attitudes surrounding this issue.

Other interviewees include doctors, advocates and family members who influence, and are affected by, these decisions. The film focuses on the personal stories of the women, and the many facets, both positive and negative, of making such decisions. It addresses the struggle and emotional turmoil, as well as the hope and perseverance of the featured women, and advocates for their ability to make the best individual and personal choices for themselves and their families.

Moms and Meds is currently available on Amazon and Kanopy. Connect with the film further on Facebook.

This is an ongoing series of short, fun, quickly produced films during the pandemic.

Summer Babe was inspired by the water and light in a quiet summer backyard. I Don't Feel Like Myself is a a "raw look at the loss of a tooth, the painful reality of self image, and the amazing, beautiful Sailor learning the strength within."

Music videos for Baltimore based band The Holy Circle

Hearts Called was featured in The Big Takeover

Malocchio is a short experimental film which explores Italian superstitions.