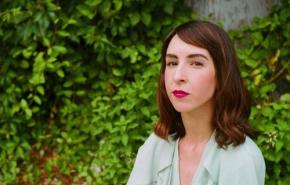 Danielle is a Baltimore-based multimedia artist. She received her B.S. in Film, Video & Theatre from Stevenson University in 2014 and her MFA from University of Maryland, Baltimore County in 2021. Her works have screened at venues in and around Baltimore including 2640 Space, Mercury Theater and Red Room. Her immersive projection installation 'What to Expect When You’re Expecting', was awarded the Johns Hopkins Saul Zaentz Innovation Grant in 2019. She has presented work internationally at Taboo,... more

For the past couple of years, I've been experimenting with augmented reality and video performance using a filter that transforms me into a mouse-human hybrid - usually when I'm restless at night. The AR filter was created by Craig Lewis and is publicly available on Instagram.

The Sky is Coming

The installation premiered in the group exhibition Home Bodies (April 13 - May 7, 2021) at the Center for Art Design and Visual Culture at University of Maryland, Baltimore County. The film has since screened at Gardenship in Kearny, NJ and as part of MoCA L.I.ghts in Long Island, NY.

My human character is a fulgarophilic - someone who is sexually aroused by thunderstorms. Ecosexuality refers to intersections between sexology and ecology though it is popularly used to describe humans who engage in sexual or sensual relations with elements of the earth. The ecosexual movement utilizes an intersectional approach that breaks down the intimidating guise of mainstream environmentalism and allows for people to come together to celebrate and connect with the earth in a way that emphasizes community building and reciprocity.

The ecosexual movement is included in queer ecological scholarship which examines how humans are included in (not separate from) a natural world and its systems that are ever changing as the result of social and historical influences. The Bradford Pear tree is a hybrid that was created by scientists in Prince George’s County, Maryland in the late 1950s. Envisioned as a decorative, durable tree that could survive various conditions, it was planted all across America starting in the 1960s. Today, the Bradford Pear is considered an invasive species. The root structures of the clones choke out nearby native plants and the supposedly “sterile” trees can reproduce through cross-pollination. The scent of the Bradford Pear tree is popularly associated with the scent of human ejaculate and thus I’ve used them as a metaphor for how we sensually engage our environment.

The two channel film concludes with a ‘facial’ which is a euphemism for the act of ejaculating on someone’s face. From a sex-positive feminist perspective, I interpret and have constructed the facial in this particular romp as a playful act in which both giver and receiver are enthusiastically consenting. At the same time, I acknowledge how this conclusion could be interpreted as an act of degradation or a power play. Storms have the ability to overwhelm, devastate, and at the very least instill fear in humans, partly because they’re beyond our control. Yet, we know that human-related climate change has manifested in drastic shifts in weather patterns. The intermittent fast-forwarding (and rewinding) of the storm by the human character meditates on our role in that equation while alluding to the ways we watch video content on our mobile devices. The cell phone video as a medium  recognizes that the digital tool, the body, and the resulting images are entangled, rather than separate, entities.

What to Expect When You're Expecting

In What to Expect When You’re Expecting, a woman who has been scientifically impregnated with the eggs of the endangered Loggerhead sea turtle nests on the beach one night while a local news crew provides live updates on the oviparous process.

This speculative fiction vignette poses the question: are we as humans willing to forgo having human offspring in order to help grow the populations of endangered animal species? Species that our earth damaging practices have had a direct hand in depleting? The film explores feminst scholar Donna Haraway’s idea of “worlding-with” and her writing on multispecies feminism, which suggests making kin with nonhuman species as a way to be responsible to each other.

Additionally, this work was born out of a mild obsession with the 2009 media trajectory of Nadya Suleman, a.k.a Octomom, who gave birth to octuplets as the result of in vitro fertilization. In our pro-natalist society, the tabloids and their followers initially praised Nadya’s super fertility, but were quick to scold when it was discovered the pregnancy was a result of corrupt medical science and that the single mother was on welfare and already raising six other children. The three channels present the audience with the action unfolding from three different vantage points: one is the media spectacle.

This project was supported by the Johns Hopkins Saul Zaentz Innovation Fund. The installation premiered at Baltimore's Mercury Theater in November 2019. The three-channel film screened as part of the 2020 Ars Electronica .ART Global Gallery (online).

Spilt is a lo-fi, live action, 180 degree, first-person virtual reality experience where the user’s periphery is obliterated as they embody a decapitated version of my body. The first-person experience is intended to destabilize the user’s subjectivity as they view my body as a stand-in for their own. This includes the inherent objectification that results from their inescapable gaze. Within the simulation, a white, cotton boundary is transgressed and a vulnerable orifice comes under threat.

I’d like to note something that may not be apparent from viewing the video outside of the Oculus headset. When the viewer is in the experience, they do not have the agency to look away from what is happening. They look where the camera strapped to my face is looking and since the scene is only 180 degrees they’re not able to turn away from the action. This is one sadistic quality I latched on to working with this medium for the first time.

In my initial research for this vignette, I watched a great deal of mainstream VR pornography, the majority of which is marketed towards hetereosexual, cisgendered white men and often perpetuates stereotypes that we are familiar with from 2D pornography. In Love, Consent & Arousal: Deterritorialising Virtual Sex, Cheri Lynne Carr makes the argument that this newer venue for erotica “channels desire through identification with repressive, molar forms of sexuality that ultimately reproduce sexual objectification and consumerism while limiting the pleasures of sexual and social becomings that bodies are capable of exploring.” With this in mind, I’m interested in this push and pull with the medium’s potential to enable one to explore and experience pleasure, but also its potential to restrict and why I felt it important to create something focused on this niche sexual desire.

I had the opportunity to present this research at Taboo, Transgression, Transcendence Conference 2020 and as part of my Rogers, Taliaferro, Kostritsky, & Lamb Fellowship lecture (May 2021).

Over the past seven years, I've had the great pleasure of collaboarting with several Baltimore-based musicians to create music videos. Here are some that I’ve directed:

Your Heart Claps For Me
﻿Gloop
﻿August 2019
Cinematography: Taylor Hebden

﻿Say It
War on Women
Edited by Brooks Harlan
2015

Beyond Me is a conceptual work that was realized as a digital billboard boat that makes its way up and down the beach in Ocean City, Maryland. I chose to commission this boat to display the words “Beyond Me” as an expression of my wonder surrounding this magical, only partially known part of our world and a sense of our inferiority in relation to it. The phrase is commonly used as a means of simultaneously dismissing and refusing responsibility: “It’s beyond me”. This is a meditation on how modern-day capitalism impairs our experience of the natural landscape and through its’ distractions hinders our ability to take action in order to defend our climate during a crucial time.

An umbrella burns at the beach and on concrete.

This video was exhibited as part of the Art of Women Invitational (Anne Arundel Community College, 2018) and Light City: On Demand (Baltimore, 2018).

Screened at Washington ArtWorks (March 2016) and during the Baltimore Film Fatales Panel at Maryland Film Festival 2017.

Living History explores nostalgia in the age of digital documentation. I restaged and filmed scenes from home videos recorded during my childhood. The home videos and recreations are collaged with documentation of a civil war reenactment that was performed in Appomattox, Virginia.