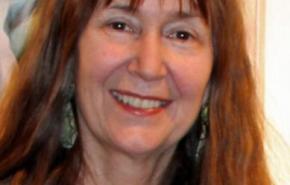 Cindy's art--maximal and eclectic--reflects her experiences as a world traveler and her time spent living in such places as Spain, France, Japan, Morocco, Colombia, and Burkina Faso.  This exposure to other countries and cultures has led her to embrace diversity and universal connectivity--two prevalent themes in her art.  Stylistically, she employs a technique that looks like collage, but is an entirely painted surface, the result being a sort of visual paradox as well as  a... more
View Cindy's Resume

Awash My intent in creating these paintings is to depict the diverse, often over-stimulated world in which we live and show both the positive and negative aspects of that world. I perceive daily life as both a collage of random elements that envelop us in a sort of digital fallout but also as a celebration of possibilities. By using a variety of colors, textures, shapes, and styles, I hope to stretch the parameters of cohesiveness and create a sort of universal jigsaw, which creates harmony and chaos simultaneously. I chose as a title for this series, the word “awash,” which means “flooding,” “saturation,” “overflowing,” but the word “awash” also draws parallels with a washing machine, an appliance that blends together disparate elements in a rhythmic, cyclical, uniformity. The blending I use is three-fold. First there is a blending of content that includes literal and ambiguous images. Secondly there is a blending of diverse media such as spray paint, metallic leaf, oil paint liquid plastic, and glitter. Thirdly, there is a blending of diverse artistic processes such as brush painting, spray painting stenciling, dripping, and scraping through previous layers of paint. However, unlike the metaphor of a melting pot, which also serves as a symbol for diversity, a washing machine blends together contrastive forms while at the same time maintaining their separate identity.

CELEBRATIONS
In this exhibition I explore the different forms of celebration and the subsequent emotions they elicit such as excitement, violence, radiance, gaiety, and fleetingness. I combine a variety of media on canvas to create explosions of contrasting forms which, on the one hand, evoke digital age bombardment, but on the other hand, celebrate the creative process itself. I subscribe to a maximal approach to painting that I believe reflects the current age in which we are living, an age in which one is presented with information faster than one can digest it, the result bringing about a simultaneous sensation of exhilaration and chaos. Although the paintings look like collage, they are, in fact, entirely painted. I use fragmented images resembling collage and juxtapose these with undulating, amorphous, organic forms, simultaneously depicting the forces of creation and destruction. Paradoxically, these elements of destruction, in the form of scraps from my personal environment as well as the world at large, link to larger parts from whence they came, so, the part becomes the whole. The juxtaposition of air-brushed and textured surfaces also creates ambiguity, with the resulting tableau treading the thin line between violence and celebration. I am Fascinated by the interplay of opposites and believe that when one shows contradictory elements back to back, one also suggests the territory that lies in between. It is this nebulous “in-between” territory that interests me, for it is this part that engages the viewer in the creative process.

Webster's Collegiate Dictionary defines "fantasy" as a "free play of creative imagination; a fanciful design or invention." These scapes are not realistic venues, but they are similar to clouds in the way that interpretation depends on individual perception. The word "scape" also suggests "escape," yet it is never possible to escape reality entirely in that we are always anchored to our physical surroundings. In all of these paintings there are elements of the fanciful and the literal, suggesting that no matter how hard one tries to make imaginative leaps, there is always a residue of the concrete--scraps, so to speak--that linger, that connect, that stimulate more journeys. Like all journeys, there is always a starting point; for me, it could be something as literal as a road sign, or as abstract as an epiphany. After I start on my journey, I try to relinquish control as much as possible to see where the idea leads. I'd like the viewer to engage in a visual odyssey, go beyond the visceral, make intuitive connections, and tap into the sub-conscious mind.

As the word "interior" suggests, these paintings deal with scenes within well-defined boundaries. These boundaries could be a box, a hallway, or a room. I was inspired by my gadget drawer--something most of us have at home, a sort of catch all for odds and ends. This drawer, unlike the cutlery drawer or the medicine cabinet, is characterized by its randomness and may contain typical household items such as matches and measuring tape or detritus such as gum wrappers and pieces of ribbon. Ironically, this assortment of disparate objects blends together in a way that makes perfect sense. Open the drawer, and it tells a story; it presents a personal, haphazard glimpse of its owner. Even in the frenzied assortment of random stuff, there's a sort of harmony. Metaphorically, a gadget drawer is the reflection of the subconscious in that the dream world also abounds in diverse symbols and bits of information that link together to form seemingly logical connections. Likewise, in waking life we are bombarded with scraps of information from the digital age in which we live. Because this digital fallout is incomplete and held together by tenuous threads, the viewer must "connect the dots" and finish the narrative. My goal in creating these pictures is to stretch the parameters of cohesiveness while at the same time maintaining pictorial harmony. The scraps in my pictures come from whatever happens to be in my immediate environment at a given time. I then use this information to craft an interior landscape and promote an open-ended dialog.

An antithesis to "Fantasy-Scapes," the "Un-Escapes" series focuses more on destruction than creation and confronting rather than avoiding reality. The creative catalyst for these paintings was the exploration of the apocalypse archetype and the inevitability of such manmade and natural disasters as earthquakes, volcanic eruptions, crashes, explosions, and viral infections. While all of these events are tinged with fear, the greatest underlying fear is the fear of death and the imprint this fear leaves on daily existence. This life-versus-death dichotomy appears on the canvas as splashes of color against black voids; while the looming shadow of death conveys a feeling of dread, its omnipresent certainty is what enriches the human spirit and helps shape individual existence. My intention is not to shroud a negative event in tragedy, but instead to show its complicity in the life cycle. In that sense, the paintings perpetuate the cycle of destruction and creation. They function as a sort of Hindu triumvirate, or a Phoenix rising again from its own immolation.

These paintings involve four disciplines: sculpture, photography, drawing, and painting. I begin by making small sculptures out of silly putty and then take photographs of them. The photos are then edited in Photoshop and printed out on canvas. I then use gesso to block out certain parts of the photograph (usually about half of it) and fill in these spaces with drawings. The final step is to use a variety of media such as rubber stamp ink, oil paint, and gold leaf, to complete the painting. The final result is a visual enigma that blurs the boundaries between collage, photography, and painting and invites the viewer to ask the obvious question: which part of the painting is "real"? This is a question that has become more prevalent in the digital age when the line between fiction and reality is blurred as a result of media bombardment.

These paintings express the Jungian concept of "the Self" through the introduction of animal components that represent man's instinctive nature and connection to the natural world. These animal spirits are woven into external environments that form part of the collective unconscious.

Remnants. They are pieces of something else; they are incomplete; they are vehicles to larger ideas, like words are pieces of language and numbers are pieces of mathematical equations. The scraps in these paintings function in much the same way as Lichtenstein's dots, Pollack's drips, or Davis's stripes in that they are quarks--small particles that combine to make a whole of something, but paradoxically, evoke ideas of destruction, a ripping apart of something, a digital disintegration. Webster's Unabridged Dictionary defines a remnant as "a trace, a last remaining indication of what has been," so the viewer must connect the dots to fill in the empty spaces and find closure. These "dots" are pieces of a fragmented universe, functioning simultaneously as by-products of information smog as well as archetypal motifs. In the process of connecting the dots, a scrap becomes the seed from which subsequent ideas are generated. They facilitate multifarious perspectives, but because of their incompleteness, they allow for limitless dialog. South African artist William Kentridge believes that "it is the job of the artist to smash the vase and then fashion something coherent out of the shards." These shards are arbitrary remnants of information that are "reprocessed on the canvas and reprocessed again by the viewer, thus perpetuating the cycle of creation and destruction.