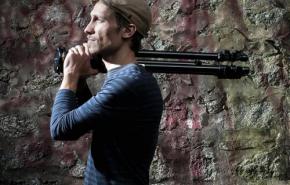 I was raised as a first-generation Greek-American, a son of immigrants. These two distinct and fascinating cultures forged my personal perspectives. Socioeconomics, cultural diversity, history, and architecture fuel my intellectual and emotional intrigue. As strong symbolic sparks, these arenas inform my creative process and evolution. My long-term photographic work is rooted in research and probes themes of identity, connection, nostalgia, and isolation. I have exhibited my work locally and... more
View Christos's Resume

At the dawn of 2020, universal freedoms were renegotiated as the world receded into quarantine. Lifestyles were fraught with apprehension surrounding social implications of an unapologetic threat among our collective future. We promptly discovered detachment drastically shifts routine and tests psychology. Humanity's fragile inter-connectedness amid a surreal stillness became a germane allegory of solidarity and perseverance in an uncertain world.

With natural light befitting mood, each tabletop represents distraction and amusement, a need seemingly amplified in a skewed world. As pastimes rooted in tradition, like mythology and literature, games are cultural agents for human experience—the zeitgeist of societies. While passing the time at home during isolation, on an old coffee table where memories abound, games cultivated safety, intimacy, and warmth among limited human presence. As serendipitous surrogates to customary social interactions, these moments hearkened back to a seemingly lost tradition, to nostalgic times from which I've reassessed valued relationships and my habitual approach to daily life. I grew intrigued by items, surface textures, and backgrounds encompassing an adjusted at-home mindset, a meditative glimpse of indirect portraiture. Reflecting upon and freshly embracing what essentially matters in this paused, ambiguous arc of time, has suddenly come into sharp[er] focus.

A shared meal reveals tradition and offers windows into culture, provides discourse, and speaks to identity. Personal electronic devices have rapidly modified our communal experiences. Our new paradigm of exchange, a routine of frequently consulting screen-tech, has become accepted and customary. We retreat into self-imposed, momentary bubbles of curation, oftentimes while in the presence of others. This new dichotomy is particularly observed among the time-honored and intimate surfaces where we break bread daily. For this series, I contemplate the indomitable implications technology has on human interaction by documenting personal meals shared with friends and family. Evoking the Dutch Golden Age genre of still-life painting as an aesthetic foundation, I intend these photographs as contemporary anecdotal counterparts representing the frenetic, hyper-convenient, always-connected, consumerist epoch of instant gratification.

Examining notable 19th - 20th-century eclectic architecture and decorative expression in the built environment, including the social-cultural values, narratives, and innovative trends which inspired them.  While sharing their compelling stories from that bygone period, I'm intrigued with how viewers experience these interpretive spaces as they evolve throughout generations, revitalization, and into the contemporary zeitgeist.

Unrelenting winds and formidable waves contour this volcanic silvery-white landscape into luminous, lunar-like surfaces unique to the Aegean Sea. Sharp cliffs, caves and valleys, occupants on amorphous alien terrain—I find myself enraptured and mesmerized. Sarakiniko feels like a notable nexus, a collective liminal ground of enchantment and study on the island of Milos. Among a diversity of visitors immersed in mutual awe, I momentarily disentangle from life’s customary bustle.Each explorer’s ephemeral approach summarily comprises the endless dream-like dynamism experienced here. As a former aspiring astronomer captivated by the cosmos, this majestic natural place rekindled fond moments of wonder and discovery.

Bosnia and Herzegovina is a mostly land-locked nation with a deep history. It declared independence in the 90s after a turbulent dissolution of the former Republic of Yugoslavia. Formidable multi-faction political strife ensued, which exacerbated ethnic divisiveness over territory, power and independence.  As a result, the Bosnian War began with armed combat & infrastructure destruction, culminating in mass civilian displacement and dehumanizing genocide.

The 1995 Dayton Agreement’s attempt to halt bloodshed and appease splintered parties left behind a fragmented society with root causes relatively unresolved. Bosnia consists of three identities: Bosniaks, Croats and& Serbs. Its government entails a proportional democracy with a rotating presidency. While peace was implemented, hardship is felt in a complex political governance, economic inertia and general distrust among people, ultimately fostering social tension.

During my visit, I sensed a curious, implicit melancholy, a dense atmosphere thick with latent ash. Named after its country's beloved insignia, Fleur-de-Lis is a visual essay about a scarred community coping withy vestiges of war, corruption and persecution; this amid a psychological terrain yearning for peace, tolerance and survival  of a time-honored heritage in a country without a call to account and among a global increase of tribalism, bigotry, and propaganda.

Throughout the countryside of Greece lie abandoned architectural frameworks dotting desolate and remote tracts of land. As most are new and unused constructions secluded from adjacent neighborhoods, I grew increasingly curious about their original purpose. In conversation with Greek citizens, I quickly learned many aspire to escape the “concrete jungle” that is city life. Some hastily lay claim to suburban land and illegally build to evade current and future building codes and exorbitant taxes. Among a current landscape of shifting legislation and regulation, as of this project’s date, architects and civil engineers purport the Greek state requires a builder complete the concrete skeleton of a building, aptly named the “super-structure”, within a predetermined time period. Once this contingency is met, the owner technically has no further legal obligation, resuming when one pleases.

As pillars of stalled progress, these structures resemble modern-day ruins, if not for an undetermined period of time. In a country renowned for its rich culture and beautiful destinations, I sought to investigate this architectural decadence and how its society, culture, and prevailing political and economic landscapes may contribute.

Why does a 6" pretty piece of inked green cotton-linen, part bacteria, part cocaine, with dead president heads, hold any value in exchange? As a notable technological artifact of civilization representing faith and trust, money’s tendril roots lie embedded within politics/war, ethics/greed, usury/taxation, class/wealth. What consigns to money and precious objects—often taboo, misconceived and lost subjects in contemporary societies—the desirable and functional status driving economies (and psychologies) in communities? In this ongoing series, I present a diverse array of historic and contemporary objects; some common, others long-defunct, few quite valuable. What emerges is a compelling timeline of civilization's attempts to display beauty, enact commerce, preserve savings, and speculate on intrinsic worth.