The Art of Comedy 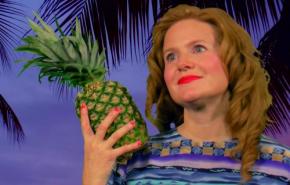 Christine Ferrera is a Baltimore-based writer, performer and comedian. She began her artistic career as a visual artist. However, after completing several series of paintings and prints, she discovered a tendency toward narrative in her work and made the leap to time-based media. Inspired by the experimental monologues of Laurie Anderson and the surrealist humor of Andy Kaufman, Ferrera's current work explores the intersection of performance art and comedy. Whether in the form of video, stand-up or... more
View Christine's Resume

Always looking to surprise and challenge myself, I thrive on doing stand-up comedy that verges on performance art. My style has been described (by me) as, "self-deprecating Third-wave Feminism." I sometimes perform in-character as Awkward Pauzez the Digital Comic - a very confessional comedian who delivers jokes with pre-recorded punchlines - or as the even more tragic Carrot Bottom: A Prop Comic - a comedy routine in which I employ various props, such as a banana, a fart machine and more.

In 2017, I was a featured performer with (Adult Swim's) Wham City Comedy on their USA tour, performing as America Lady - a hopelessly out of touch middle-aged woman attempting to do edgy political humor. I have had the honor to open for national headliners, such as Rhea Butcher, Gary Gulman and Michael Ian Black, as well as appear at comedy festivals across the country. I am a co-organizer of the Freeze Peach Comedy Series, which features women, poc, lgbtq and other under-represented comics and performers. I am currently in production on a half-hour comedy special for release in 2019.

Cats, Criminals & Comedians: The Untold Herstory of Feminist Performance Art is a PowerPoint lecture that tells an apocryphal "herstory" of feminist performance art. As the story progresses, we see how systemic misogyny programs women to loathe and undermine themselves as well as antagonize each other, thereby reinforcing the power structure. Using real and invented historical figures, the piece satirizes the genre while highlighting the very real struggles of women in a patriarchal art world.

After two decades working in the male-dominated fields of art and comedy, I felt inspired to combine my passion for performance art, stand-up and storytelling to focus attention on the issue that has largely defined my life and career - my gender. During a political climate in which misogyny is promoted at the highest level, Cats, Criminals & Comedians is a densely layered and sly homage to the tenacious, innovative and radical spirit of women. Currently in monologue form, I am adapting Cats, Criminals & Comedians for a theatrical run and tour in 2019.

Cats, Criminals and Comedians was written and performed by Christine Ferrera with original music by Dan Hanrahan.

Starbux Diary began in 2005 when I was a painter striving to make art by juggling several waitressing jobs. Along with student debt, I found that my art school education had left me with a passion to create but little clue as to how to sustain myself as an artist. I either had time to work in my studio or money enough to survive, but rarely both. This time/money conundrum left me feeling frustrated and powerless. One day, I was at a Starbucks store and noticed that their customer feedback cards read, "We'd love to hear your thoughts..." Taking their invitation literally, I conceived of an endurance art project in which each day I jot down my ideas about life, love and art on a comment card and mail the original to Starbucks' customer relations department. Sometimes, Starbucks writes back.

A selection of diary entries, drawings and actuarial tables, my self-published book, Starbux Diary: My 10-year Journey to Caffeinated Enlightenment, was included in City Paper’s Top Ten Baltimore Books of 2015 and described as “Hilariously personal.” A longer revision of the book is scheduled for publication in 2019 accompanied by a performance reading and book tour.

Stellar Cellar is a journey through a woman’s subconscious, an evocation of Dionysus and a radio talk show about wine. As the host samples each vintage, her memories are conjured – funnel cake and dippin’ dots on the boardwalk, monks in Macedonia, the loss of her virginity in the back of a Honda Civic. Call-in questions, a car salesman from beyond the grave, and a dystopian weather and traffic report move her further into the deep layers of her psyche until a fox and a bear appear, revealing the sorrows of the animals. Finally, the shade of Emily Dickinson guides the host into the outer reaches of the spirit-filled world.

Written by Christine Ferrera with monologues (Jim's Crazy / Jerry Karpeziak) contributed by Dan Hanrahan, Stellar Cellar is a devised theatre piece conceived for the stage by Temple Crocker. The piece has been performed in-progress at the Charm City Fringe Festival, 14 Karat Cabaret and VisArts. Now in its final form, Stellar Cellar is a strange, intimate and surprisingly funny exploration of memory and loss.

Google Art Video depicts a series of strange encounters between an artist and a belligerent version of herself. As the women discuss art, a cryptic dialogue ensues about the dynamics of creativity and self-sabotage, an urge with which many women artists struggle. This piece marks a pivotal shift in my work - the point at which I summoned the courage to overcome my self-doubt and pursue my life long dream of performing stand-up comedy.

Stephanie Ferrera, a brilliant Bowen Theorist and my mom, described the project as follows:

"With exquisite nuance in facial expression and voice, the artist captures the painful self-undermining emotional process inherent in creative work, and mirrors the more universal tension between longing and fear inherent in human relationships."

600 New Names for the Big Bang

What do a 1930's Chicago supper club, Edgar Allen Poe's bewildering treatise on the cosmos and a highly eccentric Kinko's customer in Milwaukee, Wisconsin have in common? 600 New Names for the Big Bang attempts to answer this riddle using monologue, archival photos and song. My long-time collaborator, Dan Hanrahan, and I tell the story of how we met and fell in love through a collection of fantastical tales and surrealist ballads.

Making Art Not Money was an endurance project in which I created something - a drawing, painting, photograph, video, performance, joke, poem, story, song, found object - each day for one year. In 2016, I quit working full-time for the first time in my life. As a meditation on labor and creativity, I made 365 pieces of art to celebrate the time I gained by not making money.

Corporate Romanticism imitates the devices of commercial media and personalizes it. A combination of painting, video and performance, this project was inspired by the feeling that marketers were trying to get in my head and create the illusion of a universal consciousness, as if to say, "I know you. These are your thoughts and your deepest desires."

Personal Ads are collaged images and text from newspapers and magazines painted to evoke hand-made signs. Each surface is saturated with eye-popping color and campaign slogans are transmuted into short poems.

"Ferrera paints in vivid, unnatural colors, superimposing artificial hues on her subjects (blond hair on dark-skinned women, for example) in the same way that consumer culture often imposes its beauty standards on its subordinates. That the slogans are written in broken English--familiar to anyone who has visited the non-English-speaking world--further emphasizes the misleading power of consumer advertising.

Ferrera also creates ironic tension by infusing sexual, racial, and political currents into these messages: In one work, a semi-reclining woman in a provocative red dress poses in front of a tube labeled 'feel real' with the slogan 'cock smart!' emblazoned underneath. In another piece, a grinning model proudly holds up a dispenser of some kind of cosmetic powder, framed by the phrase 'be a bomb!' Individually, each of Ferrera's collages is carefully composed and beautifully rendered; taken together, they are a damning and darkly humorous exploration of how advertisements articulate subversive messages about both purveyors and purchasers." (1/8/2003)

Tummyache was inspired by the craft of hand-painted signs and the advertising imagery of my youth. The paintings explore the collision of desire, satisfaction, overindulgence and nausea. At once, they revel in and critique the temptation ever-present in a consumer landscape of overly sweetened products and over-saturated images. 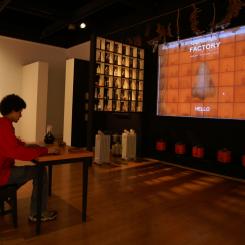 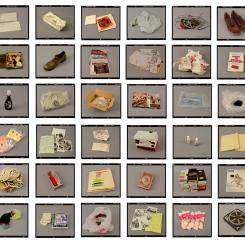 She Pod of Rotten Enchantment 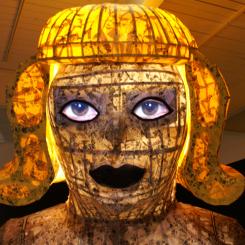 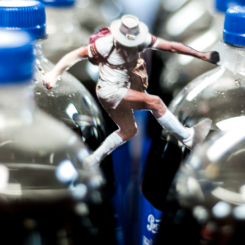 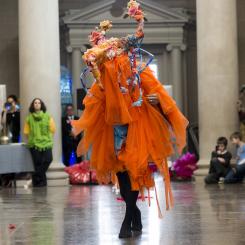 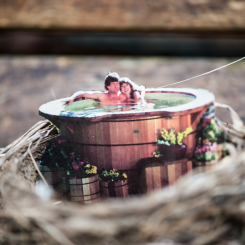 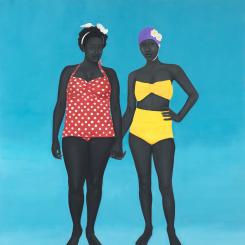