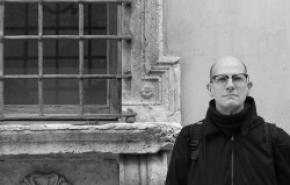 Chris Siron was born in Washington D.C. at Doctor's Hospital on Eye Street, N.W.  His educational experience includes the Painting and Printmaking curriculum in the Fine Arts Department at Virginia Commonwealth University in Richmond, VA.  He also completed courses in animation at the Children's Museum in Washington D.C., and photography at The Corcoran School of the Arts.  He is particularly enthusiastic about collage and multi-media.  In addition to practice in the visual arts,... more
View Chris's Resume

I participated in the exhibit "Birdland and the Anthropocene" at the Peale Center, which was formerly know as the Peale Museum. For this exhibit I created silhouettes of extinct birds, using anamorphosis to rouse an empathy for the loss of species. This series is titled Profiles in Carnage. I also installed a piece titled Misguiding Light, speaking to the museum's history of gaslight and the disorientation of city lighting at night on birds during their migration. The artwork I have made for this exhibit is a portrayal of birds that have become extinct, and to magnify the loss of those avian creatures by giving a slice of their profiles as if made when alive. Active or inactive, this is an imaginary record of their presence. Primarily, their existence is over, and by catching a glimpse of an individual bird’s shadow, will hopefully garner a sympathetic gleaning of the deprivation of life of the entire species. A traditional silhouette is a stark metaphorical, and literal trace of a human in a relatively fleeting interval of time which no longer exists. I chose to create silhouettes, imitating the tradition, while evoking instant anamorphism by using, as subjects, the heads of extinct birds instead of humans, and simultaneously including the human elements of hats, hairstyles, and clothing, with the intention to elicit a coalescence of the two. I became interested in the idea of using silhouettes when I learned of Moses Williams, a former slave of Charles Wilson Peale, who had been set free, then subsequently “hired” by the Peale patriarch to work for him making people’s silhouettes for the eponymous museum in Philadelphia. So, I desired to bridge a link to Moses Williams and the Peale Museum in Baltimore. Another connection I was seeking was the Baltimore Peale Museum’s gas lamp history, and how the Peale was involved in it’s development. Baltimore was the first city in the U.S. to use gas street lamps, thanks to Rembrandt Peale. Artificial lighting at night is one of the causes of bird disorientation when migrating, which is addressed through this piece, but also, I think of gas light and it’s projecting shadows. It harkens back to the silhouette art form, and even to Indonesian/Javanese shadow puppetry, and further in time, to the shadows on walls of caves in pre-history during the making of cave paintings. A traced shadow is similar to a photo in the freezing of time. The animal and human attributes I envisioned will resonate in a sympathetic chord. The moment of that cast shadow is gone as are the humans in the work of Moses Williams (and he, himself), but so are the species of these birds. Nothing is left, but vestige. There can be efforts made by human kind to prevent the destruction of entire species, but only through awareness of man’s impact on the environment, and the consciousness to change the direction of those actions which result in a negative loss.

These are window designs for the Patuxent Wildlife Research Center to prevent bird collisions. The final appearance on the windows are translucent from inside the building.

This series was produced for the multi-person exhibit When Worlds Collide, which was shown as part of Light City Baltimore in 2016 at the Top of the World Observatory in the World Trade Center Baltimore. It addresses bird/window collisions. I hand painted images on glass to reproduce real bird impact impressions.

Paper collages made from copies of nineteenth century engravings for a solo exhibit at the Arts Club of Washington entitled "Uncanny Remnant: the Collage of Chris Siron".

Animation for the exhibit "Unfriendly Skies" at Goucher Collage and George Mason University.

Projected slide images of paintings in the public domain, onto organic material.

Test animation for a work in progress and longer film. A metaphor for a skin graft.

In these photos, I am investigating the confusion of simultaneous subject-object integration. While making self-portraits one becomes the viewer and the viewed. Some of my self-portraits are achieved by leaving the shutter open for long exposure, with the resultant blur occuring in the image. In the case of digital photography, I employ the timer setting as well as a long exposure. These methods of self-portraiture have an inherent quality of spontaneity that is dependant on the imprecise composition. I have a tendency to favor improvisation and serendipity. I like this aspect of the process, but I also like the challenge of having to remember what is in the frame and having to partially imagine where I am in the composition that I cannot see objectively. It is accepted that the camera is an extension of the human eye. I am evidentally challenging this notion by having that extension see what it is an extension of. This becomes a loop. Seemingly, my eyes are behind and in front of the camera simultaneously. It is also like a game to try to sit perfectly still, when I attempt a conventional portrait of myself. I am reminded of the methods of early photographers where the sitters had to stay in the same position for long periods of time due to slow exposures.

These images are from an ongoing dialogue of conscious and subconscious transformations, sometimes resulting with a smidgen of whimsy and gloom simultaneously. I feel they lend themselves to storytelling at this juncture, and would like to create animations based on some of these current collages. This could result in tying them together in a narrative sequence. The source materials that I use for my collages are primarily reproductions of nineteenth century engravings. Max Ernst and Joseph Cornell are the two artists whose collages have held considerable appeal for me and their work has greatly influenced my sensibilities. Of the various artistic mediums that I have explored throughout the years, collage has been the most abiding. I am attracted to its recyclable nature. Eliminating the original context of the engravings allows me to present dream-like juxtapositions. Certain motifs have developed in my work and the resulting effects of their contrasting elements falls into the realm of psychological realism, a term used by the film director Carl Dreyer. What one perceives may be real, in a relative sense. A recurrence of subjects such as birds, anatomical features, and musical instruments has more to do with the psychological conditions that I am compelled to convey than simple compositional devices. However, I have a tendency to glean over much imagery during the process and as a result, I include components that harmonize with the motifs into a visual balance.
I excise the images utilizing an X-Acto knife with a #11 blade. I usually make an attempt to cut out a thin component such as an insect's leg. Alternatively, I blend in adjacent edges or draw an occasional line with a pen. I adhere my images with a glue stick and a brayer.
The collage process allows me to disclose private archetypes and manifest my personal mythology. Strange interludes, chimerical reveries, and the flitting images of the hypnoidal state constitute these hallucinatory tableaux. 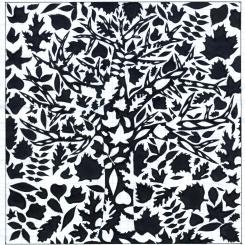