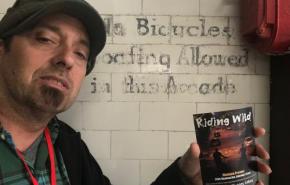 I am a documentary filmmaker born out of two decades spent as a print journalist writing for local and national publications. But while most people think of documentary as an extension of conventional objective journalism with 60 Minutes as the dominating archetype, I gravitate to the genre’s original definition which goes like this: “Documentary is the creative treatment of actuality.” These are some magnificent marching orders that are a lot more expansive than say “All the... more
View Charles's Resume

Street Videography borrows from the great Street Photographers such as Will Evans, Gordon Parks and Baltimore’s own Martha Cooper. But with video I press into documentary narrative but in a way I aiming for the freeze moment impact, a kind of core boring of that time, but also to press upon that moment as well.

This has been an accidental coalescence, going from one project to the next. This year I found myself launching The Speak for Peace workshop, where we interview community activists, print their image on a poster with a QV code in an ambitious effort to create street level dialogue. There was also the mural film project, commissioned by the Baltimore Office of Promotion and the Arts, where I found myself playing the part of the silent conduit for 20 art pieces and how they interact with the street-ecosystem. And finally the Health Care for the Homeless commissioned short documentary to capture the realities of someone who went from homeless drug addiction to cleaning up and finding an apartment, a job and enrolled in college. With each shoot, I realize tha the street is the heart of any community and yet we seal it off whether it be physically with walls or with our routines, which makes sense why in the streets is where we find the most evidence of dispair and hope.

The Baltimore Ballroom Project is a collaborative documentary focusing on Baltimore's African American Ballroom scene in anticiaption of a massive gala held at the Peabody in May 2019. I was brought in as a professional filmmaker to work with the Johns Hopkins Film Club to do emersion filming of three Baltimore Houses and get "real life" stories. This project lives in a gray area as almost all the students have moved on except for me and two graduate students, serving as producers. We are moving forward with this rich material. What you see is the First Cut. We will be making several passes. Despite this scene being quite underground (at least in Baltimore) I have been given amazing access, which is due to a mutural appreciation of the Ballroom's artform and our love of Baltimore.

Hidden in Plain Sight, A look at the Lost Jones Falls

The Jones Falls served as the nation’s flour mill capital, powered Baltimore’s Industrial base as well as served fresh water for the city.
Now more than 150 years later this documentary will apply a naturalist approach to what many see as a glorified drainage ditch. When not obscured by an elevated expressway, The Falls runs along a one-time Native American trail from the city’s harbor about 18 miles to the wealthy hills of Baltimore County.
This film makes no delineation between idyllic nature such as the herons nesting by a bridge as compared to the seasonal posting of the Health Department sewage spill warnings. History will be revealed as is, relics poking out of the ground, graves, a ladder left as a monument from a segregated pool. The film is in research mode, but the strategy is to reveal a portion of the search, the crumbling maps, the land records to stress the fragile state of the story itself.
This Angus Verde a la The Gleanersapproach, minus the self-reflection, will present The Jones Falls corridor in junk drawer fashion, as a composite of an ecosystem where the city carries the weight of its past as it lurches forward.

Riding Wild, A So Called Documentary

The best way to look at Riding Wild is as a road movie forced to live within the city limits.. But rather than being stuck, the documentary’s subject Dink, draws inspiration from creating a set of illegal trails along a raggedy patch of woods in the city to keep from the dangers in their neighborhood. Thus, Dink and his cohorts find wilderness in the most unlikely of places in the woods growing under an overpass. At times, Riding Wild plays like a counter-intuitive nature film in that it lacks all the puriety attributes usually assigned to presitne exclusively places . And yet they draw the same kind of inspiration especially when the sun sets, a bondfire roars and the police helicopters swoop by. As Dink puts it, "I get to play in the sand, this is my zen garden, how about that."
Funded by the Saul Zaentz Foundation, this documentary allowed me to concentrate on the use of music to propell and shape the story. All the music was original, created by Jason Gray with me serving as producer. The power of music cannot be over-stated and is something I will be exploring in the near future.

A photographer with a sideshow interest in fetish gigs isn't that unusual, but having his story told as a visual personal essay by his long time girlfriend offers some deep looks into a hard to articulate passion. When Sam Holden died at age 44, Donna Sherman, his long time girl friend was left as a participant and champion of his art. In Heel on Red, Sherman explores her conflict, including how Holden’s pursuit strained their relationship made more complicated due to her conviction that he traversed the clichés of fetish photography into the sanctity of art. The half hour film did well in underground festivals but we believed that its half hour length, although technically qualifies as a short, still kept it out of festivals as programers prefer shorts no longer than 10 minutes. We are not working on an eight minute piece that makes all the points of the longer version. This version should be ready by early 2020. The actual act of making this film in itself is a repurposing, a regeneration of the work -- photographs, many done by hand and meant to be seen in a frame or a book -- have now been collected into a rapid-fire digital infusion --- certainly something that was never imagined when Holden was still alive.

The Last Horsewoman of Baltimore,

What does it take to keep the storied stable running in West Baltimore? For the owner Dorothy and her husband David Johns, it means tending the five horses every day in a neighborhood where drug dealers work the allies behind them well as the old timers lounge around fire cans. It means traveling to the Pennsylvania Amish to find replacements for the century old wagons or baking endless pies to pay for hay. Dorothy believes if she attains funding to convert the stables into an equestrian learning center, something it has been doing for generations of kids, then she can re-establish the Baltimore tradition of bringing fresh produce to parts of the city, known as food deserts. For the last several years I have filmed Johns, whose grandmother was the first female Arabber and stable owner, as she quiets back alley drug use for girl scout visits and convinces state funders to help in repairs, giving the stable new life. This film will look back at the tradition but not with nostalgia as confronts she and her husband both in their 60s, only have so much time left where they can physically work the stables without a younger generation to carry on the tradition.

Documentary --- Fiddles and Football -- adding my own little spin on History.

The Crooked Tune, An Old Time Fiddler in a Modern World (2014), documents Master Fiddler Dave Bing who unwittingly serves as the flame-keeper to the very much misunderstood music known as Old Time. By following him through his classes from West Virginia to England and his informal “musical visits” with his mentors, all of whom are now dead, we get a detailed tapestry of this music.

The Last Season, The Life and Demolition of Memorial Stadium (2002), was my first documentary and remains a guiding light on what can be possible. This project was a team effort with filmmaker Joseph Mathew, whose follow up film Crossing Arizona was selected for Sundance. For two years we filmed the demolition, the last-ditch efforts to save the stadium and the ritualistic impromptu homages by people stopping by to pay their respects. In the process, we interviewed athletes from Cal Ripken Johnny Unitas to fans like Wild Bill Hagy. While the subject may be officially about the stadium the result was capturing a city at a cross-roads as it moves from collegial to being more professional. As one observer put it about Memorial Stadium, “This was our backyard.”

Both these films represent my obsession to press the pause button and swing the camera around to the areas that get little attention but still offer expansive windows into what makes this American culture tic.

Shakespeare for the likes of Us

To produce Shakespeare for the modern world, you got to tell your story for the digital minded. For me that meant creating short little pieces that range widely from sword training, to speaking in original pronunciation to the madman carpenter behind the evolving Globe style stage hidden away in a church outside Hampden. What I liked was the subtle message of youthful appreciation for Shakespeare, including the embrace of diversity as well as the love of the old text. This project demonstrated how to artfully tell a story, that is avoid offering accolades for demonstrating your distinction.

A work in progress, Delaware Bob will be a short film focusing on Marley's life in Wilmington where he worked in the Chrystler Plant. His mother was already living there and convinced her son to come up when Jamacia became too hot politically. This was before Marley became famous. Although his stay was short, about two years, his presence there is felt to this day. Some relatives still remain including his aunt who was living there until recently next to Marley's rowhouse. One Love Park was renamed in his honor and a festival created by the Late Ibis Pitts, a Marley confidant, runs annually in downtown Wilmington still overseen by the Ginny Pitts and her children. The film's goal is to reveal the power of when a town has a connection to a world-wide figure even decades after his passing.

The Dolley Madison House, a front seat to Washington D.C.'s history since the country's founding.

I was commissioned to do a half hour documentary featuring Judge Michel as the tour guide. The Dolley Madison house, located on Lafayette Park just across from the White House is run by the Federal Court of Appeals where Judge Michel presided for decades. The retired judge had a wealth of knowledge about the house which served as headquarters for General McCullen during the Civil to being the birthplace for NASA. But it became apparent following him around would never sustain a half hour documentary. So I turned to archival material. This project demonstrates not just the transformative power of archival material, but how accessiable this bounty of illustrations, photographs and maps are to one person with a computer. I so appreciate the luxuriary of going on The Library of Congress' Digital Collection and downloading history. The possibilities are truly endless for anyone looking for historical context. At the same time, I also wanted to make this project feel contemporary rather than a power point tour through history. 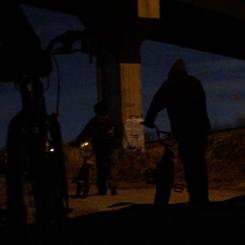 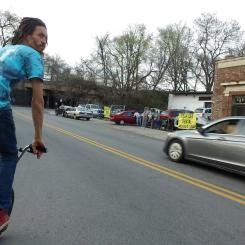 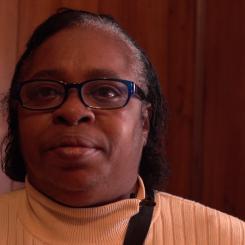 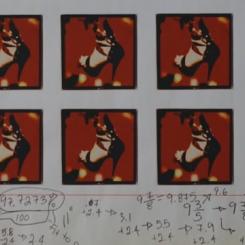 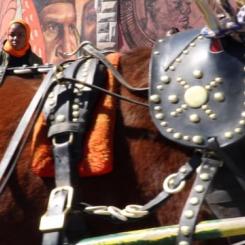 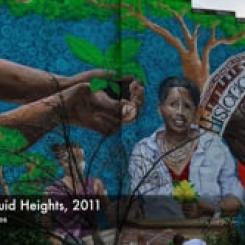 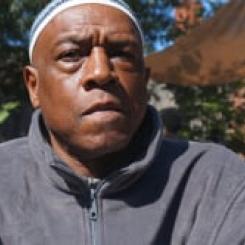