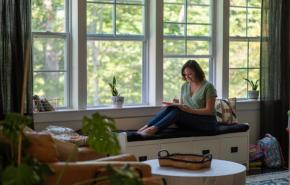 Annie Marhefka is a writer, publishing professional, and HR consultant in Baltimore, Maryland. Her creative nonfiction and poetry have been published by Lunch Ticket, Literary Mama, Pithead Chapel, Variant Lit, Anti-Heroin Chic, and others, and she is working on a memoir about mother/daughter relationships. Annie spent the majority of her career as an executive in Human Resources in the ed-tech industry before switching paths to focus on motherhood and creative writing. When she’s not writing, working... more
View Annie's Resume

A few years ago, I made the decision to leave my career as an HR executive after spending the previous 15+ years working in progressively more challenging roles. I always knew I wanted to write, but my career had taken me elsewhere. After graduating with my degree in Creative Writing, I landed a full-time job as a Human Resources professional with a plastics manufacturing company. I wrote on the side for newspapers and for myself, focusing on short stories and creative non-fiction, but as it turned out, I had a knack for HR. For the same reasons that my writing was generally well received, my HR work was as well – I understood people, and how they responded emotionally to situations and change.

In September of 2015, my mother suddenly and unexpectedly passed away. She was fifty seven years old. It was a shock to lose her this way – before I even knew I was losing her, before I had the chance to give her a grandchild, before I could tell her what she meant to me, before I could understand what it was to be a mother.

After she passed, I discovered boxes of my mother’s writing – folders on her computer and typed personal journal entries; in boxes, there were spiral-bound notebooks and hard-cover notebooks filled with her handwritten poems, short stories, and musings about life, motherhood, and daughterhood dating back to her teenage years. I began furiously typing up the handwritten copy. As I wrote, I couldn’t help myself from writing my own reflections and discoveries along the way, marveling at the things I was learning about this woman I called “Mom” that she never told me when she was alive. There was a lot to read, and I was still a very busy woman at work, so it wasn’t until the spring of 2017 that I came across this journal entry:

“There will come a day when I watch this family from afar, unreachable.   Someone, aching to see, feel, touch me one more time will comb over my left behind belongings, hoping to grasp a trace of the me I used to be.  Should it be Annie, I hope she writes my story.”

Here was the answer to a question I didn’t even know I had, in this one journal entry. I was meant to be writing this. She had the courage to have a voice, even if it was buried in her laptop or in a box in the attic. I had the ability to bring her voice to life. I could write her story, our story.

I gave my notice at work and began a new dual career: becoming a mother and writing our story.

My memoir-in-progress is a conversation between my late mother and I: her poems and essays inspire my own, and in the work of trying to understand her through reading the words she left for me, together we deepen our mother/daughter relationship.

At the age of twenty-two, I went searching in bookstacks for characters or narratives that I could relate to when my brother was killed in a car accident. Most of what I found were how-to guides on coming out of grief and what I really yearned for was someone who could describe the muddy corners of my grief, the parts where we think we're losing it and just need to hear that someone else had been there. I vowed to write about that someday - the thoughts we set aside in the margins and are too afraid to speak aloud. With each subsequent loss I've encountered - mother, miscarriage, friend - my mission has been to explore the crevices of grief, to figure out what I can pull up from the depths of it and learn how it can shape us. Adrift: Essays on Grief is a prose collection of these essays.