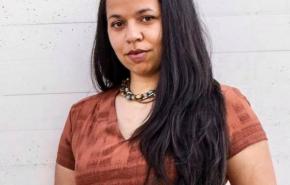 Annalisa Dias is a Goan-American transdisciplinary artist, community organizer, and award-winning theatre maker working at the intersection of racial justice and care for the earth. She is Director of Artistic Partnerships & Innovation at Baltimore Center Stage. Annalisa is also a Co-Founder of Groundwater Arts. Prior to joining BCS, Annalisa was a Producing Playwright and Acting Creative Producer with The Welders, a DC playwright's collective; and a Co-Founder of the DC... more

At the end of President Barack Obama's second term, after he had campaigned on the promise of closing Guantanamo Bay Detention Center, of the 800 men who were detained there over the course of 14 years, 41 remained. Now, President Donald Trump has promised to keep the facility open for the foreseeable future. Over the course of 12 years, or 4,380 nights, Malik Djamal Ahmad Essaid has been held without charge by the United States government at Guantanamo. As he languishes in his cell, his interactions with those on the outside interconnect with historical and mythical events in a riveting exposé of the legacy of global colonization and the continued violent coercion of black and brown bodies. 4380 NIGHTS asks how we might acknowledge our interconnected past and present moments and together build a future free from the walls.
Production History
4,380 NIGHTS had its world premiere, directed by Kathleen Akerley, at DC's Signature Theatre in January 2018 as part of the 2nd annual DC Women's Voices Theatre Festival.
"a treasure" - DC Theatre Scene
"a lush historical buffet" - Washington Post
"deeply felt" - New York Times
"haunting and poetic.. a work of genuine humanity and insight" - Washington City Paper
"gutsy and well-crafted" - Washington Blade

The Kilroys
4,380 NIGHTS was recognized as an honorable mention (top 21%) on the 2017 Kilroys list of un- and underproduced plays by female and trans playwrights of color.

#RESIST: THE MUSICAL is a comedic satire that unravels the ways the inherent narcissism of the #resistance (as seen online) may actually be a manifestation of the same kind of individualist showmanship that gave rise to the era of Trump. In #RESIST, residents of the Big City are excited to vote for their first female president. When things don't go as they expected, Big City residents turn to social media to unleash their rage and to hashtag-resist. Except, this doesn't go quite as they planned either. In the age of the #resistance, our new musical aims to skewer white feminist ideology, performative wokeness, and the liberal fantasy of a post-racial America. Songs include, "How Did This Happen?" “Let’s Hashtag Resist,” "A March Will Solve Our Problems," and "Take a Back Seat, Becky."