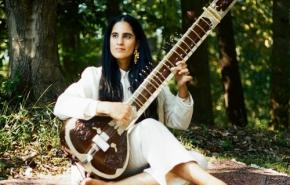 Amrita “Ami” Kaur Dang is a South Asian-American vocalist, sitarist, composer and producer from Baltimore. Her sound ranges from North Indian classical fused with noise/ambient electronics to beat-driven psych and experimental dancepop. The work references her hybrid identity as a first-generation South Asian-American, Sikh upbringing, musical education, as well as the chaos and spirituality of the landscapes of both Baltimore and urban India. Picking up her first sitar when she was twelve... more
See 2020 $10,000 Mary Sawyers Baker Prize Winning Portfolio
View Ami's Resume

In late 2017, I composed and recorded a couple of studies for sitar and electronics. At the time, I was working full-time and more interested in the visceral aspect of making music and also wanted to start and finish works more quickly rather than agonizing over a lengthy process. I challenged myself to see what would happen if I limited myself to a more concise set of parameters—recording 2-3 improvised sitar performances with one or two pulsing electronic timbres and drones. I was pleased with the result. Later, in the summer of 2018, I came back to them and decided that I wanted to explore what would happen to create a full series of these works—starting with electronic sounds using computer software plug-ins and then sitting down to record sitar in short bursts in my home studio. The result is this series of music—a full-length album devoted to (mostly) improvised sitar (or quickly composed) and ambient electronic sounds.

While considering and creating these works, the theme of Indian and Middle Eastern folklore popped up in my life and continued to surface in different ways. I have long been fascinated with the four popular tragic romances of Punjabi, that is, Sohni Mahiwal, Heer Ranjha, Sassi Punnun, and Mirza Sahiba. Sohni Mahiwal, Punjab’s Romeo and Juliet story, particularly interested me as it tells the story of a couple, Sohni and Mahiwal, whose love is forbidden by Sohni’s family. Soon after Sohni’s parents learn of their interest in one another, they arrange for her to be married to another man. After Sohni’s marriage, Mahiwal, her lover, decides to settle on a property across the river from Sohni and her husband. And when Sohni’s husband is away from home, traveling for work, she paddles across the river night after night (with the help of a clay pot to keep afloat) to meet him. Her sister-in-law spies her on her journey and replaces her clay pot with an unbaked pot. The following night, Sohni picks up the urn and starts to go across, but since Sohni can’t swim, the unbaked terra-cotta gives way, and she drowns.

This archaic tale may seem irrelevant today, but many South Asian (and particularly Punjabi) families continue to be very strict about marriage. I was engaged in 2017 and in early 2018, my husband and I were married—much to the chagrin of my parents. During this time, I revisited this folktale and reflected on changing practices and attitudes over generations. As an educated person living on my own, I haven’t been dependent on my family to financially support me in many years, which means that my choices are my own (unlike Sohni’s). But the attitude toward these major life decisions (among some families) hasn’t changed very much.

Sohni's story is also an example of domestic abuse that leads to her death--which is still a rampant problem in Pakistan and India today. It is an accepted form of domestic violence that has pervaded South Asian culture for centuries.

While working on this record, I was also invited to perform original music to an act of the first feature-length animated film The Adventures of Prince Achmed in September 2018 at the Parkway Theatre in Baltimore. The story is derived from Arabian Nights or (One Thousand and One Nights), which have been translated by many Western (primarily British) authors. This animated adaptation of one tale, “Prince Ahmad and the Fairy Peri-Banu” (according to Richard F. Burton’s translation) features an Orientalist (and often problematic) interpretation of the story, despite featuring stunning and intricate shadow puppetry and innovative light and film painting techniques by renowned early 20th century filmmaker Lotte Reiniger.

I decided to devote this series of sitar and electronics studies to Eastern folktales in translation, which seems fitting since my music is a combination of east and west (a product of a hybrid, intersectional identity) and the traditional and the contemporary, the acoustic (visceral or analog) and the electronic. Here, I’m less concerned with what is inappropriate or appropriate in the western adaptations and translations of these stories but more interested in how we critique this work over time—how the meaning changes relative to the political discussion of today. And also, I reflect on how these narratives (which I read or was told as a child) have affected my identity as a Punjabi, Sikh-American woman musician growing up in the west with a deep fondness for my heritage. It’s impossible to fully comprehend how this folklore has affected who I am today and the work that I make, but I know that it has certainly influenced my interest in retaining some fragments of eastern timbres and themes (the sitar) while breaking the rules—through the use of electronics and departing from the traditional Hindustani raga used in Indian classical music. With a global, intersectional identity, I am neither the eastern storyteller nor am I the western translator, but my music serves as a soundtrack to consider the themes of these folktales, how they have been conveyed over time, and their relevance today.

This body of work was released as a full-length album on vinyl and digital formats by Leaving Records in August 2019.

Uni Sun is my 2nd full-length album that features eight experimental, indie pop songs. I wrote these songs between 2011 and 2014 which the record finally being released in 2016. Kate Levitt played and composed the live drums on this album, and we co-produced the electronic beats, with the exception of Sublimate, which was co-produced by Adam Schwarz.

Ami Dang is 1/2 of Raw Silk, a Baltimore-based duo featuring sitar, voice, cello, and electronics. Raw Silk emerged from Alexa Richardson’s and my experimental improvisations. We released our self-titled debut album in June 2018. On this album, I performed and composed sitar, vocals, and produced the electronics. Raw Silk is often a weave of two fabrics, especially two colors that are woven together to create a duo-tone effect. This duo-tone texture represents the combination of Alexa’s and my work together to create a glimmering, yet sometimes rough, musical landscape.

In this debut album, we present five pieces that create a rich and complementary dialogue. Cello and sitar discuss, get heated, grab wrists, and twirl wildly over an electronic landscape of textures. My vocals interweave throughout—yearning, cerebral and commanding.

Ami Dang, Alexa Richardson and Jonna McKone collaborated on “Ruins,” a multimedia installation and performance at The Walters Art Museum featuring film by Jonna McKone; sitar, voice, and six-channel electronic sound by Ami Dang, and cello and sound art consultation by Alexa Richardson. The work premiered in August 2017 as a part of The Walters Art Museum Art.Sound.Now contemporary works series.

Raw Silk performed the electric cello, sitar, and vocals next to the muses in the Greek galleries. As listeners move into the two adjoining gallery spaces, the live performance is altered with electronic effects. The peak of the manipulation occurs in the front gallery next to the Tel Halaf Fertility Figurine, the oldest object in the museum. The music spills into the other galleries, creating a layered soundscape—paralleling the ways the modern museum experience is mediated by reconstruction, contextualization, text, conservation and curation.

The video clip features a 10-minute excerpt of the 28-minute performance and installation. Both Greek Movement A and B are captured in this live video.

This movement uses a rhythmic structure of stomping and clapping drawn from Sufi Zikr music, thought to be the closest contemporary music to that of ancient Egypt. The rhythm is cyclical in nature, building and speeding up and then slowing down, only to restart the cycle again. The tonality is a traditional Arabic scale. Ami opens the piece by singing an inscription from an ancient Egyptian tomb from an ancient God and directed and people of the future, in transliterated ancient Egyptian:

O you who are alive on earth,
And you who shall be born,
Come, let me lead you to the way of life.

This movement is based on a fragment from a Hurrian hymn (no. 6) that is claimed by some to be the oldest known melody, which dates to approximately 1400 BC and was found inscribed in cuneiform on clay tablets excavated from the ancient Amorite-Canaanite city of Ugarit, a headland in northern Syria.

The tetrachord is the foundation of ancient Greek tonality and provides the backdrop to this final movement. Ami sings in two ancient languages, including a segment of the Old Testament written in ancient Aramaic warning people to abandon the old Gods in favor of the new:

Thus you shall say to them, “The gods that did not make the heavens and the earth will perish”

Ami Dang also sings in ancient Greek a quote from Heraclitus in the 4th century BC:

No man steps in the same river twice; Nothing is permanent except change.

The movement ends with a stripped down and minimalist mournful elegy to the ancient cultures and objects of the past.

As of December 2018, Raw Silk (Alexa Richardson and Ami Dang) are currently revising the music and sound composed for this installation to adapt it into a full-length record. We hope to be finished in mid-2019.

This project features a selection of collaborations with other artists from 2014 to 2018.

This project features a selection of works from Hukam, a full-length album released in 2011. Ami Dang composed, produced and performed voice and sitar on all songs attached here.