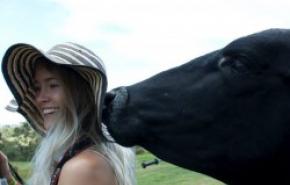 I am a conceptual and interactive artist who moves through the world slowly and with awareness. I am grounded by movement and mindfulness practices which allow me to pay closer attention to the world around me. Inevitably this slowness leads to inquiries which sometimes culminate in projects. The inquiry could be anything as micro as a weed growing in a crack or an unhealthy obsession with a crooked tooth that I have, to something as macro as extractive economies that destroy the earth. Ultimately, I... more
View Amanda's Resume

2016
In the train, metro, bathroom, and anywhere public where I could catch the bored eye of a fellow commuter, I placed A sticker inviting a text. "Send me a picture of your belly button". Innocuous enough for belly buttons to start flooding in to my phone from perfect strangers. In this work, I reflect on humanities common physiological feature - the navel - the place where we first receive life-giving nutrients from our mother. It also alludes to selfies as a modern Omphaloskepsis (navel gazing) practice.

BB is also the nickname of my late step-brother who passed away in November of 2015. Then Trump was elected in 2016. I was reflecting on shared cycles of life, loss and mourning.

Employing materials that have an inherant life cycle, I utilize Uhaul moving blankets. Reincarnated from old denim, these recycled blankets have journeyed all over the country, covering families cherished belongings, until they made it into my hands. Indigo and mud are both used in dying the works in this show, and they too have a relationship to life, decomposition, transformation and alchemy.

One can see the infinite possibilities

in gazing at the stars;

the vast expanse of time

cradled in an old forest;

the places one can travel

A lot of inspiration for these works came from cleaning out my family homes - shutting them down post mortem and finding inspiration in the materials I could take that no doubt held an energy - particles and cellular remnants of these lost loved ones. Many of these tabernacles are made with the pillow cases of the deceased loved ones.

This body of work investigates how man extracts value from the land. I created carved maps of landscapes with precious resources and painful pasts. Blemishes and flaws are revealed in the grains beneath the surface of the ply as the terrains are traced using computer numeric control. I imagine a future where there is nothing left to mine and where these relics with embedded cryptocurrency mining computers are all that we have left.

Some of the works’ formal references are drawn from religious funerary rites and American quilts. They explore aesthetics of various power structures and reflect on histories of colonization of lands caught in the crossfire of humans’ thirst for power and material possession. Using dyes made from soils collected from these sites, I constructed quilts as both a reference for land plots and lotteries and connotations of gridded games that emphasize acquisition.

An added layer to the exhibit is that some works can be scanned with the viewers' phones to reveal digital relics composed of images and 3d scanned stones from my visits and interviews. Upon entering the AR website, power is taken from the viewer's device and is used to mine cryptocurrency. This dynamic relationship of authority, permission, and control relates back the subject of coloniazation and the mistreatment of people and lands alike.

Sitting Fairly Still is a series in which a program tracks my movement as I sit for an indeterminant amount of time. My subtle twitches and the undulation of my breath are my paint brushes. This work reflects on the ways in which doing nothing, i.e. sitting still, is an antidote to negative effects capitalism and patriarchy have had on this planet.

~
This series is featured in "It's Nice Out Here", an online art pavilion part of The Wrong Digital Art Biennale. Pavilion will be online until March 1, 2020.

Link To "Mouth Wide Open" (sound scores and recordings), 2019
A series of sound scores drawn from my teeth as they morph and evolve with my ever increasing entropic state of being. An ode to my vanity. A portrait of contrived, formal epigenetics. A reflection on what biologists are beginning to uncover about the complex dance of genes that create personality and identity, a dance that stretches far into the past and shows that each “identity” is composed of a swirl of different influences. If the arrangement of my teeth, something seemingly so solid and stationary, can be changed and redirected over the course of a year - what other aspects of my identity and genetics which seem fixed are actually fluid?

“When we really look at ourselves, then, and the things around us that we took to be so solid, so stable, and so lasting, we find that they have no more reality than a ... A Mirage, a cloud castle, A dream, an apparition, Without essence, but with qualities that can be seen.”

This work analyzes societies’ closeness to devices - and their ability to heal or curb loneliness, pain, stress, anxiety, ect. while also assessing the increasing feeling of  loss of self in an advanced technological society (hence the surge of “self-help” and therapy industries with their quest for wholeness and centeredness). What effects (positive or negative) will devices have on the human body and psyche? We are now able to know the physical self in ways which were once very hard to imagine. We can track our heart rate, steps we take, hours of sleep, ect. all through a bracelet that communicates with an ap on our phone. While we are becoming closer to knowing certain aspects of the human body better, there is an increasing separation between body and self.

"Love Bed" is created out of the vocal waves of 60 people saying love. I create a topography out of language on which the body is able to absorb the meaning through touch rather than sound or site. In this resort, Bed=Island, all kinds of love is available through the most simple interactions - lying, sitting, standing, breathing. It is a product that can be misted on and absorbed through the skin as rosewater in an atomizer. On one hand, I naively hope and sort of believe that this is possible, and on the other I am commenting on the simplification of intimacy in our digital age, and healing in the new age.

Love is a powerful word. It is also loaded and tied to strong emotions. Luv is a modern take on the word love. It is pronounced the same but it holds different connotations. It is used in a more casual and loose manner than the word love. A contributor to urban dictionary defines luv as “a casual way of saying you really like someone without freaking them out by saying I love you. Commonly used by people early on in relationships, where it is too soon to say I love you.”

“Love v. Luv” is a study on how different people say these words. When I record, I ask the person to think of the feeling of each word as they speak them. The frequency and volume with which different people say the words changes the peaks and valleys of the form. A pattern emerges, but every love & luv is different. This is a very rational approach to understanding an emotionally charged subject matter.

There is a lot to be observed in the ways people differentiate these words. I try not to ascribe too much meaning to the way the word has been spoken, but I do make notes and observations about the person’s form of “love” and “luv” based on my knowing them and other circumstances surrounding my relationship to them.

I am interested in the multiple transformations that take place through this process. The word goes from written form to spoken sound which is translated into a string of data that is used to create a form and then that is milled from a yoga block. The block is used in yoga to support the body in uncomfortable positions to let it relax more into a pose. Language is supported by the body, and here I have create a mutual relationship in which the body can be supported by language.

In this installation of “love vs luv” I installed the words which have been carved by a CNC router with a pile of what remains from love and luv along with an instruction for a heart exercise.

In this performance, each time a new tweet with the word “painful” is received, an electronic candle automatically lights up (for 2 seconds) for that tweet. The idea that there is an undiscriminating machine praying for all pains, big or small, physical or emotional is of interest to me here. It is no more a choice on the part of the person tweeting to be prayed for as it is for the altar to be lighting offerings for those peoples’ pains.
As I meditate on the painful tweets that are coming in, I make an offering by touching my forehead (or third eye) to an i-pad, which triggers a new 3-d model of a vessel. Mateo Marquez participated by writing the code for this trigger and using a video mixer to create visual feedback. I composed the sound using recordings of my voice and cell phone tones. The volume increases with each tap of my third eye to the I-pad.

2015
Maps of the landscape of my bed after two amorous bodies left their marks.

Public intervention in the Baltimore Landscape meant to draw the observant passerby's eye down to connect with and become inspired by nature and the growth that can take place despite oppresive conditions and in the most unsuspecting circumstances. These little plants spoke to me, and told me to press on, so I wanted to recreate that experience for others.