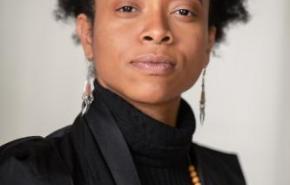 Ada Pinkston is a multimedia artist and cultural organizer living and working in Baltimore, Maryland where she is a lecturer in Art education at Towson University. Born in New York, her art explores the intersection of imagined histories and sociopolitical realities on our bodies using performance, digital media and sculptural forms. Over the years, her work has been featured at a variety of spaces including The Smithsonian Arts and Industries Building, The Baltimore Museum of Art, The Walters Art... more
View Ada's Resume

no names gods names her name

This project began as a conversation with 3 other artists about what the process of naming and renaming is and means in different communities. The Nature of Nomenclature was a group piece. Within this ensemble of performances, "no names to gods names her name" was a solo piece that explores the action and process of naming in individuals within the family structure and the naming of groups of people in the society structure.

As my name has reached its third iteration on my maternal line, I decided to research the meanings and relevance of my name to my family history and to the history of the region my family is from. In this research, I learned that there were many elements that were missing in the stories of the women that came before me.

I used these silences to create a video projection that played alongside my live performance of what I imagined of these women to be. Interlaced with the video montage were images from the 18th and 19th century photo archives at the Schomburg Center for Research in Black Culture. Through this inter-disciplinary performance, the voices of the past and present met on one stage.

An assemblage of the black female body in popular culture through the lens of The Hottentot Venus. This performance includes projections of words, sounds, and images of contemporary online mass-distributed images juxtaposed with photos and imagery from the 19th century. 2012.

I've known; rivers:
I've known rivers ancient as the world and older than the flow
of human blood in human veins.
My soul has grown deep like the rivers.
I bathed in the Euphrates when dawns were young.
I built my hut near the Congo and it lulled me to sleep.
I looked upon the Nile and raised the pyramids above it.
I heard the singing of the Mississippi when Abe Lincoln went
down to New Orleans, and I've seen its muddy bosom turn all
golden in the sunset.
I've known rivers:
Ancient, dusky rivers.
My soul has grown deep like the rivers.

The U.S. is the largest consumer market for bottled water in the world. In 2008, U.S. bottled water sales topped 8.6 billion US gallons for 28.9% of the U.S. liquid beverage market. Americans drink 21 US gallons (79 L) of bottled water per capita per year.

The first part of a series that is a requiem for facile access to clean drinking water. The focus is on the confluence that exists or cannot exist within bottles. The process began with a tactile evaluation of and meditations on the prosaic images and sounds that are associated with water.

The first channel is an assemblage that reflects on commodification.

The last channel is a video assemblage that is a reflection on the spiritual and meditative, elements of water.

When I saw the water flowing down the streets of North Avenue in the fall of 2012, I was not surprised. There was a time when a person could get a drink of clean water from the Jones Falls River: the river that flows beneath our cars as we rush to get to the next place we need to be to make more money to buy more things to acquire more debt. I felt inspired to record this happening: the moment when the water that ran through an old piping system exploded.

There are countless Water Goddesses that exist in many different cosmologies. From Celtic to Yoruba to Inuit, to Chinese, all of these cosmologies have some iteration of a water goddess. Because of the speed and industry that is an integral part of contemporary culture, these Goddesses are forgotten. Water Main Goddess is the beginning of an offering: a requiem to these forgotten Water Goddesses.

Renewal: a word we often use but rarely consider. This mixed media sculpture was the culmination of the work made during an artist residency at Nes in Skagaströnd, Iceland. The fabric that was used were the scraps from a small business that produced custom-made uniforms in the region. When I arrived, they had just completed nurse uniforms, and that left me with bags of white scraps that I hand painted. The paintings were a reflection of the natural elements that are in abundance in the countryside: water, wind, and horses. In this way, these pieces of fabric gained a second life, and third life, renewed with the paint, and transformed into a sculptural form that stood outside for 48 hours.

This Bridge Called My Back or the never ending labor of creating space to move past the isms
is a durational performance and installation that examines the intersections of oppression. For a period of 4 hours, the artist copies down text from the book “100 Years of Lynchings” while recorded footage found online of police brutality is projected on a loop. The artist deconstructs this intergenerational trauma through movement throughout the installation that consists of hand painted fabric, projection, two chairs, paper, and one charcoal stick.

i/you/us/we/black/or where is the love?

i/you/us/we/black/or where is the love? will examine the surface level of interpersonal relationships and psychic experiences of race as it relates to expressions of feelings on the
internet. For this performance, I will move through the space, with my neck tied by a rope
constructed out of newspaper. The action of lynching is deconstructed and reconstructed outside of the context of the antebellum and jim crow american south. This work is an examination of trauma enacted on black bodies in the past, and a ritual for transcending these traumas through movement with an intention placed on the expression of love. An assemblage of text from online social networks that deconstruct or reconstruct the notion of the black self in relationship to black love will be read.

ECHOES FROM CITY LAND ON TURTLE ISLAND. She said this day will come why not listen/ or / her heart exploded at the sound of soldiers footsteps performing colonialism / and why do the same thing over and over again and they declared america is not crazy

Echoes from city land... is a three channel immersive video installation and performance. Each video follows a dramatic arc of the past, present and future. Footage was found using the Maryland Historical Society, The Schomburg Center for Research in Black Culture, The National Library of Congress, the Enoch Pratt Public Library, and internet footage. Three videos projected into the space each represent a different representation of the passing of time in Baltimore City. The first is a montage of the architecture of this intersection and surrounding neighborhoods over time. The second is a montage of images of black americans in the Baltimore region from european colonalism in 17th century to present. And the final video is a montage of from the 1968 riots that ends with found video of contemporary police violence in cities throughout the United States. In the same way that history textbooks, popular culture, and personal narratives skew the perspective of historical facts, these found materials are dramatically altered through video editing. This immersive installation will be the backdrop for a live performance that will take place in the gallery opening night. The gallery performance is the first of two performance events that will continue to explore spatial, economic, and ecological inequities, as well as state and interpersonal violence.

made possible by Light City Neighborhood Lights and Station North

North Star Dreams was a temporary public sculptural-performance-installation that ruminates on the one year anniversary since the death of Freddie Gray while in police custody and the subsequent city-wide uprising that followed. From the plantation, to the penitentiary, state violence on disenfranchised people is not a new form in American society. North Star Dreams is a meditation on the concept of freedom and slavery in a country founded on the ideals of a just democracy. Patterns and colors associated with the quilts that tell the story of the path to freedom were etched and painted into the transparent structure. The work is a reflection of the spaces of liberation that are an integral component to mental, physical, and psychic survival. The accompanying sound performance was a remix of conversations about freedom, and ways to develop inner light in the face of so many oppressive societal forces.

Smile I
This work was created in response to unrest that was happening in The United States while I was abroad on an artist residency in Iceland. At the time, the Ferguson uprising was happening, I was asked to participate in a curated project called Black Joy. The group show as curated by a cultural organizer in Ohio who wanted to examine the concept of black joy in the face of generations of inter-sectional oppression.

#USA!
When Puerto RIcan delegate Zoraida Fonalledas stepped on the stage at the RNC in Florida, she was confronted with jeers by her Republican peers. This montage is based on google video users search of "america" and "puerto rico" at the same time.

BaltimoreDanceDance
The way that we frame our world can be correlated to the words we tag to the content we place in the public domain of the internet. The way we frame our world can also be correlated to the content we view in the public domain on the internet. The way we use the internet is the way we frame the world. The internet has become such a strong element in the world of media production and consumption. Online communities reflect offline communities and vice versa.

All of the video footage in this piece was found on the internet. In this way, this video is a collaboration with the users of the internet community who choose to upload moving images and sounds. The use of google search engine optimization is how I selected what images to use as a layer on the canvas of this video.

Based on Images and video that are a reflection of a google search of the term "Baltimore" this video is a reflection of the collective consciousness of internet users correlation to the term Baltimore.

Contemporary images and sounds of "The Wire" are juxtaposed with images and sounds of the "Classic Baltimore" dance that was popular during one period of Baltimore's economic vibrancy where wealthy manufacturers were thriving. The images collected by a person driving their car around various streets of the city, mostly in silence, were also used to ground the montage in a reality that stands apart from the popularity of these two cultural references on polar opposites of the spectrum of economic representation.

#Africa!?
An amalgamation of internet users in the United States perception of the word "Africa." Music by Chief Boima. Video Run Time 1 minute.