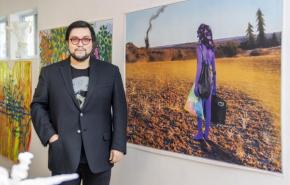 Alien Nation is a performance by Hoesy Corona that ruminates on the impending plight of climate immigrants globally. Twenty-three costumed performers will traverse the Hirshhorn Museum’s 2nd floor rotunda windows and embark viewers on a mysterious and evocative visual journey.

Alien Nation is part of Corona’s ongoing series The Nobodies (2009-Present), where the artist explores what it means to be a disenfranchised member of society in North America by embodying the abstract concept of nobody.

Corona makes colorful sculptural garments fitted to the human body that create other-worldly experiences for the viewer. The artist revels in the simultaneous visibility and invisibility that the garments bring to the wearer. In these performances audience members are invited to play a part in the act of nobodying, an operation that consists of making somebody, nobody. Nothing all of a sudden becomes individualized, becomes body and eyes becomes no one.

The Nicholson Project is proud to present WAYFARING, a solo exhibition by Hoesy Corona. On view from January 20th through March 12th, 2022, the exhibition will debut new large-scale prints on fabric and a series of mixed media sculptures created during the artist’s residency at The Nicholson Project in 2021. In WAYFARING the audience plays the role of voyeur to unidentified people as they struggle and make their way over, across, and through desolate and imagined environments occupied by lone figures wearing colorful bodysuits, carrying suitcases, and in forward motion. The lone figures are seen crossing both natural and man-made borders against impending waterways, cliffs, edges, and walls that allude to the possibility of an unspecified threat.

WAYFARING considers the artificiality of man-made borders and the need to reconsider how we relate to the earth in the face of manmade natural disasters. The sculptural works are part of a new series entitled The Plant People, a fictitious group of otherworldly humans who see themselves as stewards of the earth. The textile works are part of the series Climate Immigrants (2017-present)— an ongoing performance that expands upon issues of immigration by implicating everyone and not just a select group, addressing one of the most pressing topics of our time: climate-triggered immigration in relation to US-centric xenophobia. WAYFARING continues the artist’s interest in fabulating and remixing mythologies to protest our waged war on nature.

This exhibition is a companion to Corona’s exhibition Weathering, on view at The Kreeger Museum from December 2021 through March 2022.

Corona is a Queer, Latinx artist, who has been exploring climate migration and refugees in his work over the last decade.

The intricately overlayed ponchos are cut from industrial, weatherproof vinyl and finished with leather cording woven through the edges. Their colorful scenes depict mothers and other travelers on their journeys. The ponchos have evolved from wearable sculpture and costume ephemera as part of Corona’s performances, into archival art pieces to display as an invocation for hope and protection.They are reminders of the precarious and sometimes perilous idea of home and belonging. Each poncho is a wish and a prayer for safety and flourishing.

Hoesy Corona’s work highlights the complex relationship between humans and the environment by focusing on our changing climate and its impact on habitation and migration patterns. Using the archetype of the traveler, who is seen holding suitcases and voyaging through a wide array of landscapes towards a better place, Corona tackles the reality of the human aspect of climate change while celebrating the lushness and vibrancy of flora, bodies of water, and geographic forms, and bringing attention to the multitudinous powers of nature.

The artist has transformed the Museum’s Saul Atrium Gallery by creating site-specific vignettes that each picture a character journeying from a land made uninhabitable by global warming. The immersive, large-scale installation also features Corona’s Climate Ponchos, which double as wearable sculptures: while their form recalls a simple rain poncho, the dynamic patterns on them tell stories of migration and history.

Weathering is an installation that brings together a collection of Climate Ponchos– wearable sculptures used in the ongoing performance series Climate Immigrants (2017-present). In it the performers wear Climate Ponchos adorned with images that depict various archetypal travelers. The series expands upon issues of immigration by implicating everyone and not just a select group, addressing one of the most pressing topics of our time: climate-triggered immigration in relation to US-centric xenophobia. The Climate Ponchos are paired with a new series of sculpted heads entitled The Plant People (2021), a mixed media sculptural series utilizing familiar objects with unique handmade elements to depict the blooming heads of The Plant People, a fictional group of cultural influencers who see themselves as stewards of the earth. Weathering considers the plight of climate induced global migration and its effects on people of color and the population at large. In Weathering the artist utilizes pervasive and harmful materials currently in heavy circulation across the world in the form of fossil fuel derived plastics not unlike those found in our quotidian lives including in our homes, plumbing, bank cards, food containers, clothing, and even photographic records. Weathering warns us of idly waiting out the storm as we continue to be worn down by long exposure to the atmosphere. The works on view highlight the artist’s interest in fabulating and remixing mythologies to protest our waged war on nature.

My ongoing series “CLIMATE-IMMIGRANTS" (2017-Present) is an ongoing performance and multimedia site specific installation that considers the impending plight of climate induced migration worldwide and its effects on people of color. The performers wear 'Climate-Ponchos' which feature vinyl cutouts depicting silhouettes of traveling immigrants against colorful floral backgrounds.

Previous iterations have been presented at the Smithsonian Hirshhorn Museum and Sculpture Garden, Corcoran Gallery of Art, Athens School of Fine Arts, Siren Arts, and the Smithsonian Arts and Industries Building.

For this project I wanted to do something of a global scale that implicated a broad audience and included as many people as possible. I conceived of the idea of climate-induced migration as a very real issue of our time that needs to be voiced. The performers will wear what I call “climate ponchos,” which includes head gear that obscures the performers faces, an approach I chose because of the mystery and anonymity it affords. Always silent, these figures will roam about the installation site and in various locations create repetitive sculptural forms and movements for attendees. Additional elements of sound and video will help to contextualize the experience for viewers.

The clear wearable climate ponchos are adorned with images that depict the archetype of the “traveler,” with the people depicted wearing backpacks, carrying suitcases, wearing hats and some holding children. They are all on their way somewhere, in one direction a lot of the times. This simple showing of people in movement, in transition, resonates with a world-wide issue and will echo the reality of the viewers as they themselves traverse space to witness the performance.

I enjoy the ambiguity of the words “Climate Immigrant” and “climate Ponchos” as they evoke both natural and political notions.

"In my ongoing series "White Constructions" I’ve been exploring notions around the calculated construction of race as it pertains to US-centric power structures.This series explores the deliberate construction of race in North America and the strategic placement of white identities as superior to the rest. In White Constructions I limit my materials to the word 'white' cut from vinyl on a clear surface (clear film, glass, plastic). My hope is that these constructions encourage a timely conversation around the social construct of race and the negative implications within it for people of color."

Mother Death Life Mama, 2012-present is a short performance that considers human mortality through the use of otherworldy wearable sculptures and soundscapes. Performed at the Baltimore Museum of Art as part of the Contemporary Wing reopening celebration.

SCAPEGOATS (2012-Present) is a meditative and poetic sculptural exploration of the indoctrination into societal othering as a form of devoted practice. In it, the deity is the Scapegoat, a figurative representation of blame and shame as internalized acts and subconscious thought processes that sacrifice individuals within a community for their queer existences. In this series the herd is shown relaxed in a safe environment that re-envisions a triumphant ending for the social castaways.