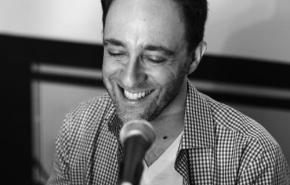 The music of composer and pianist Judah Adashi is guided by a belief that the creation and performance of new music can bear witness to injustice, create space for empathy, and serve as a call to action. Dr. Adashi’s compositions are grounded in the classical tradition and imbued with soul and pop influences ranging from Nina Simone to Björk. Tim Smith of The Baltimore Sun has written: “it’s not easy to straddle genres; Adashi does so with naturalness and expressive impact.” His piece my heart... more
View Judah's Resume

Whenever someone is killed by violence in Baltimore City, an organization called Baltimore Ceasefire invites people to gather at the site of the murder for a Sacred Space Ritual. Led by Ceasefire co-founder Erricka Bridgeford, these are not vigils, but “a way to put love & light into the place where our Sister was taken by violence…to make it sacred ground.” Love into Concrete is my musical response to the experience of a Sacred Space Ritual. The title was inspired by Bridgeford, who describes the communal act as "pouring love into the murder spot" or "pour[ing] light into the concrete."

Love into Concrete was commissioned by Lior Willinger, with support from the Presser Foundation. The work is dedicated to Erricka Bridgeford and Baltimore Ceasefire.

Invocation: Dear Baltimore combines the opening music from Judah Adashi's Rise -- a piece about America's civil rights journey from Selma to Ferguson -- with a love letter to Baltimore by Erricka Bridgeford. Bridgeford is one of the co-founders of Baltimore Ceasefire, an organization committed to reducing the murder rate in Baltimore.

Invocation: Dear Baltimore was premiered at Rise Bmore 2018 on April 19, 2018, and released on Bandcamp the same day, with all proceeds going Baltimore Ceasefire. The track was named Best Song in Baltimore Magazine’s 2018 Best of Baltimore issue.

“With music by Rise Bmore’s Judah Adashi and words by Baltimore Ceasefire’s Erricka Bridgeford, this breathtaking ballad is a love letter to our city, using a few pounding simple keys and sincere words to poignantly capture its heartache but, more importantly, its hope.” -Baltimore Magazine

Beginning in August 2016, then-San Francisco 49ers quarterback Colin Kaepernick engaged in a silent, peaceful protest by sitting or kneeling during the pre-game performance of The Star-Spangled Banner. When asked about his motivations, Kaepernick replied: “I am not going to show pride in a flag for a country that oppresses black people and people of color...there are bodies in the street and people getting paid leave and getting away with murder.” A free agent since the end of the 2016 season, Kaepernick has not been signed by another NFL team. In response, other players and fans have taken up his cause, by kneeling during the anthem, and by boycotting the league.

Tariq Touré’s poem “Colin Kaepernick: For the Love of the Game” highlights the disposability of Black athletes who speak out against injustice. No Refuge – originally conceived as part of a larger composition about Baltimore, where the text of The Star-Spangled Banner was written in 1814 – is a wordless reimagining of our national anthem, titled for a line in the lesser-known third verse of Francis Scott Key’s poem: “no refuge could save the hireling and slave / from the terror of flight, or the gloom of the grave.”

No Refuge: for the Love of The Game was released on Bandcamp on February 4, 2018 (Super Bowl Sunday), with all proceeds going to Know Your Rights Camp. This free campaign for youth, fully funded by Colin Kaepernick, is designed to raise awareness about higher education, self-empowerment, and how to interact with law enforcement in various scenarios.

In 2010, 16-year-old Kalief Browder was accused of stealing a backpack. Unable to post bail, he was held on Rikers Island without trial for three years, spending two of them in solitary confinement. Browder committed suicide in 2015, two years after his release.

Last Words imagines Browder's final hours, on the night of June 5, 2015. The text comes from a conversation that Browder’s mother, Venida, shared with Jennifer Gonnerman of The New Yorker. Gonnerman writes: “his mother explained that the night before [he took his own life], he told her, ‘Ma, I can’t take it anymore.’”

Venida Browder fought relentlessly for her son’s release, and, after his suicide, shared his story in support of criminal justice reform. She died of heart failure in October 2016 at the age of 63. Last Words is dedicated to her memory.

(Audio of Venida Browder courtesy of The Marshall Project; photos by Zach Gross.)

The Beauty of the Protest was inspired by the work of photographer Devin Allen. In striking black & white images on Instagram, Allen told the story of the 2015 Baltimore Uprising as only a local artist could, offering a necessary counterbalance to the often one-dimensional narrative presented by the national media. My title comes from Allen’s words in a New York Times interview: "I wanted people to see the beauty of the protest."

"In an interview, Allen spoke of his desire for 'people to see the beauty of the protest.' Adashi provides a way for people to hear it. The score, which calls on the cellist to do some singing while playing, suggests a solemn incantation, launched by an opening theme with a rise-and-fall motion, and fueled by reiterative harmonic patterns. The textually spare vocal part adds a haunting touch." -Tim Smith, The Baltimore Sun

Rise, a collaboration with the poet Tameka Cage Conley, bears witness to civil rights in America at a fraught moment in our history. A 40-minute reflection on the journey from Selma to Ferguson and beyond, the work is at once a celebration and a reckoning, the Civil Rights Movement of the 20th century refracted through the unimaginable triumphs and horrors – the election of the first African-American president, juxtaposed with the deaths of young black men at the hands of law enforcement officers – of the 21st.

"It’s not easy to straddle genres; Adashi does so with naturalness and expressive impact." -Tim Smith, The Baltimore Sun

my heart comes undone is a meditation on patience and longing, inspired by the work of Björk (the title and musical point of departure come from her song “Unravel”) and Arvo Pärt. The score includes an epigraph by Rainer Maria Rilke, translated by Stephen Mitchell: "We don't accomplish our love in a single year / as the flowers do."

The piece was conceived with three possible scorings in mind – solo cello with loop pedal, solo cello and strings, or string quartet – but can be performed in a variety of blended instrumental or vocal combinations, in greater numbers, and with or without amplification, effects, lighting and movement.

my heart comes undone was commissioned by the Peabody Institute of the Johns Hopkins University, specifically by the Preparatory String Department's Pre-Conservatory Violin Program. The work is dedicated to Lavena Johanson, who premiered the cello and loop pedal version on a concert presented by the Evolution Contemporary Music Series and Classical Revolution Baltimore at The Bun Shop in April 2014.

my heart comes undone was released on Bandcamp in September 2014, with all proceeds going towards equipment and supplies for student cellists in the Baltimore Symphony Orchestra's OrchKids program.

"Judah Adashi listened to 'Unravel' & heard a new song inside it." -Björk, via Twitter

"An impassioned soliloquy." -Will Robin, Bandcamp

I first encountered the poetry of Ciara Shuttleworth in The New Yorker, in November 2010. Her poem "Sestina" made an immediate impression on me, with its simplicity and depth of feeling. Ciara reimagines the traditional form f­or which her poem is named, compressing it – and the entire life cycle of a relationship – into six words, variously rotated. Sestina is at once intimate and epic; I tried to reflect that sensibility in this spare musical setting for voice and orchestra.

I am immensely grateful to the American Composers Orchestra (especially Artistic Director Derek Bermel and Music Director & Conductor George Manahan) for making Sestina part of the 2015 SONiC Festival, and to my friend Caroline Shaw for singing it. Caroline and the ACO premiered Sestina in Zankel Hall at Carnegie Hall on October 23, 2015.

Nina is my tribute to the great singer, songwriter, pianist and civil rights activist Nina Simone (1933-2003). The piece begins with a tombeau in memory of Simone, followed by my own versions of two traditional folk songs that she recorded. Sharing a personal interpretation of this music is my way of invoking and honoring The High Priestess of Soul.

Nina was commissioned by York College of Pennsylvania to mark the dedication of its new Steinway. The work is warmly dedicated to the two pianists who premiered it: Gretchen Dekker, and my longtime friend Ken Osowski.

Grace was composed in memory of the late rock musician Jeff Buckley (1966-1997), with his haunting, ethereal voice and singular musical sensibilities in mind. His songs speak with an elegant simplicity worthy of the title of his 1994 album "Grace," the only full-length release that he completed prior to his untimely death-by-drowning in the Mississippi River.

As the title of this composition, "grace" is not indicative of a divine presence, but rather of an earthly beauty captured so eloquently by Buckley’s music, or more broadly, of what the literary critic George Steiner identified in his book Language and Silence as "the quick of the human spirit." The score bears the following epigraph, by Pablo Neruda (as translated by W.S. Merwin): "Your memory emerges from the night around me. / The river mingles its stubborn lament with the sea."

Grace was selected by David Zinman, music director of the Aspen Music Festival, to receive the 2002 Jacob Druckman Award for Orchestral Composition. The work was also recognized with a 2003 ASCAP Foundation Morton Gould Young Composer Award.