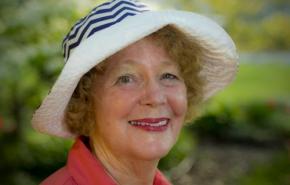 The Theatrical Mining Company has produced two of Susan Middaugh's full length plays,  A Modern Pas De Deux and Black Widows as part of the Baltimore Playwrights Festival. Lazy Bee Scripts has published two of her short plays, A Table for Two and Just a Bus Driver.  Fifteen of her short plays have had productions by 26 theaters in the United States, Canada and England. The theaters, most but not all of them community theaters, include Single Carrot, SourceTheatre, Stone Soup, Arena Players... more
View Susan's Resume

You can read the script in the text file attached. Here is a synopsis of my full-length play, Black Widows:

This is a cautionary tale about two Los Angeles women in their 70s who are crooks. The play opens as Vera Krabitz and Gwen Halsted are stealing cash and credit cards from hotel locker rooms. Gwen is afraid of getting caught and suggests they come up with a new scam. Shortly thereafter, Vera and Gwen befriend a couple of homeless men they meet through a church soup kitchen. They give the men a place to live, take out multiple life insurance policies on them and name themselves as beneficiaries, then wait for the men to die. Until one day, Vera becomes impatient.
With doubling, the cast may be reduced to six: 3m, 3w.

Queen for a Day

In an auction Holly wins a butler for a day. He starts to serve her breakfast in bed -- until the action veers off in an unexpected direction.

Connie, a suburban woman, gets picked up for the first time for drug possession. Sharing a room with her at the jail intake center is a prostitute named Crystal. Each woman wants to get out on bail, but only one will. Except for their addiction and a fondness for the same pair of shoes, they appear to be very different. Will they find their common humanity?

A middle-aged woman is having a hard time getting a table for one in a crowded restaurant on a Saturday night. While she waits patiently in the queue, a series of couples behind her in line get a table before she does. Frustrated, she resorts to drastic measures.

An elderly couple are awakened in the middle of the night by their next-door neighbors who are having an argument. The wife becomes intrigued, the husband wants to distract her from listening. This 10-minute play has two characters: 1m, 1f and a simple set.

A woman writer is working in her office late at night. An Intruder knocks on her door and insists that she open the door. This man proceeds to terrorize her and accuses her of killing his sister in a hit-and-run accident.

Set requirements: a desk, a door, and a few simple office props

Hooked: Anybody's Child, a docu-drama, tells the true stories of men and women affected by the substance abuse crisis. Ranging in age from 20s to 70s, they include those who were addicted and are now in recovery, others who overdosed and died, and the parents of those who struggled with them. Each of these short scenes, called "glimpses," is based on personal interviews that I did in 2018 in cities and suburbs in Maryland: Parkton, Ellicott City, Columbia, Roland Park and other parts of Baltimore, Lanham, Silver Spring, Easton, Catonsville. But they could take place anywhere in the U.S.

Two devoted spouses of dementia patients strike up an unlikely friendship after they discover what's been going on at their spouse's assisted living facility. A 10-minute play with 2 characters: 1m, 1w.

Does Your Dick Work?

Although the desire for romance may be universal, Jack Durso, a 28 year old computer geek, has a more difficult time than most men his age. Jack has cerebral palsy, limited use of one hand, is subject to spasms and uses a wheelchair. But he's determined to succeed even if he has to hire a call girl and a sexual surrogate to gain experience and confidence. Throughout, Max, his personal care attendant and an amateur boxer, is in his corner. A full length play.