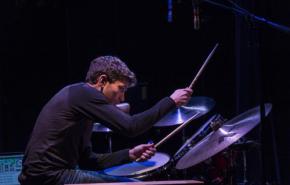 Baltimore-based percussionist and performer Adam Rosenblatt has a penchant for finding interesting and uncommon ways to present and perform contemporary music. He has a keen interest for growing an interdisciplinary performance practice, believing that a mix of media and art forms can speak more directly and powerfully to our current modern context. Adam frequently performs with the Ictus Ensemble in Brussels, Belgium, and is a founding member of QuaQuaQua, a new percussion trio which focuses on the... more
View Adam's Resume

Godly Chaos is my first full length performance production. It is essentially a theatrical concert. I chose pieces of contemporary music that spoke either directly or indirectly to ideas of free will and determinism, and then I added staging, lighting design, projections, and other theatrical elements. The result is that each piece of music is a bit like a scene in a play, with the play having an overall theme or aesthetic idea instead of a narrative story line.

Godly Chaos premiered at the Baltimore Theatre Project in April of 2017, performed by QuaQuaQua and Jonny Allen. I then created a shorter solo version of the program which I performed as part of the 6th Charm City Fringe Festival in November 2017.

GHOST NOTES was an interactive performance program for young audiences developed by the Ictus Ensemble in Brussels, Belgium in 2016. I was one of four performers in the program, and worked collaboratively with the artistic director of Ictus to develop the program. We toured GHOST NOTES to Brussels, Bruges, and Lille.

The program comprised different pieces of contemporary music, all with added choreography or gesture in some way.
I performed "Laplace Tiger" by Alexander Schubert. This piece was a solo for drumset, motion sensors, and electronics. I extended the piece to include an interactive game at the beginning and interactions with the audience throughout the piece.

Sound and Body was an interactive performance program for young audiences developed by the Ictus Ensemble in Brussels, Belgium for the 2013-14 concert season. I was one of six performers in the program, and worked collaboratively with the artistic director of Ictus to develop the program. We performed Sound and Body more than a dozen times mostly at various "Big Bang Festivals" around Europe, including performances in Brussels, Athens, Gent, and Lille.

The program comprised pieces of contemporary music which were all theatrical or used non-traditional instruments in some way. The works were:
"Home Work" by François Sarhan - A theatrical body percussion solo involving an interactive call and response game at the beginning
"Musique De Tables" by Thierry De Mey - A piece for three pairs of hands on amplified table tops
"i funerali dell'anarchico serantini" by Francesco Filidei - A piece for six performers seated at a long table
"Music for Pieces of Wood" by Steve Reich - A piece for five performers on 5 pairs of claves

Ballet Mekanique was an interactive performance program for young audiences developed by the Ictus Ensemble in Brussels, Belgium for the 2014-15 concert season. I was one of six performers in the program, and worked collaboratively with the artistic director of Ictus to develop the program. We performed Ballet Mekanique more than a dozen times mostly at various "Big Bang Festivals" around Europe, including performances in Brussels, Lisbon, Antwerp, Gent, and Lille.

The program comprised pieces of contemporary music, including:
"No Music for EARchestra" by David Helbich - An interactive performance where the audience is guided by a leader to manipulate sounds coming into their ears using only their hands in different ways.

"Aphasia" by Mark Applebaum - A solo piece for hand gestures synchronized to a tape track. For Ballet Mekanique, this became a duo with me and a dancer. We kept the original hand gestures, but collaboratively developed another layer of choreography to the piece.

"I Funerali dell'anarchico Acciarito" by Mauro Lanza - A piece for six performers using a host of noise makers and experimental instruments developed in the 1920s.

"Letter Piece No. 1" by Matthew Shlomowitz - For this piece, the composer gives the structure, but the performers must choose the content that goes in that structure. For one half of the content, we used some of the gestures from "Aphasia" and for the other half, nonsense words taken from "Sonate in Urlauten" by Kurt Schwitters. This content was first taught to the audience by the performers, then everyone performed the piece together using a scrolling score that was projected.

More information at: https://www.ictus.be/mecanik
TV spot on one of the performances in Brussels (in Dutch): https://www.ketnet.be/karrewiet/24-oktober-2014-ballet-mekanique