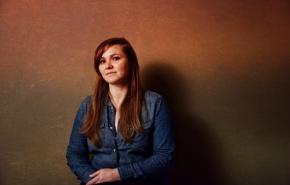 Letitia VanSant’s lyrics are as personal as they are political, tracing questions of power into the human heart. With sparse indie folk arrangements fortifying a distinctly intimate vocal style, her down-to-earth stage presence has been described as vibrant and approachable.   Paste Magazine named her among 10 Artists to Watch in 2020, BBC Radio says she is “a fascinating new artist,” and PopMatters called her “a consummate reflection of a rising Americana star.” Her songwriting has earned... more
See 2021 $2,500 Baker Artist Award Winning Portfolio
View Letitia's Resume

Circadian rhythms are the natural cycles occurring within a period of wakefulness and sleep, of light and darkness. Across the nine-song spectrum of Circadian, the newest full-length collection by singer-songwriter Letitia VanSant, her luminous voice mirrors the rich emotional quotient of her themes, breathing life into songs that balance contemplative compassion with righteous fury.

VanSant’s debut album Gut It to the Studs established her as an emerging talent on the Americana scene and propelled her onto her first UK/European tour, where she was met with enthusiasm by audiences and critics alike. PopMatters defined her as “…a consummate reflection of a rising Americana star” and BBC Radio calls her “a fascinating new artist.” Among her additional accolades she was named a winner of the Kerrville New Folk Songwriting Competition.

“My last album introduced me to the world of songwriters. I gained a greater respect for the craft, but more importantly I learned a reverence for the creative force that moves through art. I stopped trying to ‘steer’ and rather tried to do greater justice to the songs that force their way out of me.”

“I fussed a lot about making my last recordings painstakingly perfect, but this time I just wanted the songs to speak for themselves. My motto for this recording process was ‘if the groove is good, you can’t go wrong.’”

This approach was a perfect fit for Hubbard, who encourages his artists to trust their first instincts. He assembled an all-star cast of session players including Will Kimbrough, Michael Rinne (Miranda Lambert), and Juan Solorzano. Hubbard sat in on drums. They holed up with engineer Dylan Alldredge at Skinny Elephant, the studio that Hubbard created out of an old garage. Harmony vocals were later added by her friends Mia Rose Lynn and long-time collaborator David McKindley-Ward.

She went in with the intention of recording a 2-song EP, but the chemistry with the musicians was so immediate that she came out at the end of the week with a 9-song album. Many of the songs were recorded live with just 2 or 3 takes. Several of the vocals were lifted from scratch tracks--a bold move, as VanSant’s voice is what often first pulls people in. “I just figured that people are going to either like my singing or they’re not, and splicing and dicing to get the perfect take would probably hurt more than it helped.”

The result is an album that feels as natural as it is compelling and beautiful. “Every song is a small, glittering jewel” said Thorben Bull of the Kieler Nachrichten during her recent European tour, “A taste that melts on the tongue like liquid caramel.”

The set kicks off with the incendiary “You Can’t Put My Fire Out.” “I am a survivor of sexual violence from years ago. It impacted my self-esteem and what I felt like I was capable of in the world. I felt a lot smaller. This song came out of reclaiming my narrative and sense of self worth,” she explains.

It’s no mistake that she follows up with “Tin Man,” a subtle character study that explores how our culture’s stoic notions of masculinity leave many men emotionally isolated, particularly as they age.  She wrote it after hearing the podcast “The Lonely American Man” by NPR’s The Hidden Brain. “It rang so true that I had to pull over my car because I was crying so hard. Our culture makes it very difficult for men to be emotionally vulnerable, and that in turn makes it hard for them to connect with others. I don’t know what it’s like to be a man, but I know what it is to be a person who loves one and wants to connect.””

The sadness of growing older is a thread that runs throughout the record. “Most of Our Dreams Don’t Come True” conveys the disappointment that she and many of her friends were experiencing as pregnancies became miscarriages, acting careers fizzled, and things just didn’t work out the way they’d all hoped. “My generation has gotten so much messaging to reach for the stars and keep trying at all costs. But I think that notion can be taken to a desperate, unhealthy extremes that can leave people profoundly unhappy. There’s a time to let things shift, let things go. Allowing ourselves to grieve old dreams can make space to discover new ones.”

The title track “Circadian” was inspired by an article about light pollution; how fireflies are having trouble finding mates, and migrating birds can’t find their way. “The solution is to turn out some of the lights,” she says. “The challenges of the world feel big and complicated, but I take solace in the idea that some of the answers are to make things simpler.”

“Something Real” was inspired by an experience at Kerrville Folk Festival, where many were mourning the recent death of Jimmy LaFave. “ I never met him, but hearing people sing his songs around the campfire, it was clear that his energy was still moving through the world. I had this moment when my clouds of cynicism parted, and I was overcome with awe.”

The collection concludes with the cataclysmic “Rising Tide,” based on Letitia’s father’s experience as a Vietnam veteran with cancer caused by exposure to Agent Orange. “They’ve got plans for our pockets, cigarettes for our lungs/Poison for our babies and bullets for our guns.” She recorded the song several years ago with an old band called the Bonafides, and it was a hit on the local radio station 89.7 WTMD where listeners voted it among the top 10 songs of the year. Her dad has since recovered, but Hubbard’s production has given the song a second wind that is both harrowing and timely.

The ambition of these themes comes as no surprise to those who know her personally, as VanSant is deeply spiritual, and social justice has been a touchstone of her life. After spending six years at a progressive lobby group in Washington, DC, she made the jump to a career in music, but remains engaged in local activism in her hometown of Baltimore, Maryland.

While political and philosophical motifs are present on Circadian, strident proclamations are not. “I’m challenged,” Letitia confirms. “I’ve written lots of songs about social justice, but I don’t end up sharing the vast majority them because they just don’t feel right for one reason or another. I don’t want to write preachy songs when I have so much to learn and improve upon as a person, and in many ways I occupy a position of privilege. What I have to share is my failures, my questions, and my journey of trying to do better.”

Circadian bears the mark of an artist who has honed her skills to sculpt brave songs of impressive accuracy, vitality, and relevance. As a songwriter, Letitia VanSant utilizes exacting imagery as she details a crawlspace under the stairs; stubborn roots of English ivy vines; boxed wine and stories over candle-lit card games. “I have a lot of respect for classic country songwriters who have a point that’s really focused,” she explains. “They dig deep down and express it with just a few words. I aspire to be understood from the song itself. It’s a miracle that we’re on this planet and alive, and can vibrate the world with music. I want to share these moments of gratitude.”

Gut It to the Studs

VanSant’s national debut Gut It To The Studs opens in tandem with her life as an artist. To get off of the beaten path, though, one must contend with the uncertainties of uncharted territory. “Where I’m Bound” shows the importance of persevering through a “land of broken promises and streets of fool’s gold” with a “map in the stars,” and by following faith.

With this shift, VanSant left behind a nonprofit career. In an effort to feel comfortable in her new skin, she looked at her emerging life and had to “Gut It To The Studs.” She sings, “gotta get the wires a-running right ‘fore the dry wall goes back up." “Taking Back The Reigns” reflects the notion that insecurities will follow you wherever you roam. In order to face your demons and not allow them to swallow up your life, you have to encounter the forces unseen and look them in the eye. If you let fear drive your soul, “then left unchecked it will rule the whole world.” “Dandelion” echoes our generation’s keen interest in building communities that are nourishing and real.

On “The Field,” VanSant likens her inner journey to the labor of farming, as she sings, “I’ll pick up my plough and I’ll pick up my hoe, for the soil is rocky and dry.”

The sole cover on the album, “For What It’s Worth,” stands the test of time as a true protest anthem. VanSant churns out a powerful Americana interpretation inspired by recent protests against police brutality. She comments, “We owe so much to the people who fought for justice in decades past, particularly in the ‘60s when this song was first released. I recorded this song as a reminder to myself that the present moment is just as critically important to our nation’s history.”

The song "Sundown Town" is an account of her reckoning that perceptions of safety reinforce historical patterns of segregation.

When you return to a garage to pick up your car after repairs, you are handed a bill for “parts and labor.” The “parts” are things like spark plugs and oil-drain pans, while “labor” is the hours spent by the mechanics. But you seldom see the mechanics at work, so it's tempting to think of the gadgets and workers as interchangeable cogs in the great machine that keeps society running.

“Parts & Labor,” the new album from Letitia VanSant & the Bonafides, fights that temptation with all the considerable skill and passion the folk-rock band's four members can muster. The ten original songs work hard to proclaim that we are all much more than parts and labor to the machine of our economy.

They do so not only through the lyrics’ evocative dramas but also through the give-and-take between traditional acoustic instruments and their buzzing electric successors. Out of that negotiation emerge striking melodies, and when those tunes blossom into four-part harmonies, it’s as if a solitary voice has become a community.

VanSant debuted the album at the Creative Alliance in an inspiring collaboration with Potluck Storytelling, in which a diverse group of Baltimoreans shared personal narratives on the theme.

“VanSant’s voice is the most striking aspect of the record,” the Baltimore City Paper wrote when the album was released in 2012. “It is part Iris DeMent with a little Dolly Parton (and maybe even some Rose Maddox) thrown in. But after repeated listens, the quality of her songwriting begins to come out. She’s a clever woman with a lot to say. She claims that much of her music is motivated by a cross-country bike ride she took as well as her Quaker beliefs, but you don’t have to be a biking Quaker catch the drift. And she doesn’t try to write like she’s living in Tennessee in 1933 either. The outstanding opener, “Macy’s Parking Lot,” makes the eponymous landscape sound as high and lonesome as the riverbank of any murder ballad.”