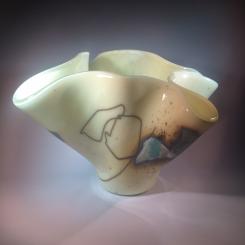 END_OF_DOCUMENT_TOKEN_TO_BE_REPLACED

Stacey Grabowski Phinney, resides in Baltimore, MD. She was born and raised in New Jersey. There, at the age of 12, she began her career in art, although she did not know it at the time. Stacey began private oil painting lessons one night a week for $5 a lesson. That investment paid off, since that is where she learned to appreciate color and texture along with great composition. These skills would become invaluable later in her fused glass designs. Stacey exhibited her artwork at numerous shows in and around New Jersey and New York, where she won several 1st place ribbons.
That success lead to a decision to go to Towson State University in Maryland to pursue a degree in art. Stacey later received a MA in Design from the University of Baltimore. Still always eager to learn, even after graduation, Stacey would take various art classes on weekends such as pottery and stained glass.
When she stumbled on a fused glass class, she decided to take that class since she had seen several fused glass pieces in Venezuela and Puerto Rico that peeked her interest while traveling. After that first class, Stacey decided that glass was the medium for her and she quickly bought her first kiln. The interaction between transparency and opacity and the different textures of fused glass influence Stacey’s designs.

Currently, Stacey exhibits her work in several galleries around Maryland, as well as at various art festivals throughout the year. 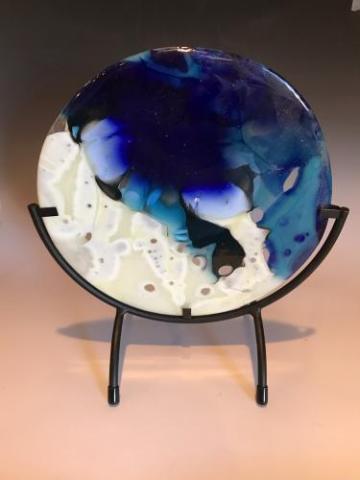