Described by the Baltimore Sun as having “a refined sense of melodic arcs and harmonic motion,” Peter Dayton’s compositions have been performed across North America and in Europe. With degrees in composition from Vanderbilt University (B.M.) and Peabody Conservatory (M.M.) Peter has received university, national, and international awards for his music.

Peter’s creative process often involves using visual art or poetry as the spark for an artistic response. His works responding to contemporary painters have generated friendships and connections across the globe, from England to Peru. Peter’s passion for literature has resulted in over a dozen settings of poems in art songs and choral works. In addition to his settings of modern American poets, Peter wrote the libretto for his own chamber opera May She | She May about the poet Gertrude Stein’s first love affair.

Ablaze Records has published a substantial portion of Peter’s output for large ensemble. His works appear on Volumes 2 and 3 of their Orchestral Masters series, on the inaugural CD of their Sinfonia series, and on Volumes 1 and 2 of their New Choral Voices series. These works include Peter’s From Sombre Lands, after a painting by John Hitchens, and selections from the ongoing An American Mass cycle of choral settings of modern American poetry.

An involved member of local, national, and international musical communities, Peter has studied in England and Sweden, taken part in festivals and conferences in Louisiana, Colorado, Pennsylvania, Wyoming, Italy, and Spain, organized concerts of his work in Ohio, Tennessee, and Maryland, and exhibited his music at the Violin Society of America, Chamber Music America, and American Choral Directors Association conventions. More information about Peter and his work is available at peterdaytonmusic.com 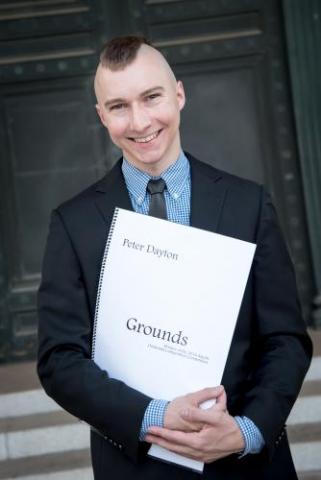