Mina Cheon is a new media artist, scholar, educator, and activist best known for her “Polipop” paintings inspired by Pop art and Social Realism. Cheon’s practice draws inspiration from the partition of the Korean peninsula, exemplified by her parallel body of work created under her North Korean alter ego, Kim Il Soon, in which she enlists a range of mediums including painting, sculpture, video, installation, and performance to deconstruct and reconcile the fraught history and ongoing coexistence between North and South Korea. She has exhibited internationally, including at the Busan Biennale (2018); Baltimore Museum of Art (2018); American University Museum at the Katzen Arts Center, Washington, DC (2014); Sungkok Art Museum, Seoul (2012); and Insa Art Space, Seoul (2005). Her work is in the collections of the Baltimore Museum of Art; Smith College Museum of Art, Northampton; and Seoul Museum of Art, Seoul. Currently, she is working on her participation for the inaugural Asia Society Triennial 2020-2021 in New York titled, “We Do Not Dream Alone.” Her digital interactive art piece, EatChocopieTogether.com for global peace, was launched on August 15, 2020 and will remain active for virtual participation as a lead up to the physical exhibition of Eat Chocopie Together at the end of the Triennial.

Mina Cheon is the author of Shamanism + Cyberspace (Atropos Press, Dresden and New York, 2009), contributor for ArtUS, Wolgan Misool, New York Arts Magazine, Artist Organized Art, and served on the Board of Directors of the New Media Caucus of the College Art Association, as well as an Associate Editor of the peer review academic journal Media-N. Reviews for Media-N include critical essays covering SeMA Mediacity Seoul Biennale 2016 and the Venice Biennale 2017. Awarded the 2010 Martin Luther King, Jr. Day and Unity Week Award for her efforts promoting cultural diversity within and beyond her college, she is a Full-time Professor at the Maryland Institute College of Art (MICA); was a visiting professor and lecturer at Ewha Womans University in Seoul, Korea where she teaches during the summers; and a mentor of Art-Uni-On, a global mentorship network by Hyundai Co. and the Seoul National University College of Fine Arts. Cheon received a BFA in painting from Ewha Womans University, Seoul, in 1996; an MFA in painting from the Maryland Institute College of Art in 1999; an MFA in imaging and digital art from the University of Maryland in 2002; and a PhD in philosophy of media and communications at the European Graduate School, Saas-Fee, Switzerland, in 2008.

Mina Cheon Studio is located in the K-Town Studios building in Little Korea of Baltimore, Maryland. 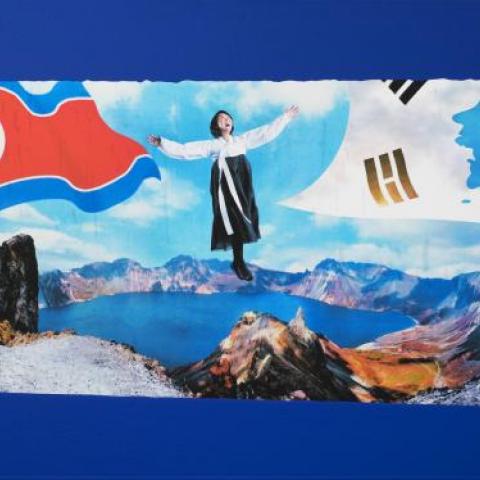