Mary Jo Tydlacka is a resident artist at the Howard County Center for the Arts. She was born and educated in the Chicago area and did her art studies at the University of Maryland, College Park, and at MICA. Collectors of her work include the Folger Shakespeare Library, Michael Kahn, founder of the Shakespeare Theatre in Washington, D. C., and Theresa Colvin, former Director of the Maryland State Arts Council. She participated in an 2 artist exchanges in Cergy-Pontoise, France.

STATEMENT
I spent my second year of college living among Rome’s ancient and Renaissance treasures. As a student at Loyola University’s Rome Center I was very taken with the city’s old buildings especially one in the neighborhood, a beautiful villa halfway up the mountain behind the school. Finally in the spring I went up there to visit Villa Madoma, a Renaissance villa, designed at least in part by Raphael. It has beautiful arched windows, fountains and terraced formal gardens. During that year I grew to love the art and architecture of Italy, and that influenced my decision to do artwork.
My artwork is my response to the world around me and it is also my participation in the world. Over the years my subjects have been homes, neighborhoods, families and cities. During the last several years I have focused on the outdoor Shakespeare plays at the Patapsco Female Institute Ruins and other locales. I attend the plays , multiple times if possible, and sketch. The plays are a combination of my interests in landscape, weather, classic architecture, groups of people and Shakespeare. 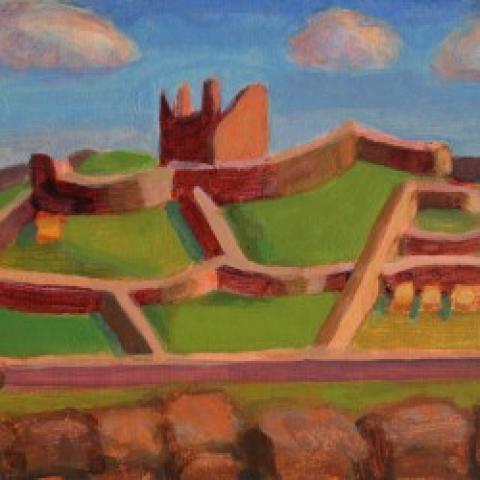