I am a storyteller, papercut artist, and puppeteer. I mainly make crankies, a form of visual art performance that involves a box containing a scroll of artwork. The scroll is attached to rods with cranks at the top. As the cranks are turned the scroll moves across the front of the box, where the viewer can see the artwork.

I'm a formally trained artist with a degree in sculpture from MICA, however over ten years ago I started my foray into puppetry after seeing some shadow puppet shows and began to encourage my friends to make shadow puppet shows at parties. After I started creating and performing crankies more seriously, I quickly learned the necessary techniques underlying papercutting, story telling, drawing, puppet making and manipulating. Most of my knowledge was learned though trial and error, practice, innovation and collaboration.  The more I've worked on crankies, the more I've gotten into telling personal stories, such as those of my father, the arabbers that work behind my house, and the childhood memories of a friend growing up as an African American child in East Baltimore. My community is an integral part of my work. Throughout my years performing crankies, I've learned how to tell these stories to foster the amazing experience that happens after a live performance (versus exhibiting art that hangs on a wall, for instance), where people come up and share things about themselves. I've learned to choose and tell stories that touched me and many are about real people. One of my great pleasures as a crankie artist is the opportunity it allows for local and distant collaborations. In 2019 I collaborated with Inuit Throat Singers, Nukariik, to tell a story of Sedna, an Inuit goddess of the sea. Closer to home, I worked with the Baltimore Arabbers who have a stable behind my house. Last year I made two crankies for Willow Garden Films for a Hazel Dickens Documentary telling the story of a Baltimore folk legend. I've also worked with many other local artist such as Caleb Stine, Wye Oak, Ellen Cherry, Anna and Elizabeth, D.C.'s Whit's End Puppets. In 2012, shortly after I started seriously papercutting, my papercut and shadow puppet work was exhibited at the Creative Alliance in Baltimore, MD. Shortly after, films of my crankies were selected to be a part of the 2014 Atlanta film festival and the New York Puppetry in Film Festival at the Brooklyn Academy of Music. In 2018, I was nominated, and selected to perform at the National Puppet Slam where I presented my crankie, Indigenous. I have also received scholarships to perform and teach at the National Puppetry Festival. In 2018 I was invited to the National Papercutters Guild Festival to perform, teach workshops, and present a talk. Unofficially, I am often recognized by individuals or organizations with requests for commissions. For example, in 2016 I built a moving panorama (a giant crankie) for a film displayed at the American Revolutionary Museum at Yorktown. I am also recognized for the influence of my early work on helping to revitalize the crankie community and interest in this historical art. Because of this, I have been called the "Jane Appleseed of Crankies" or, in Baltimore, the "Matron Saint of Crankies". I've been invited to teach and perform all over the country. 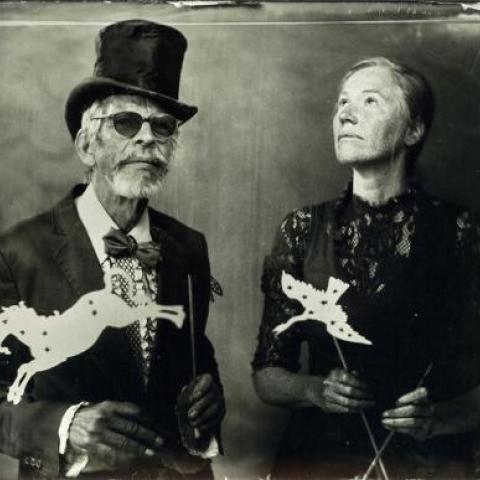