Joan Cox (born 1969) is a figurative painter who focuses on intimacy and family relationships in the lesbian community. Images of female couples in both painting and photography have been repressed, hidden, or explained as erotic material for the male gaze. Working in large-scale figurative painting, Cox adheres to the notion that representation matters. She seeks to portray dynamic, complex, sensual, sexual, and loving relationships between women—normalizing them. Paintings of women in intimate settings celebrate the female gaze while they intentionally subvert the male gaze by having the two engaged with each other and not reclining sleepily for viewers’ consumption. Often Cox paints one of the figures as androgynous, as if challenging viewers to recognize that these are lesbians, and not heterosexual couples.

While her subjects are generally friends and family, even an occasional self-portrait, the figures are often placed in settings that nod to art historical precedents in an effort to supply the canon with images of lesbian love that have been clearly missing until now. Because the lesbian perspective has been denied for so long in painting, Cox’s socially relevant paintings open up that dialogue through a complex investigation of cultural norms, sexual identity, and body politics. “My recent work depicts taboo intimacies between women—acknowledging and emphasizing the female gaze. My work opens up a dialogue about the increasingly open presence of lesbian couples in contemporary society and the lack of their presence in the history of Western art.”

Based in Baltimore, Maryland, Cox is a painter and photographer, as well as a graphic designer and writer. She earned a BFA from Towson University and an MFA from Massachusetts College of Art's program at the Fine Arts Work Center in Provincetown. Her work has been shown nationally and can be found in a host of private collections. 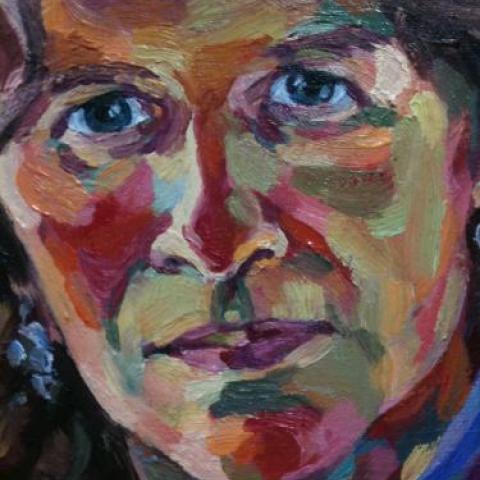